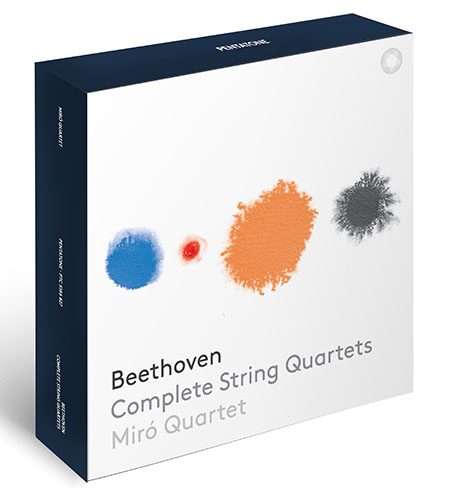 As the decade comes to a close, the world is in a state of reflection — observing the drastic shifts that have occurred to land us in this constant state of upgrading, updating, and consuming new material, much to our own exhaustion. For lovers of classical music, though, this next decade will begin with the celebration of a timeless figure in the canon, Ludwig van Beethoven.

Countless institutions and ensembles all over the globe are dedicating 2020 to celebrating the composer’s 250th birthday, a testament to the lasting impact his music has made, even in a world so fixated on deeming things obsolete. While this year of Beethoven is certainly a treat, at least one ensemble has been immersed in his chamber works for more than a decade.

The Miró Quartet began recording the Op. 18 string quartets in 2004, and released an eight-disc box set of the complete quartet cycle this past month on the Pentatone label. The completion of this project was not only in time for the start of Beethoven’s 250th year, but also marked the 25th anniversary of the Miró’s founding.

Having embarked on this musical journey around the same age that Beethoven began writing the quartets, the Miró has been able to grow through these works both technically and personally, tirelessly constructing interpretations informed by Beethoven’s own life. This level of dedication might seem overzealous to some, but the results speak for themselves.

The technical precision of the ensemble is made apparent from the opening phrase of Op. 18, No. 1. Their flawless execution of unison material, both beautifully balanced and tuned, makes for a lasting first impression on the listener. This foundational excellence is present in all of the works, and allows the music to gracefully unfold, with a clear and open sound from all four voices. This clarity makes the plethora of fast passagework so effective, giving direction and intent to each and every phrase.

As the cycle develops, the Miró adapts with it, expanding from their joyous and playful Op. 18 approach to a much broader range of sound worlds. Mirroring Beethoven’s own departure from strict classical structures, the Miró’s interpretations of the Razumovsky quartets hold onto the brilliance of earlier works while beginning to incorporate a more intense vibrato, bolder phrasing, and a greater inclination towards risk-taking by the ensemble overall.

These modifications are especially present in the extended development sections of the middle quartets, like the first movement of Op. 59, No. 1. Here the Miró approaches the fuga with an effortless momentum that passes between all members of the ensemble. Then they hit the brakes on a diminished harmony that not only creates tension, but also highlights the harmonic exploration Beethoven was doing at the time.

These stark contrasts in color carry through the remainder of the cycle. The Miró fully embraces each opportunity to construct a thoughtful phrase in their collective efforts to make even the most convoluted moments of the Beethoven quartets digestible.

Whether transitioning from a fiery five-minute opening in the Große Fuge to a lullaby without a moment in between, or navigating through perplexing polyrhythms in the second movement of Op. 135, the Miró maintains the technical standards set from the early quartets. No matter what challenges Beethoven lays out, the Miró Quartet rises unfailingly to the occasion.

Beethoven’s string quartets enter the lives of many young, aspiring chamber musicians without being performed to their full potential. The Miró’s release of the completed cycle is not only an incredible feat, but also demonstrates a process that has yielded fantastic results. This set of recordings, like Beethoven himself, deserves to be celebrated for many years to come.

Romantic love has worked its magic and wrought its afflictions on humankind in similar ways throughout history. Last weekend, Cleveland’s Les Délices joined Boston’s Blue Heron to chronicle how 14th-century European composers addressed that subject. The matrix for the collaboration between the ensembles was the celebrated Roman de la Rose, whose earliest layer by Guillaume de Lorris dates from ca. 1230. END_OF_DOCUMENT_TOKEN_TO_BE_REPLACED

Despite predictions of snowy weather, there was a full house and enthusiastic audience at the Bop Stop on Friday evening, January 17, for the latest concert by the Cleveland-based new music group No Exit, collaborating with their Twin Cities counterpart Zeitgeist. The program was concise and wildly varied, with several first performances. Each work contained imaginative soundscapes and alluring musical ideas. END_OF_DOCUMENT_TOKEN_TO_BE_REPLACED