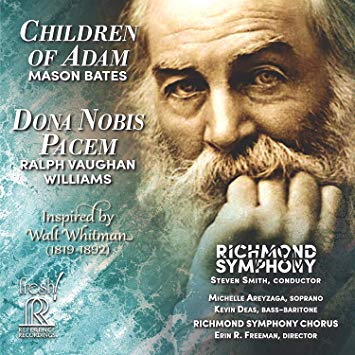 Steven Smith, a former assistant conductor of The Cleveland Orchestra who maintains a foothold in Northeast Ohio as music director of the Cleveland Chamber Symphony, spends most of his time in Virginia these days. His recent recording of Mason Bates’ Children of Adam: Songs of Creation and Ralph Vaughan Williams’ Dona nobis pacem with the Richmond Symphony Orchestra and Chorus offers excellent performances of two very different works, each largely based on poetry by Walt Whitman.

Vaughan Williams’ cantata has been well-known since its 1936 premiere, when it was commissioned for the centenary of that famous Yorkshire organization, the Huddersfield Choral Society. As the rumblings of a second world war were reverberating through Europe, Vaughan Williams turned to three Whitman poems — Beat! beat! drums!, Reconciliation, and Dirge for Two Veterans — which evoked the horrors of armed conflict. He combined them with the Agnus Dei of the Mass, John Bright’s The Angel of Death, and verses from the Hebrew Bible into an affecting plea for peace, ending with the Angel’s message to the shepherds from the Gospel of Luke.

The centerpiece is the Dirge, a setting the composer had already composed in 1914 as the guns of August were heralding the beginning of the First World War. Its sad Dead-March, a procession to the double grave of a son and his father, is chilling, and its inexorable progress is shaped both with restraint and drama by Smith and his forces.

The first part of the album presents a work that the Richmond Symphony commissioned from Mason Bates to celebrate its 60th Anniversary. In this case, Bates set three excerpts from Whitman’s Children of Adam, separated by a pair of Hebrew psalms, a little Algonquian prayer of thanksgiving for Virginia’s Turtle Island, two poems by Carl Sandburg, and one of the creation stories from the Book of Genesis.

The two similarly-constructed works on this CD make for some fascinating comparisons. Nothing could be more British than Vaughan Williams’ text settings and orchestrations, and probably nothing more American than those of Bates. Vaughan Williams uses percussion judiciously, restricting himself to drums, cymbals, and the occasional triangle until the very end of the cantata, when bells and glockenspiel create a festive din during the “Gloria to God in the Highest” coda.

Bates brings out his whole battery of percussion — including bells, castanets, tambourine, and wood blocks — early on in a colorful, exuberant orchestration reminiscent of Bernstein’s Chichester Psalms. That may be too much too soon, but it works well in the final Whitman poem, To the Garden, the World, which finds the poet at his most euphoric: “Lusty, phallic, Bathing myself, bathing my songs in Sex, Offspring of my Loins.”

Smith and his forces present Bates’ music vividly and with complete commitment. In a nice gesture toward inclusion, and probably also as a memento of the Orchestra’s anniversary, every performer is credited in the liner notes.

With this work, premiered in 1907, Sibelius offered a bold departure from the explosive emotionalism so prevalent in late-Romantic era music. This symphony was a renewed embrace of Classicism’s purity of form and melody, and one that, oddly enough, left many initial audiences of the day somewhat bewildered. END_OF_DOCUMENT_TOKEN_TO_BE_REPLACED

After eating a Po’boy from The Dawg Bowl Cajun food truck, I caught the first half of Brian Culbertson’s show in The Connor Palace Theatre. END_OF_DOCUMENT_TOKEN_TO_BE_REPLACED