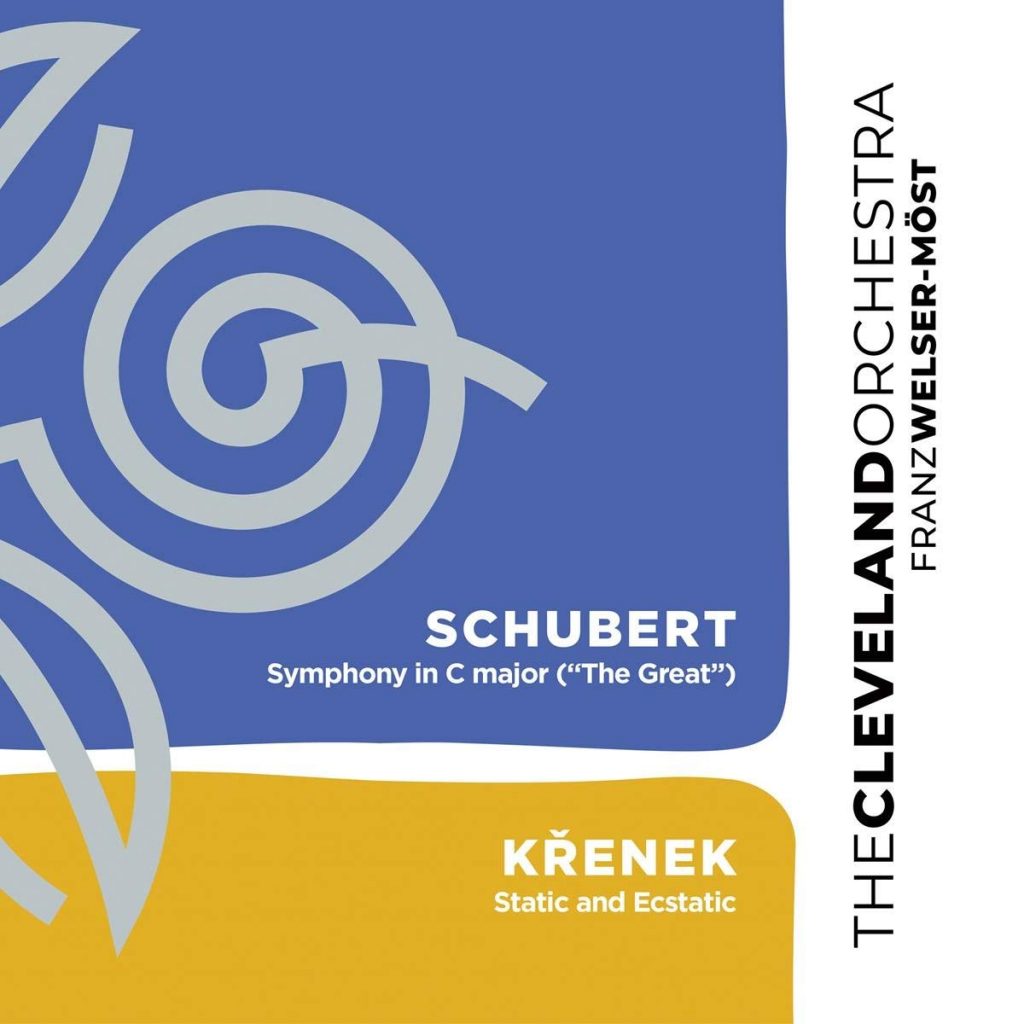 The latest entry from Franz Welser-Möst and The Cleveland Orchestra on the ensemble’s own record label brings another high contrast into view. Franz Schubert’s spirited and expansive “Great” Symphony in C (1826) sits alongside the ten miniatures that make up Ernst Křenek’s atonal and highly atmospheric Static and Ecstatic (1972). In brilliant performances captured live at Severance Hall just before the coronavirus shutdown in March, each work packs quite an artistic punch, though they both require a measure of patience from the listener.

Let’s start with The Cleveland Orchestra, which shines in every section and in every facet of playing. Two big takeaways are the coloristic flexibility of these musicians, and their heightened awareness of their own changing roles: flashing from one mood to another at a moment’s notice, and shifting between foreground and background like chameleons. They phrase with both patience and commitment — for example, pacing out crescendos more patiently and more dramatically than you expect, and weighing those climaxes expertly against those still to come.

The Schubert demands that. In four movements, it’s about an hour long, and was not performed in public until more than ten years after the composer’s death, in part because of its length. It’s beautiful and melodious throughout, but even in the hands of an orchestra that never plays a dull note, gesture, or phrase, some repetitive sections can test your endurance as a listener.

Stick with it, though, and often Schubert rewards you. In particular the second movement opens a couple of magical and surprising compositional doors, where high craft gives way to truly high artistry. And of course, it’s worth waiting for the dazzling conclusion to the first movement, and even more so the last, with its extraordinary energy and technical athleticism.

From that, we move to a thin high note in the violin and staccato stabs on the piano — “culture shock” as the richly expressive and unsettling music of Křenek begins to unfold. With intense contrasts of dynamics, articulation, and tone, The Cleveland Orchestra ushers you into this entirely different world whether you’re ready or not.

Aside from the language, another important contrast is the structure. Static and Ecstatic is laid out over ten movements, including some serial music. Most of them last between one and two minutes, and the longest goes for three, taking you on an entirely different type of musical tour.

The ten-part structure ends up being a bit overly ambitious, as a few movements rehash expressions and gestures in a way that doesn’t add so much. (With such short forms, one feels less forgiving for any single minute of less compelling material.) But be sure to take in the powerful atmosphere Křenek and this orchestra conjure in the first three movements, as well as the seventh, with its clever switching of roles across the ensemble, and the tenth, with its long and captivating crescendo — and the soft, distant, ominous snare roll with which that movement begins.

Northeast Ohio’s Les Délices has long been that rarest of beasts: a world-class organization so proud of its region (ours) and repertoire (distinct niches in pre-1800 music) that it never tries to be everything to everyone, paradoxically making a strong case for a broad, curious international following. In the December episode of its SalonEra series, the ensemble embraces its strengths and community to marvelous effect. END_OF_DOCUMENT_TOKEN_TO_BE_REPLACED

END_OF_DOCUMENT_TOKEN_TO_BE_REPLACED

Another I remember fondly is Gian Carlo Menotti’s Amahl and the Night Visitors.  Commissioned by NBC, the one act, made-for-television opera, premiered on December 24, 1951, at the network’s studios in New York’s Rockefeller Center. And now, through the wonders of technology, Cleveland Opera Theater has created a magical new production of the work which is available on demand through January 6, 2021 (Three Kings Day). END_OF_DOCUMENT_TOKEN_TO_BE_REPLACED

Jessen has now followed up with her second solo CD, Winter Chapel. Recorded on January 17, 2020 in Oberlin College’s Fairchild Chapel and available on Carrier Records, the album is a continuum in Jessen’s journey to push the musical boundaries of her instrument and herself as an improviser. END_OF_DOCUMENT_TOKEN_TO_BE_REPLACED