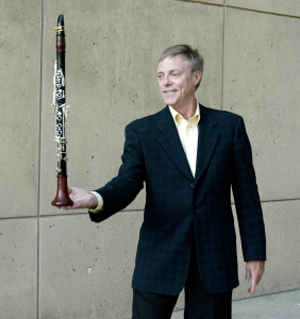 The Chagrin Concert Series continues on Sunday, March 6 at 3:00 pm in Valley Lutheran Church in Chagrin Falls with a free performance of trios and duos by violinist Hristo Popov, clarinetist Howard Klug, and pianist Eric Charnofsky.

Howard Klug is Professor of Clarinet in The Jacobs School of Music at Indiana University. We reached him in Bloomington, Indiana to ask about the music he and his colleagues will be playing on Sunday.

Daniel Hathaway: I read that you spent a bit of time in Cleveland when you were young.

Howard Klug: I moved to Fairview Park when I was a senior in high school — for the 9 months before I enrolled at Ohio State. I’ve been teaching at IU for 25 years and I was at the University of Illinois for 12 before that. That sounds like a career, almost.

DH: Have you performed with Sunday’s other musicians before?

HK: I don’t know Eric, but I’m looking forward to meeting and playing with him. Hristo and I met at a festival near Nuremberg, Germany last summer. We played the Khachaturian Trio we’ll be repeating on Sunday.

DH: Tell me about your program.

HK: It starts with easier pieces and gets thornier as it goes along. We’ll begin with Darius Milhaud’s Suite, which was originally incidental music for the play Traveler Without Baggage, dating from 1936. The first and third movements are Stravinsky-like, angular and biting. The second movement is gorgeous, and the fourth is bubbly with some hints of Brazilian music and even a transmogrified version of “For he’s a jolly good fellow.”

The Khachaturian Trio was written when he was a young student in Russia and virtually unknown. Both the Khachaturian and Bartók’s Contrasts share some folk-based similarities. While Khachaturian’s tunes are actually Armenian and Uzbekian, Bartók’s are his own. He integrated and assimilated folk elements, then created his own melodies in the flavor of Hungarian folk music.

Then there’s Meyer Kupferman’s Duo for Clarinet and Violin, dedicated to his amateur musician father. Kupferman was a clarinetist and knew all the nasty little things the instrument could do. It’s a free, rhapsodic piece where the violin is tonal and the clarinet atonal. It’s a peculiar, modal-sounding hybrid in a very engaging package.

DH: In addition to teaching, you’ve had an interesting and varied performing career.

HK: I started out in the Air Force Band during the Vietnam era. My friends and I decided that we’d rather carry clarinets than M16s. Then I went on to do a lot of doubling. I took my master’s degree in flute and dabbled in saxophone, but for the last two decades, I’ve concentrated on the clarinet.

DH: Do your current students do much doubling on other instruments?

HK: Usually only within the clarinet family, although IU does offer degrees in either 3 or 5 instruments, and a few of my students play a bit of sax. The world of Broadway doubling and jingle playing is dying. But in the teaching world, doubling makes you more marketable.

END_OF_DOCUMENT_TOKEN_TO_BE_REPLACED

We begin with the world premiere recording of Okeanos, Bernd Richard Deutsch’s concerto for organ and orchestra, featuring Paul Jacobs as soloist. The title refers not only to the Titan of Greek mythology, but also “to an idea of immense (and sometimes unfathomable) greatness and breadth, which conjures up in my mind the thought of the organ,” as Deutsch writes in his notes. END_OF_DOCUMENT_TOKEN_TO_BE_REPLACED

If you haven’t already warmed up to French Baroque clavecin music, Chicago-based keyboardist Jory Vinikour’s L’Unique: Harpsichord Music of François Couperin should make a strong impression on your musical tastes. The most prominent member of a musical dynasty second only to the German Bachs, François Couperin left a large treasure trove of keyboard works, 234 in all, arranged in 24 suites or Ordres.  END_OF_DOCUMENT_TOKEN_TO_BE_REPLACED

After weeks of watching online streams of archived concerts and ad hoc performances from quarantined musicians’ living rooms and bedrooms, it was thrilling to be able to advertise, preview, and report on two real-time webcasts last Friday and Saturday that embraced high production values and addressed the persistent issue of how to compensate musicians for online services. Saturday afternoon’s joint recital by Colin Davin and Jason Vieaux was sponsored by the Cleveland International Classical Guitar Festival, whose 2020 iteration, scheduled for that weekend at the Cleveland Institute of Music, vanished in the wake of the pandemic. END_OF_DOCUMENT_TOKEN_TO_BE_REPLACED