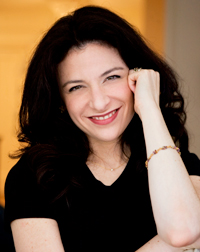 Hungarian conductor Iván Fischer’s Eine Deutsch-Jiddische Kantate: Die Stimmen der Geister is on the next program of the Chagrin Concert Series on Sunday, March 19 at 3:00 pm in Valley Lutheran Church in Chagrin Falls. Mezzo-soprano Lara Nie and trumpeter Richard Fields will be featured in the rarely-performed work.

“Marlon Daniel, who will conduct works on Sunday’s program, has worked with Fischer and is a great admirer,” Nie said in a telephone conversation from her home in New York. “Marlon and I were students at the Manhattan School of Music twenty years ago, and when he heard this piece, he thought of me. I finally got hold of the music, and it’s absolutely stunning.”

Nie described the work as a combination of cultural and folk poetry set to music that ranges in style from Bach to modal Jewish folk song to Yiddish theater music. “Fischer draws on Goethe and Rilke as well as folk poetry. Some of it is Kurt Weill-like and very emotional, and some uses Sprechstimme. It lasts less than 15 minutes, but there’s a lot going on.”

In a penetrating 2014 feature on Iván Fischer in The New Yorker, Alex Ross quotes the composer on the subject of his compositional style: ““Please let me emphasize that I am not a modern composer — do not expect modern music. As a performer, my head is full of all types of music.”

In a 2011 interview for the Jewish Chronicle, Fischer said, “I compose sometimes, usually simple, tonal, vocal works. Many of them have Yiddish texts. This is because I fear that without compositions this language may be forgotten. Others should also compose in Yiddish.”

Has Nie sung much in Yiddish before the Fischer work? “Only once in a Ravel setting. But I’m an Ashkenazi Jew and I heard the language spoken all the time by my grandmothers. A good friend whose family were in the camps in World War II was raised in Canada speaking Yiddish as her first language, and I’ve been having her pronounce the texts for me.”

Nie notes that a lot of people in Brooklyn speak Yiddish and are part of the movement to bring the language back. “A lot of Yiddish words have crept into English. But the accents have changed.”

Ivan Fischer is not so well-known as a composer. “People know him as an incredible conductor,” Nye said. “In this piece, he’s making a political statement. I’ve always wondered why Jews loved German culture and became a part of it themselves. There’s a Goethe poem on one of Fischer’s family gravestones. What draws us in? For 700 years, the Poles were the most accepting of Jewish culture, but we’ve not absorbed Polish culture in the same way.”

END_OF_DOCUMENT_TOKEN_TO_BE_REPLACED

Although it wasn’t the original plan to go online last weekend for the final round of the James Stroud Classical Guitar Competition, moving to a digital format suited the event well. Young performers Aytahn Benavi, Patricia Hernandez, Ian Tubbs, and Eric Wang played in the intimate setting of their own homes, giving everyone who tuned in a front row seat. END_OF_DOCUMENT_TOKEN_TO_BE_REPLACED

END_OF_DOCUMENT_TOKEN_TO_BE_REPLACED

Joining a long list of arrangers, Parker Ramsay has now transcribed the Variations for the modern pedal harp, an instrument for which he holds a master’s degree from Juilliard, in addition to a degree in history from Cambridge University, plus a master’s in historical performance (organ and harpsichord) and an artist diploma (organ) from Oberlin. END_OF_DOCUMENT_TOKEN_TO_BE_REPLACED