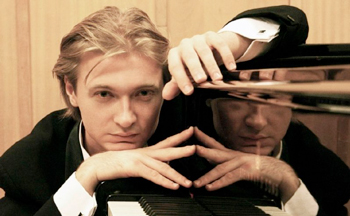 On Saturday, February 13 at Chagrin Valley Little Theatre, Canadian pianist Dmitri Levkovich will make his fourth appearance with Steven Eva and the Chagrin Studio Orchestra since winning second prize in the 2009 Cleveland International Piano Competition. The 7:30 pm concert, a benefit evening for the orchestra, will feature Levkovich in Sergei Rachmaninoff’s third concerto.

Since 2009, Levkovich has been busy performing in Europe, competing in competitions, and winning a prestigious German piano award (details of his activities can be seen on his website). We caught up with the 35-year-old pianist at the Cleveland Institute of Music, where he was busy practicing for his appearance this weekend.

DH: This will be your fourth appearance with Steve Eva and the Chagrin Studio Orchestra.

DL: The first time was right after the piano competition. Steve wanted me to play Rachmaninoff 2, the same concerto I did with The Cleveland Orchestra. The second time was the Paganini Rhapsody, and then we did a set of concertos: Rachmaninoff 4, and Prokofiev 1. Now it’s Rach 3. We just rehearsed for the first time yesterday, and everything looks good.

DH: Do you have a favorite among the Rachmaninoff concertos?

DL: I would have to choose between the 3rd and 2nd. They’re two different worlds, almost like they were written by two different composers. I think that the 3rd concerto is more satisfying pianistically. You really feel that you’ve covered it all when the piece is over — there’s nothing more to add. In the second concerto, I think it’s easy to fall in love with the gorgeous melodies, but pianistically it’s not as fulfilling.

DH: What do you like about working with Steve Eva?

DL: He’s not a conductor in the usual sense. He considers himself an amateur who likes to organize things. What fascinates me is his absolute lack of ego. When we work things out, he’s so passionate and interested in all my ideas. When it comes to a piano concerto, usually conductors don’t pay much attention to what pianists have to offer in the way of interpretation, even though pianists may spend a hundred or a thousand times as much time as a conductor does on a piece. Pianists have heard all the recordings and they’re usually more prepared to have an interpretation. Conductors aren’t usually very open-minded.

I remember when I played Rachmaninoff 4 with Steve. It’s not an easy piece to put together for any orchestra — I’m sure even The Cleveland Orchestra would need extra rehearsal time. It was my first time playing it and I didn’t realize then how well it went. Later I had to perform it elsewhere with an experienced conductor and a top orchestra — and it all felt a little out of sync. Over the years, I’ve come to appreciate how much difference Steve’s attitude makes.

DH: Most conductors and orchestras don’t devote much rehearsal time to concertos either.

DL: I remember once having just half an hour’s rehearsal with an orchestra — just one runthrough, and that was it. We’ll have three rehearsals on this piece, and it deserves it. It’s one of the busiest piano concertos, and one of the longest.

The only time before now when I played Rachmaninoff’s third concerto was here in Cleveland, and that was also my first time to play a concerto with orchestra. It had always been my dream when I was a student, but I feared I’d never have the opportunity. But then I won the concerto competition at the Cleveland Institute of Music. It’s very meaningful for me to play it here again after twelve years.

DH: Do you see new things in the piece after a dozen years?

DL: Absolutely. I’m more capable of thinking for myself now. Back then, I completely relied on the wonderful ideas I got from Sergei Babayan, but now I have my own ideas of how it can go — which are not too far from Sergei’s. I read an article about Rachmaninoff where he said that the most important thing in playing the piano is to have colors. That directly parallels what Sergei would always talk about in class. I know he still says that — I just didn’t realize that Rachmaninoff thought the same way. You don’t want to just play notes, you want some magic. So my interpretation is going in the same direction that my teacher’s was. 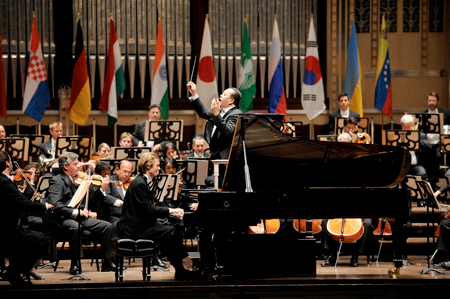 Dmitri Levkovich with Jahja Ling and The Cleveland Orchestra, 2009 (photo by Roger Mastroianni)

DH: When we last spoke, you were composing as well as performing. Have you kept up with that aspect of your career?

Dmitri Levkovich: I think the last time I composed was in 2011. There’s hardly time left for just making music. You want to survive as a performer and not start compromising by teaching or just playing chamber music. It’s a pretty difficult challenge. It doesn’t feel right to sit down and write music without thinking about the consequences. It actually feels irresponsible.

DL: That was my first CD on a record label, and it was a unique experience. I have to say that it’s really scary to record your first CD at the age of 35. Most people start earlier. But you know what to expect and you don’t stress out about unnecessary stuff.  As a first CD it turned out way better than I had hoped. All the critiques were positive. I don’t remember any negative remarks.

DL: Yes, although I’m Canadian and my parents live in Toronto, I’ve been studying and freelancing in the U.S. all my life. I’m living in New York in order to travel for work, but it doesn’t really matter where I live, as long as there’s a piano and an airport.