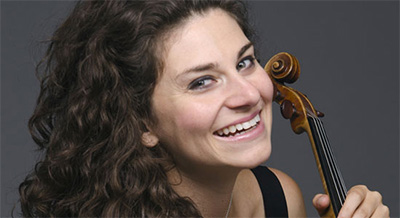 This weekend ChamberFest Cleveland will wrap up its eighth season with a pair of concerts that continue to explore this year’s theme of Under the Influence. On Friday, June 28 at 7:30 pm in the Cleveland Museum of Art’s Gartner Auditorium, “Precocious Virtuosity” will feature music by Mozart, Mendelssohn, and Moritz Moszkowski. And on Saturday, June 29 at 7:30 pm in CIM’s Mixon Hall, “French Connection” will include music of Poulenc, Stravinsky, Gérard Pesson, Françaix, and Fauré. Tickets are available online.

I recently sat down with violinist and ChamberFest’s co-artistic director Diana Cohen and pianist Juho Pohjonen at the epicenter of the Festival — the Cohen house.

When I arrived, a rehearsal of the Mendelssohn Octet was taking place in the living room while Frank Cohen was sitting on a sofa beaming with joy as he took in the beautiful sounds. In the kitchen and dining room, caterers were busy setting up for a reception that would include a performance by violinist Itamar Zorman and pianist Roman Rabinovich.

After the rehearsal, Diana and I found a quiet place on a side porch, confirming that Pohjonen would be joining us in a few minutes. I congratulated her on the eighth season and mentioned that many of the musicians have been part of the Festival from the beginning.

“I love it that we have had some continuity. Amy (Schwartz Moretti) and Julie (Albers) are back, but Orion (Weiss) is not here this year, but he has been here every other year,” Cohen said. “We want to bring new people into the group, but it’s so hard to say to someone ‘can you take a year off?’ because these people are part of the family. Julie is so sweet, she’ll say ‘if it’s time for me to take a year off that’s fine,’ but she’s one of my best friends, so it’s hard to do that.”

Cohen said that this season is an important milestone. “I do think that the number eight is some sort of marker — it’s an important number in Chinese culture — and it’s amazing to see the passage of time in that way. I just feel very lucky with how things have developed every year.”

Cohen, who also serves as the Festival’s executive director, noted that she has seen a lot of new faces in the audience this season. “I have also seen a bunch of new people who are my age, which is fun, and I do look forward to filling the hall with those people at some point.”

Planning a festival is always a juggling act between keeping it new and fresh while retaining the familiar. “In a way it has not evolved at all, but then again, every year is very different,” Cohen said. “It’s always fun to imagine how the chemistry of different people will work, and it always seems to work beautifully.”

Juho Pohjonen joins us on the porch. With his funny, relaxed personality he fits right into the conversation. Although the Finnish pianist may be a ChamberFest first-timer, he is by no means a stranger to some of the Festival regulars. “I’ve heard him play for years but mainly on recordings,” Cohen said, adding that she loves his recording of the Schubert C-major Fantasy with violinist Benjamin Beilman. 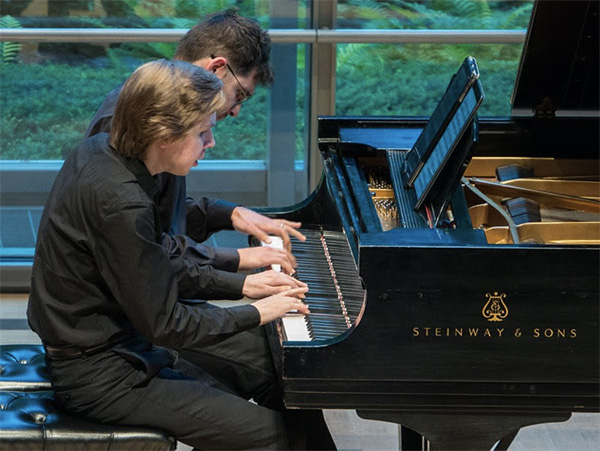 Cohen said that she has wanted to invite Pohjonen for some time. “Yura (Lee) plays with him in a trio and has been lobbying very hard for him, and Roman (Rabinovich) has mentioned him too.” Pohjonen and Rabinovich performed selections from Brahms’ Hungarian Dances for piano four-hands this past Tuesday evening (above, photo by Gary Adams).

When it comes to programming, Cohen is proud that ChamberFest has managed to avoid falling into a cycle of repeating repertoire. “I was looking through the programs of some of the other big festivals and some of them are programming the Brahms piano quintet every couple of years. We try not to do that because there’s so much good music to be played.”

That said, Friday’s concert will include the Festival’s second performance of the Mendelssohn Octet. “It’s a piece that feels like a good bookend for either the beginning or the end of a festival because it is such a celebration of life.” That concert will also include Moritz Moszkowski’s Suite for Two Violins and Piano in g, which Cohen called a beautiful showpiece. “Apparently he was an important figure in his time. So many composers’ music just kind of disappears so it’s fun to bring Moszkowski’s  back and keep it alive.”

The evening will begin with Mozart’s Piano Quartet No. 1 in g, K. 478. “This is an amazing piece,” Pohjonen said, “it’s as great as Mozart can be. The first movement is serious, like Don Giovanni, but then it gets more gentle, and the last movement is happy. It’s funny because everything I am playing this weekend is in g-minor — the Mozart, the Moszkowski, and the Fauré I’m playing on Saturday are all in the same key.”

“Pesson uses a lot of extended techniques. In fact it’s rare to find a piece of his where he asks the players to play their instruments in a way that they know, Cohen said. “This piece has a little more ‘normal’ playing than his others. I think of it as a ghost of the Brahms. It’s shadowy, evocative, and you hear things that don’t sound like Brahms, but you hear Brahms within it. I like the juxtaposition of it with the Stravinsky.” The first half will be rounded out with Françaix’ Trio for violin, viola, and cello.

The evening will conclude with Fauré’s Piano Quartet No. 2 in g. “It’s interesting because it was written quite early like 1885 or ’86,” Pohjonen said. It is so impressionistic yet it predates Debussy and Ravel. It must have sounded so fresh when it was composed — it was certainly not like anything else that was written at that time. The slow movement is like Clair de lune, so it totally inspired Debussy. And to get to play the last piece on the entire Festival is something special.

ChamberFest will make its third appearance on the Chautauqua Institution’s chamber music series on Monday, July 1 at 4:00 pm in Lenna Hall. Click here for information.

As for the future plans for ChamberFest, Cohen said that she, her dad, and the board are always talking about ways to tweak things. “The Rising Star program has been an amazing way to get to know young musicians,” she said. “We’re thinking about more collaborations, and of course, looking toward our 10th anniversary. I think our biggest goal is to make the infrastructure as secure as possible. We’re always asking people to make suggestions, and now that Juho is with us, he can make some too.”