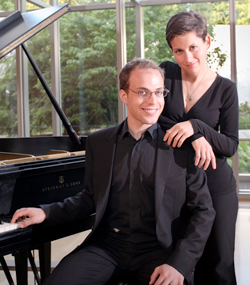 Pianists Anna Polonsky and Orion Weiss share a marriage as well as busy performing careers. Mirroring the way their lives play out, Polonsky and Weiss will play duo-piano, join in a concert of music for one-piano-four-hands, and perform with other musicians during ChamberFest Cleveland’s fourth season. We spoke to them separately by telephone (they were in different cities at the time) to ask about their appearances.

Cleveland-born Orion Weiss is involved in multiple ChamberFest assignments. “It’s like a twelve-course meal with many different dishes,” he said. “I’ll be playing Thomas Adès’s Darknesse Visible; a concert with Alexi Kenney at the Cleveland Public Library; the Mozart E-flat piano quartet; George Crumb’s Music for a Summer Evening with Roman Rabinovich; the little g-minor Rachmaninoff trio; Gershwin’s An American in Paris with Anna; then the four-hand concert.”

ChamberFest seems to inspire Orion Weiss to take on projects he’s never tackled before. “My first year at the festival was also my first time with the Bartók Sonata for two pianos and two percussionists. I loved doing it, and now I’m thrilled to be playing the Crumb for the first time — another modern masterpiece, where you have to go back and forth between plucking a string, finding a harmonic, strumming inside the piano, and even playing some percussion. It’s broadening all our horizons. Diana and Frank’s programming is so adventurous and far-reaching that I end up exploring things that maybe I wouldn’t get to do in the rest of my life.”

Weiss and Polonsky will play the two-piano version of Gershwin’s An American in Paris on Saturday, June 27 in CIM’s Mixon Hall. “It’s not often played at all,” Polonsky said. “It’s huge and very complicated, but it ends with a bang and the audience always goes wild.” That’s a piece the duo have performed before, and Weiss finds it “quite virtuosic. It’s tricky, gnarly, but extremely fun.”

Having each had an entire grand piano to themselves on Saturday, Polonsky and Weiss will share a single Steinway on Sunday afternoon, June 28 at 3:00 pm at the Dunham Tavern Barn, when they’ll play “Crossing Hands,” a program of four-hand music by Debussy, Schumann, Ravel and Dvořák. Polonsky spoke about the individual pieces in detail.

“Debussy’s Marche écossaise is a short, appetizer piece, a charming Scottish march — really a piece of candy. Schumann’s Bildung aus Osten is a fantastic, large-scale set of six impromptus loosely based on a Middle Eastern fairy tale that came to Schumann through a circuitous route. We’ll probably talk about the piece from the stage. It’s so ridiculously beautiful, and it ends on a philosophical note.”

Moving on to Ravel’s Rapsodie espagnol, I mention the observation Franklin Cohen made in an interview for this publication — that he found it fascinating to revisit pieces in their original piano configurations that had later been orchestrated, because he thought the piano versions allowed for more freedom by the performers. “I absolutely agree,” Polonsky said. “We do try to recreate Ravel’s orchestral colors, but that’s extremely difficult. He puts in everything and the kitchen sink. But I do like Dvořák’s Slavonic Dances better on the piano due to the freedom issue. You can play them really fast!”

Weiss added some of his own observations. “The idea of the festival is crossing borders, and here composers are writing pieces about different nationalities — except Dvořák, who is coming home. The Schumann is an amazing piece that indulges his Wanderlust with a little sense of the exotic. It’s based on a German novel about travels in Arabia. Ravel’s mother was Basque, and in the Rapsodie he revisits some of the tunes from his childhood. Dvořák’s borders are closed, but these are everybody’s favorite Slavonic tunes. The Slavonic Dances are especially tricky because you have to remember all the repeats you’re going to take — and you need a page turner with steel nerves!”

I suggest that another important border in the four-hand piano program is Middle C. Weiss laughs. “Anna and I always joke about the real estate issue of playing four hands on one piano. But we love each other so much that no matter how many elbows bang into each other, we’re very happy.”

“Bring married, we make a really good team,” Anna said. “Every pianist has such a personal take on technique that we have to work on mirroring each other.” Do they switch between treble and bass ends of the instrument for different pieces? “It works out about 50-50, but we joke about divvying up sides,” she said. “Orion says that I take everything I want, and he ends up playing the hard stuff! But there’s really an even give and take.”

Anna Polonsky will help bring ChamberFest to a conclusion by joining Franklin Cohen, Fernando Traba, Yura Lee, and Julie Albers in Ned Rorem’s Winter Pages for Clarinet, Bassoon, Violin, Cello and Piano on Wednesday, July 1 at 7:00 pm in the Blackstone Organ House in Bratenahl. After ChamberFest, she’ll go on to play in the Seattle Chamber Music Festival, return to New York to play a concerto, spend four weeks at the Marlboro Festival, fly off to engagements in Napa Valley, “and after that, I don’t even remember!” she said.

Orion Weiss has the rest of a busy summer in front of him as well, though he says he tries not to think too far in advance. “It’s always a bit daunting at the beginning with all the festivals and concerts. I find myself continually texting the presenters to check on details.”

END_OF_DOCUMENT_TOKEN_TO_BE_REPLACED

Rodgers & Hammerstein’s Cinderella was originally produced for television in 1957 — seven years after the animated Disney film was released — and starred Julie Andrews. According to the Rodgers & Hammerstein website, it was viewed by over 100 million people. END_OF_DOCUMENT_TOKEN_TO_BE_REPLACED

The story line has its origin in an 1855 play and an 1842 farce that Thornton Wilder mined for his 1938 play The Merchant of Yonkers. When that turned out to be a flop, in 1954 Wilder made the crucial decision to re-center the show around the character of the legendary marriage broker Dolly Gallagher Levi and renamed it The Matchmaker. END_OF_DOCUMENT_TOKEN_TO_BE_REPLACED

The Dodero Center for the Performing Arts at the Gilmore Academy in Gates Mills is one feature of an impressive campus. The auditorium is shallow, the stage is deep, and the ensemble played without a shell. Throughout the program, the sound, especially in instruments’ lower registers, tended to disappear. END_OF_DOCUMENT_TOKEN_TO_BE_REPLACED