Pianos with pins and tape on strings, a bass drum and tam tam, crotales, Almglocken, and vibes. Microphones were hooked up all around the instruments. The feed was sent to speakers around the room. Lighting designer Nicholas Houfek hung incandescent globes over the arrangement of instruments from thin black wires stretching across the beams.

Heidi Bearcroft drove from Toronto on a moment’s notice to substitute for Sivan Magen, and flutist Lorna McGhee and violist Matthew Lipman took their bows alongside her before playing Debussy’s Sonata for Flute, Viola, and Harp.

In one of Debussy’s Orphic sound scenes, there is a river at dawn, the wind of the dale slows against the long grass, and the flute and viola gambol over the harp. Bearcroft’s harp wrapped around the walls, McGhee’s flute gave the water sheen, and Lipman’s viola hung its branches and offered its reflection. The music filled the hall as if giving light, intermittently accompanied by the soft rain on the windows above. 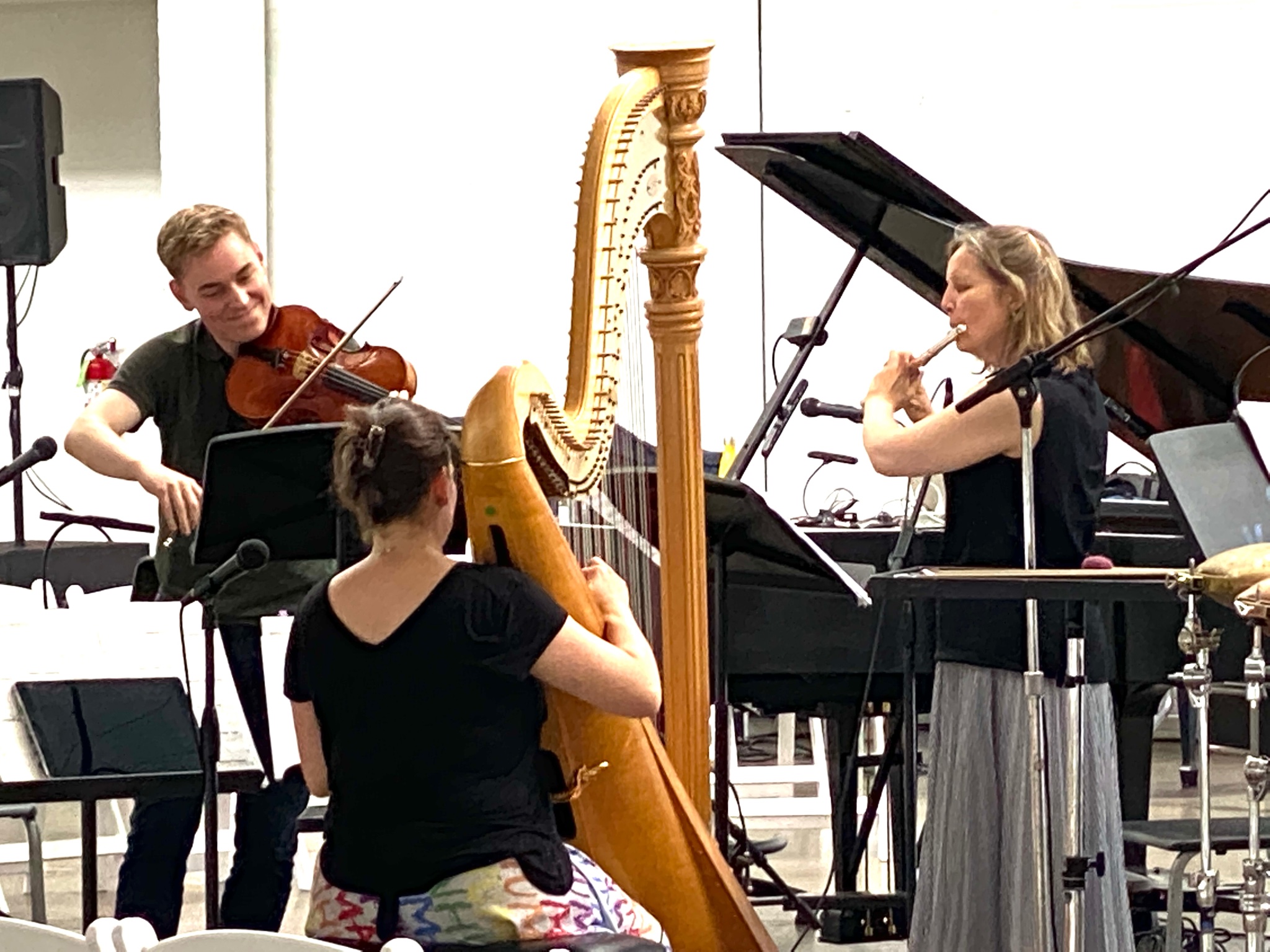 After intermission, Roman Rabinovich introduced Anna Thorvoldsdottir’s In the Light of Air as a geological piece, suggesting that the audience imagine they were inside a volcano for the four movements: Luminance, Serenity, Existence, and Remembrance. They were also encouraged to get up and walk around the space as the music was performed.

Everybody sat in the dark in silence for the first few minutes. Then the musicians blew gently into the microphones as if someone had opened a window in a mountain monastery. The percussion, played by Zubin Hathi, tapped and creaked and echoed. When he hit the bass drum with a mallet, an open thud reverberated across the room like continents slowly shifting over the earth. Juho Pohjonen put a rubber ball on a stick in the belly of the piano and rubbed it over the strings. Lipman and cellist Jonathan Swenson played sustains and harmonics with varying bow speeds and textures, and offered a few melodies. Bearcroft manipulated the pitch of her harp’s strings with an assortment of knick-knacks and instruments.

Triggered by sound, the lights brightened and dimmed—eyes closed, it looked like there was a low flame burning atop a blue field. The audience contributed coughs and quiet movements. A cup was knocked over. A cell phone pinged.

The piece was not aleatoric, as the simulation of the movement of earth clicked and clocked along with unexpected precision. Rabinovich lifted and dropped his hands slowly. His glasses lit up electric blue like he was some sort of magician initiating the geological procession, time adjusted to witness the scope of it.