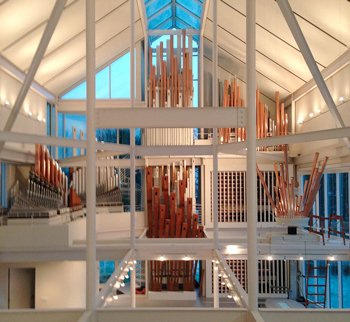 The 2015 season of ChamberFest Cleveland closed with a mostly American program in a spectacular venue: the angular, modernist home of Dr. Eugene and Janet Blackstone in Bratenahl along the shore of Lake Erie. The house, with its west-facing glass curtain wall, overlooks manicured lawns, and, after weeks of unending rain in Cleveland, there were sailboats on the lake as the sun set. The house also integrates a four-manual, custom-built pipe organ sprouting seemingly from every surface. The spaces not occupied by organ pipes (and a concert grand piano) were taken by audience members, in the main living area, an upper gallery and on the stairs.

The musical repertoire continued the festival’s imaginative combination of new and old, familiar and unknown. The concert opened with the pioneering minimalist Terry Riley’s 1965 (revised 2000) Tread on the Trail for unspecified instruments, but here performed by the ECHO Saxophone Quartet (Jeff Kinsey, Kyle Landry, Matthew Tracy and Eric Troiano). The work contains four lines of music which the performers play sometimes in unison, other times overlapping with each other. The music is based on jazz riffs and underlying, pulsating drones that, when assembled, take on the sound of an out-of-control jazz improvisation. The nature of the individual musical segments creates a much more harmonically adventurous and dissonant whole than do some minimalist pieces. The four young men in the quartet gave it a rousing performance, with interesting musical combinations and interactions to keep the pulse steady. 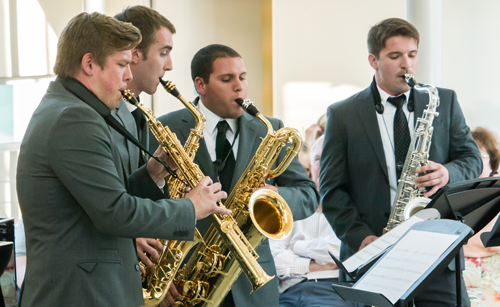 Charles Ives, the Danbury, Connecticut-born insurance executive and sometimes composer, wrote his Variations on “America” in 1891 when he was 17 years old. It is one of Ives’s few works for organ, and is probably best known to many listeners from American composer William Schuman’s transcription for orchestra. The variations are idiosyncratic, with several polytonal sections, a polonaise, a march, and a long pedal solo variation that has the aspect of “hold on to the bench and go for it.” 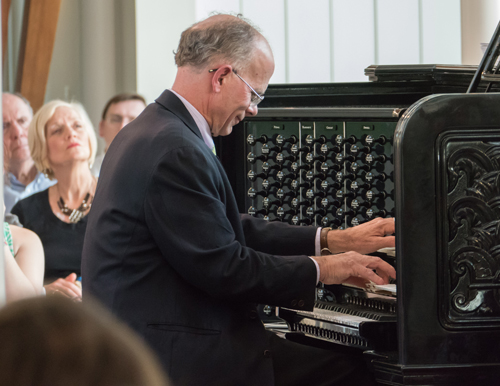 Nationally known concert organist Todd Wilson (who is Director of Music at Trinity Episcopal Cathedral in Cleveland) gave a brilliant and humorous performance of the variations on the Blackstone house organ. He showed the many colors of the instrument to good advantage, and added some minor and stylish improvisatory phrases along the way that Ives almost certainly would have approved. The organ is placed and voiced so that it fills the room with surround-sound, but doesn’t assault the listener at full volume.

The major recent — and undeservedly unknown — work on the program was Ned Rorem’s 1981 suite, Winter Pages, for clarinet, bassoon, violin, cello, and piano. ChamberFest stalwarts Julie Albers, cello, Franklin Cohen, clarinet, Anna Polonsky, piano, along with Fernando Traba, bassoon, and Katie Hyun, violin, who stepped in on very short notice, were the players. The suite consists of twelve, mostly short movements, each with descriptive titles, and each featuring the instruments in different combinations. The music is in Rorem’s pleasingly tonal idiom, sometimes angular and brusque (the opening “A Mirror”), sometimes a simple popular song (“Paris Then”), and ultimately ecstatic (the closing “Still Life” which reminded one in structure, if not in texture, of the last movement of Olivier Messiaen’s Quartet for the End of Time). 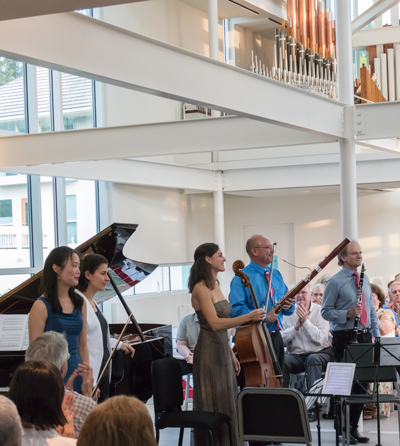 There was a feeling of nostalgia about the whole suite, well-captured by these performances. Each musician was given a moment to shine. Especially notable were Fernando Traba’s long bassoon solo in “Rue de Saints-Pères,” Julie Alber’s cello cadenza in “Still Life,” and Frank Cohen and Anna Polonsky’s beautiful “Valse Oubliée.” The ensemble playing was mostly excellent, although another day or so of rehearsal might have resulted in an even more striking performance.

The closing work of the program and the festival was Antonín Dvořák’s String Quartet in E-flat major, Op. 97, for which Hyun and Albers were joined by violinist Diana Cohen, and violists Dimitri Murrath and Jennifer Stumm. It was in this work that we heard the potential of the Blackstone home for chamber music. The space is live, but not reverberant, and large enough so that the instruments had the space to blend into a cohesive whole. The quintet was composed in Iowa in 1893, with themes resembling those used in Dvořák’s “New World” symphony, sometimes delicate, other times rollicking.

A striking moment at the end of the first movement was played without vibrato; the string quintet sounded almost like an organ (or perhaps a harmonium, which made several prominent appearances during the course of this festival). The third movement Larghetto is a set of variations, which showed off each performer’s virtuosity. The jaunty, dance-like dotted rhythms of the last movement rondo built to a rousing accelerando and crescendo to end the finale with big chords. What a fine way to end this festival, with Dvořák’s central European sensibility molding American-sounding thematic material. 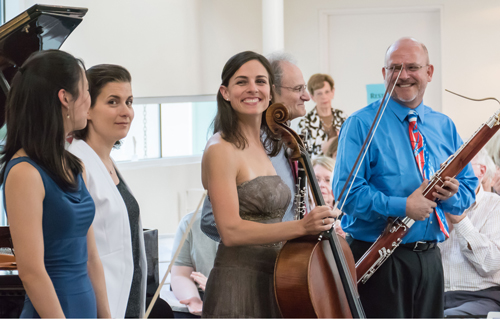 A few suggestions for next year’s festival: Listing performers’ instruments along with their names on the program pages would eliminate the necessity of flipping back and forth to their biographies at the back of the beautifully designed program book (whose text could use more careful proof-reading, by the way). And plotting out setup changes more carefully would help keep the momentum of concerts flowing. But these are minor growing pains in a complicated and otherwise beautifully executed series of musical events. Long may ChamberFest Cleveland continue.