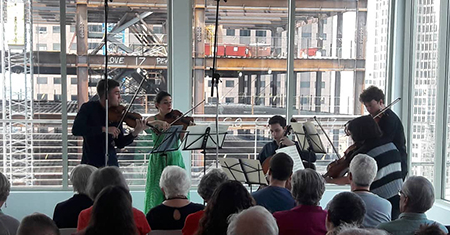 Rick Maron and Judy Eigenfeld’s Glass Box was filled with people celebrating a special Father’s Day brunch complete with chamber music on Sunday, June 17. The title of the third ChamberFest Cleveland concert, Let Them Loose, felt applicable as the musicians performed in front of windows looking out across the city towards the lake.

The informal performance began with Ysaÿe’s Sonata for Two Violins, famous for being too difficult for his royal student, Queen Elisabeth of Belgium. After explaining this and discussing the work’s impressionistic style, violinists Alexi Kenney and Yura Lee tackled the piece with skill and verve. The first movement, Poco lento e Maestoso –– Allegro fermo, opened with a declarative theme that grew more thoughtful and ruminative. Occasional dissonances were created when the violins played different chords at the same time. Both parts are equal in difficulty, and the violinists seemed like partners who were sometimes a little too strong-headed, resulting in a conflict that was complex and intriguing.

The finale, Allegro vivo e con fuoco, is sprinkled with humorous pizzicati that add character to the piece. Climbing, twisting, and turning, the music contrasted with the rectangular city background, almost as if the notes were ivy growing up and around its metalwork. Kenney and Lee reached higher and higher, creating many false climaxes until they ended at its loftiest point, bows in the air.

Violinist Diana Cohen, violist Tanner Menees, and cellist Oliver Herbert joined Kenney and Lee (now playing viola) for Beethoven’s Quintet in C, Op. 29. The piece is dubbed “The Storm” for the rumbling of the strings and sharp flashing chords in the final movement, but in fact is not quite as violent as its nickname. While executed beautifully with technical skill, the work does not quite capture the electric energy of a thunderstorm. Still, Beethoven’s love of disrupting expectations came through elegantly, as in the third movement, Adagio molto espressivo, when an abrupt tempo change brutally interrupts the soothing melody. The composer’s mischievous mood continues into the scherzo, when tremolos in the upper strings create suspense, like waiting for a curtain to rise.

While the notes might not have exactly been let loose on Sunday morning, they danced around the glass box in a lovely celebration of Father’s Day.

Jackson began the program with a recitation of Langston Hughes’ poem “Helen Keller” — the first of five poems by Hughes that served as interludes between each piece on the first half. END_OF_DOCUMENT_TOKEN_TO_BE_REPLACED

Pianos with pins and tape on strings, a bass drum and tam tam, crotales, Almglocken, and vibes. Microphones were hooked up all around the instruments. The feed was sent to speakers around the room. Lighting designer Nicholas Houfek hung incandescent globes over the arrangement of instruments from thin black wires stretching across the beams. END_OF_DOCUMENT_TOKEN_TO_BE_REPLACED

From the podium, Elim Chan set an ambitious tone for the evening. The rising star conductor, here in her Cleveland Orchestra debut, has a commanding style, and every twist and turn in Saturday’s performance tracked closely with her baton. END_OF_DOCUMENT_TOKEN_TO_BE_REPLACED