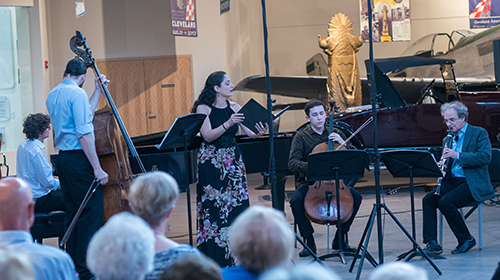 ChamberFest Cleveland offered a light-hearted program of mostly unusual repertoire on Tuesday, June 19, in the resonant Crawford Rotunda at the Cleveland History Center of the Western Reserve Historical Society in University Circle. Performers included several familiar members of the “ChamberFest family” as well as some talented newcomers.

The audience was seated on folding chairs semi-circling the rotunda, surrounded by beautiful antique automobiles as well as other artifacts including the gondola of the Goodyear blimp, and, in its specially-built pavilion, the restored carousel from the beloved Euclid Beach amusement park.

Soprano Amanda Powell, joined by clarinetist Franklin Cohen, cellist Oliver Herbert, bassist Nathan Farrington, and pianist Zoltán Fejérvári opened the program with musically conservative but alluring new settings of traditional Arabic and Sephardic songs.  The arrangements, by local jazz musician Paul Ferguson, emphasized the interconnection of culture and music in the medieval Mediterranean region. Sephardic Jews, Muslims, and Christians lived peacefully there for centuries until the Roman Catholic Inquisition forced the Jewish population to flee to the near east, the Balkans, and Northern Africa.

Powell gave brief summaries of each song: Spring love, sensual and provocative love, nostalgia for the old times, and a lullaby. With her bright, clear voice she inflected tunes with microtonal twists and turns typical of this music. The texts, printed with translations in the program, were not all sung — some were replaced by evocative instrumental stanzas. The acoustics of the rotunda sometimes gave unusual timbres to the instruments: the piano in particular took on a reedy sound.

Mark O’Connor is a renowned master of the fiddle, mandolin, and guitar, as well as a composer of music that crosses the boundaries of classical and bluegrass. Violinist Amy Schwartz Moretti joined Herbert and Farrington in two short pieces that have been recorded by O’Connor, bassist Edgar Meyer and cellist Yo-Yo Ma.

Emily’s Reel, for violin and bass, was the more harmonically complex of the two and is based on the traditional duple-meter dance that originated in medieval Scotland and later spread to North America. Increasingly complicated variations on the rhythm develop during the progress of the dance. The three players combined for Misty Moonlight Waltz, written when O’Connor was 16. All three musicians, especially Schwartz Moretti, made a fine and conscientious attempt at capturing “bluegrass performance practice.” 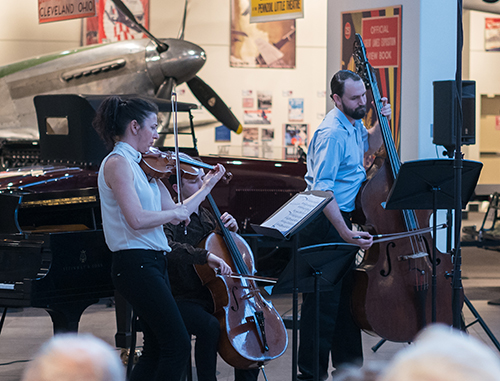 Following the O’Connor was Krzysztof Penderecki’s 2010 Duo Concertante for violin and double bass which provided a stark contrast to the Americana. The piece alternates recitative-like passages with fluttering music while later, the music resembles a march with almost pitchless pizzicati high in the bass. But after all the dissonance and agitation, the piece ends on a tonal minor chord. Moretti and Farrington were completely successful in capturing Penderecki’s mercurial complexity.

In a program change, the versatile Farrington, joined by Fejérvári, substituted for soprano Powell in Antonín Dvořák’s familiar “Songs My Mother Taught Me.” Although Farrington could have sung them — his bio mentions several professional engagements as a tenor — his bowed performances were nostalgic, mellow and beautiful. Sometimes words are not needed to move the soul.

After intermission, Lorna McGhee, principal flute of the Pittsburgh Symphony, teamed up with Fejérvári for Mieczysław Weinberg’s 12 Miniatures, Op. 29. Also known by his Russian name, Moises Vainberg, the Polish-born composer fled to Russia shortly before the Nazi persecutions, becoming one of the most notable Soviet composers of the mid-20th century.

Each movement is brief, sometimes not more than a minute or so. Some feature mostly piano or mostly flute, the other instrument only making a brief contribution. The solo flute “Introduction” was a technical showpiece. The “Waltz” was reminiscent of Shostakovich. McGhee accurately described it as a “diabolical waltz with Stalin that didn’t end well.” The flutist showed herself to be a technically brilliant and musically sophisticated player, and the piece gave Fejérvári more of a chance to show his considerable skills than earlier in the evening.

The program ended with István Kohán’s Konzertstück à la Feidman, a rollicking visit to the world of the klezmer clarinet. Martin Kyocera and Zikang (Tony) Wang, two of Franklin Cohen’s students at the Cleveland Institute of Music, were the soloists, with Fejérvári once again at the piano. The work is a virtuoso tribute to Giora Feidman, an Israeli master of the klezmer clarinet. The work highlights three different klezmer styles: Freilach (fast and festive), Hora (a slow circle dance), and a brilliant Presto. The trio had a good time with the never-ending stream of notes and though the audience was too dignified to get up and dance, it would have been appropriate.

Speaking with the conductor by phone in Cleveland this past Wednesday, I began our conversation by telling him that I had a wonderful conversation with Stefan Jackiw, who was singing his praises (read the article here). Especially how sensitive the conductor’s ear is with regards to color, which Jackiw noted is quite important in the concerto’s passacaglia. END_OF_DOCUMENT_TOKEN_TO_BE_REPLACED

The music isn’t easy to play, either. Over the course of two hours, all of the musicians brought fantastic focus to the unrelenting tricky rhythms and countless layers of parts, all of which require a high level of individual responsibility. Even in the moments of calm, the accompaniment remains perpetually unsettled. Adams — who made a sprightly presence on the podium — combines minimalist, repeating motives in gradual layers, which eventually become so dense they overwhelm the senses. Lisa Wong deserves special mention for her thorough preparation of the Cleveland Orchestra Chorus, as does Jennifer Rozsa for the Children’s Chorus, which made a brief but memorable appearance in the last few minutes. END_OF_DOCUMENT_TOKEN_TO_BE_REPLACED

Warner was a fitting choice not just symbolically, but also sonically. The combination of Baroque strings, theorbo, harpsichord, and organ created a nice blend and balance, allowing the opportunity for softer instruments to stand out. In Johann Rosenmüller’s Sonata à 5 in g, Doug Balliett’s violone pizzicatos resonated beautifully, and in Johann Heinrich Schmelzer’s Sonata in d, harpsichordist Elliot Figg became an equal player in the texture with his clever improvisations. The slight exception was Joshua Stauffer on theorbo — despite the instrument’s big physical presence on stage, he received little time in the spotlight. END_OF_DOCUMENT_TOKEN_TO_BE_REPLACED