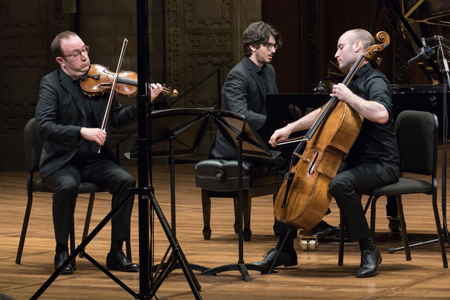 On Saturday evening, June 18 at the Maltz Performing Arts Center, Jewish patriarchs, matriarchs, and rabbis held works by Haydn, Kljuco, Britten, and Golijov in their embrace for a ChamberFest Cleveland concert titled “Isaac’s Dreams.” No matter how closely the pieces adhered to the theme, the performances were uniformly superb.

The evening began with a joke by Haydn. During the composer’s second sojourn in London, he decided to trip up an amateur violinist who liked to show off his high notes by writing him a piece that gradually nudged him into unplayable regions of the fingerboard. Somebody gave it the nickname “Joseph’s ladder” after the biblical angels’ stairway to heaven, and the moniker stuck even after the composer had repurposed the two-movement work for piano trio.

On Saturday, pianist Matan Porat seemed to have inherited most of the hapless amateur fiddler’s lofty non-stop lines, elements Haydn sometimes allowed him to share with violinist David Bowlin, while cellist Jakob Koranyi soldiered bravely on in a tertiary role. The dark tonality of e-flat minor (part of the original practical joke) gave way to sunnier passages in the first movement. The final was a delightful romp featuring dazzling unison passages between Bowlin and Porat.

Following her Cleveland Museum of Art appearance in “The Sarajevo Haggadah,” Franklin Cohen commissioned accordionist Merima Ključo to write a piece for ChamberFest. Her fascination with Miriam the Prophetess resulted in an attractive 10-minute piece of the same name for clarinet and accordion. It begins in near-silence and continues on a fascinating journey in which dance music tries several times to break out, but is frequently interrupted. As the piece grows in rhythmic complexity toward the end, clarinet and accordion whip themselves into a Hebraic frenzy. It had to be as much fun for Cohen and Ključo to perform as it was to watch. 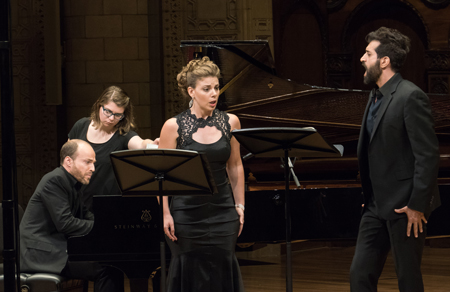 Told by Benjamin Britten through the Christianizing lens of the medieval Chester Mystery Plays, Abraham and Isaac relates God’s testing of the Hebrew patriarch by ordering him to sacrifice of his son rather than the customary ram. Britten underlines the cruelty of God’s challenge in this chilling tale by scoring the divine commands for the eerie combination of mezzo-soprano and tenor singing in close intervals.

Tenor Karim Sulayman and mezzo-soprano Marjorie Maltais took that a step further by singing God’s words standing back-to-back — not entirely successful because only those sitting in the middle of the Maltz Center could hear both voices in balance. Supported and punctuated by the superb, attentive playing of Orion Weiss (he’s so concentrated at the keyboard that you could blow off a firecracker and he wouldn’t wince!) Sulayman and Maltais did a masterful job of putting across every dramatic nuance in Britten’s score.

Saturday’s concert ended with Osvaldo Golijov’s The Dreams and Prayers of Isaac the Blind for Klezmer clarinet and string quartet, a stream-of-consciousness meditation inspired by the theories of a 13th-century Provençal rabbi and mystic. The composer imagines its three movements, though wordless, to reflect the historical languages of the Jewish people — Aramaic, Yiddish, and sacred Hebrew. 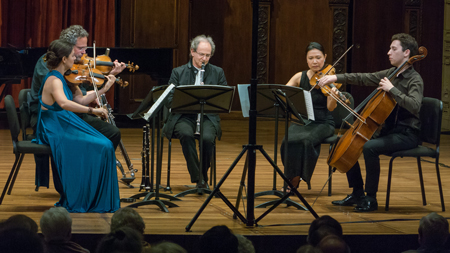 Armed with clarinets in three keys plus bass clarinet, Franklin Cohen joined violinists Diana Cohen, Yehonatan Berick, violist Hsin-Yun Huang, and cellist Oliver Herbert in a wide-ranging fantasy that lamented, danced, and wailed its way through a wide swath of emotions. Franklin Cohen is always intensely physical in his playing, but Golijov inspired new levels of somatic commitment from Cohen as well as Berick — whose feet both left the ground when the dance segments heated up.

The Maltz Center is capacious, its stage large enough for a symphony orchestra. In the hands of less robust players, chamber music might get a little lost there. But on Saturday evening, ChamberFest’s thirteen performers filled the hall with music so passionate that it excited every atom of air in the space, and doubtless moved every heart in the large crowd.

END_OF_DOCUMENT_TOKEN_TO_BE_REPLACED

Rodgers & Hammerstein’s Cinderella was originally produced for television in 1957 — seven years after the animated Disney film was released — and starred Julie Andrews. According to the Rodgers & Hammerstein website, it was viewed by over 100 million people. END_OF_DOCUMENT_TOKEN_TO_BE_REPLACED

The story line has its origin in an 1855 play and an 1842 farce that Thornton Wilder mined for his 1938 play The Merchant of Yonkers. When that turned out to be a flop, in 1954 Wilder made the crucial decision to re-center the show around the character of the legendary marriage broker Dolly Gallagher Levi and renamed it The Matchmaker. END_OF_DOCUMENT_TOKEN_TO_BE_REPLACED

The Dodero Center for the Performing Arts at the Gilmore Academy in Gates Mills is one feature of an impressive campus. The auditorium is shallow, the stage is deep, and the ensemble played without a shell. Throughout the program, the sound, especially in instruments’ lower registers, tended to disappear. END_OF_DOCUMENT_TOKEN_TO_BE_REPLACED