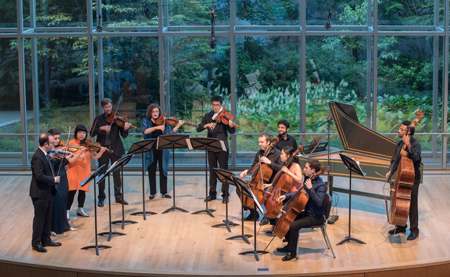 With the theme of Cycles: Phases, the sixth ChamberFest Cleveland opened Thursday evening, June 15, in Mixon Hall, at the Cleveland Institute of Music. The theme reflects on “the complexity of the human experience at each stage of life, and ultimately circles around all types of musical, political and emotional phases.”

The concert showed off the qualities we have come to expect from ChamberFest: brilliantly imaginative programming, with a mix of old, new, familiar, and unfamiliar works, in superior performances by (mostly young) musicians hand-picked by festival directors Franklin and Diana Cohen.

J.S. Bach’s Brandenburg Concerto No. 3, scored for 3 violins, 3 violas, 3 cellos, double bass, and harpsichord, opened the concert. The performance was characterized by tight ensemble and crisp tempi. Played on modern instruments, the work’s dynamics were broader than they might have been with period instruments, but the musicians showed recognition of historically informed performance practice.

Bach did not compose a second movement, only a final cadence, so performers are left to devise their own solution. For this performance, harpsichordist Roman Rabinovich improvised a short cadenza on a descending bass line, and the ensemble joined for the cadential chords. The ensemble played the third movement, Allegro, at a breakneck speed, tossing off Bach’s dialogue of traded musical phrases with aplomb. 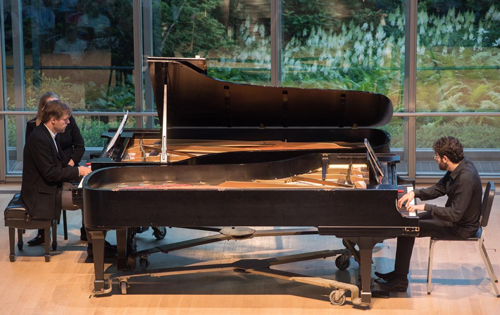 John Adams’s Hallelujah Junction for two pianos, performed by Rabinovich and Andrius Žlabys, was the highlight of this concert. The title of the work comes from a truck stop near the California-Nevada border. The musical “junction” is the complex interlocking of musical motifs between the two pianists. The three sections are played without pause, and the “hallelujah” of the title comes across rhythmically at various points — for example, in the first section three accented chords mimic the rhythm of the last three syllables (“le-lu-jah”). Toward the end of the last section, Adams riffs on Handel’s rhythms in his “Hallelujah Chorus.”

The ensemble difficulties are fearsome — the pianists play almost non-stop and at all dynamic levels, from ethereal passages to pounded, bell-like chiming. Playing with flash, Rabinovich appeared more fluent in Adams’ style, while Žlabys seemed to be working harder. But this is tough music, period, and the outcome was thrilling. There was a spontaneous cheer from the audience at the end, even before the applause began. 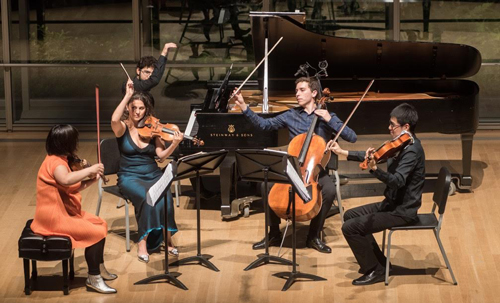 Edward Elgar is known for his symphonies, oratorios, and instrumental concertos, but he also wrote a great deal of chamber music. The second half of this concert was given over to Elgar’s undeservedly neglected Quintet for Piano and Strings in a, Op. 84. It is a mysterious and unsettling work — Elgar is known to have been deeply affected by the Great War, but no evidence exists that the catastrophe of the war especially influenced this piece.

After a disquieting, slow introduction, the first movement progresses to a stormy Allegro, with crashing piano chords and furious string writing. At its center, a long pianissimo cello note melts into a lyrical passage, before the Allegro returns. After all the drama, the movement ends quietly on a dry pizzicato note. The Adagio second movement begins as a string chorale, and the piano enters quietly, leading into music of rapturous lyricism, the cello featuring prominently in several solo passages. The closing Allegro returns to musical material from the first movement, this time more playful.

Violinists Yura Lee and Diana Cohen, violist Zhanbo Zheng, cellist Oliver Herbert, and hardworking pianist Roman Rabinovich (in his third outing of the evening) were first-rate and gave Elgar’s Quintet a persuasive reading, alert to each other, bending phrases and rhythms to bring out the inner workings of the music.

END_OF_DOCUMENT_TOKEN_TO_BE_REPLACED

This year the majority of the concerts are being held at a single location, the magnificent Grove Amphitheatre in Mayfield. Although the venue has no permanent seating, lawn chairs and blankets are the perfect solution. Picnics are encouraged and the responsible consumption of alcohol is permitted. Think Blossom Music Center on a smaller scale and you’ll get the picture. END_OF_DOCUMENT_TOKEN_TO_BE_REPLACED

The series opener, “Legends,” celebrated the return of in-person concerts with music by Antonín Dvořák, Enrique Granados, Paul Wiancko, and Franz Schubert. The musicians displayed the wide range of expression and color, enchanting communication, and technical brilliance that chamber music can provide. END_OF_DOCUMENT_TOKEN_TO_BE_REPLACED

Music director Franz Welser-Möst set the stage in his introductory video remarks, describing the Berg era as “the ‘Roaring 20s’ aftershock of World War I, a blooming of musical styles never experienced before or since.” END_OF_DOCUMENT_TOKEN_TO_BE_REPLACED

Aside from that, the beautifully curated program primarily features captivating performances of solo works that are presented in a logical progression of sound and temperament. END_OF_DOCUMENT_TOKEN_TO_BE_REPLACED