WCLV listeners and audience members in Ideastream’s Smith Studio were treated to “Nosh at Noon,” an unofficial inaugural concert on Wednesday, June 15. The Young Artist Recital featured violinist Alexi Kenney and cellist Oliver Herbert performing an arrangement of J.S. Bach’s Two-Part Inventions, as well as Zoltán Kodály’s Duo for Violin and Cello, Op. 7. Both instrumentalists are natives of the Bay Area and met playing at a house party there a year ago.

Violinist Kenney returns for his second season of ChamberFest after an eventful year of receiving both a 2016 Avery Fisher Career Grant, and the loan of the 1714 “Joachim-Ma” Stradivarius from the New England Conservatory, where he is the only violinist in the Artist Diploma Program, studying with Donald Weilerstein and Miriam Fried.

Herbert, who is a newcomer to ChamberFest this season, currently studies at the Curtis Institute of Music where one of his professors is former Cleveland Orchestra member and current New York Philharmonic principal Carter Brey. His virtuosic cello adventures so far have taken him to Carnegie, Walt Disney, and Seiji Ozawa Halls, as well as playing principal cello in the San Francisco Symphony Youth Orchestra and the National Youth Orchestra of the United States.

As WCLV’s Robert Conrad gave the signal, the duo rocketed off into Bach like racehorses. This rendition consisted of Inventions Nos. 1, 4, 6, 8, 9, 13, and 14. Their tempo was fast, yet steady, and their technique was flawless. The two conversed beautifully, creating a sound full of character that flowed seamlessly, but never too sweetly.

After an intermission interview, they proceeded with the Kodály Duo, a centerpiece of the scant violin-cello repertoire. In this often muddy-sounding piece, Kenney and Herbert flourished, playing with clear, vibrant directness. Though the music zig-zagged into all corners of their instruments’ capabilities, they never lost a beat. Herbert’s brief solos were particularly heart-wrenching, and Kenney’s intonation was simply stunning. 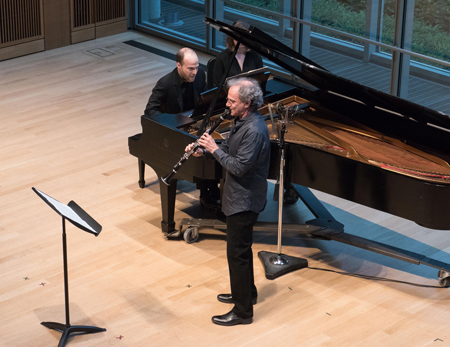 The following evening in CIM’s Mixon Hall marked the festival’s official beginning. The concert, titled “Schumann Fantasies,” was prefaced with a talk by Festival Speaker Patrick Castillo. Also before the concert began, festival Co-Artistic Director Franklin Cohen realized that he had forgotten his glasses. Watching the spry, former principal clarinet of The Cleveland Orchestra bounce from audience member to audience member trying on each person’s reading glasses made for a delightful sight (if only he could have seen it!) This episode also revealed the tight-knit community ChamberFest has created, and appropriate spectacles were eventually found.

Cohen joined the excellent pianist Orion Weiss for Robert Schumann’s Fantasiestücke. Their reading was introspective, Cohen wisped you along on a dreamy, reflective journey, which Weiss’s playing reflected and supported. Violist Hsin-Yun Huang, who tours with the Brentano String Quartet, joined the group for György Kurtág’s Hommage á Robert Schumann. The work captures the alter-ego personalities that Schumann developed as a critic, as well as the refined craftsmanship of both composers. The piece often transitions abruptly, even fiercely, but the instrumentalists didn’t bat an eye. Huang was able to play with fierce intensity and then sway seamlessly into a dolce passage. Cohen and Weiss continued to be at the top of their game, particularly when Cohen had to double on the bass drum for one note — the final note of the piece. That was ever so satisfying. 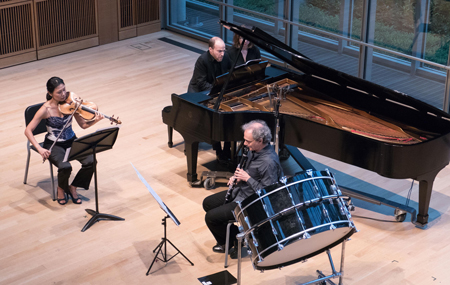 Co-Artistic Director Diana Cohen, concertmaster of the Calgary Philharmonic Orchestra, then joined Weiss for Schumann’s Intermezzo for violin and piano from the “F.A.E.” Sonata, named after violinist Joseph Joachim’s motto “Frei aber einsam.” Cohen played brilliantly, producing a fittingly sweet sound, and her calculated use of vibrato made for an especially compelling interpretation.

The piece was immediately followed by four movements of Stephen Coxe’s A Book of Dreams for accordion (Merima Ključo), percussion (Scott Christian), and piano (Weiss). Weiss shined throughout this work, at one point banging maniacally on the wood of the instrument. Ključo’s virtuosity and emotional directness demanded attention and admiration, from the meditative, deep bass growls she got out of the instrument to her devilish sforzandos. Christian provided an appropriately nuanced reading that ranged from contemplative to infernal.

The evening culminated in a masterpiece of the chamber repertoire: Schumann’s Piano Quintet in E-flat, Op. 44. Not only technically difficult, the work challenges performers to try to capture its spirit. Compelling pianist Matan Porat drove the whole work forward with playing that was strong, consistent, and flawless. David Bowlin, violin professor at the Oberlin Conservatory, added virtuosic flair and displayed a deep understanding of the music that was showcased with a remarkable balance of emotions. When Schumann allowed for it, violist and New England Conservatory faculty member Dimitri Murrath produced a rich, sonorous sound that let the romantic side of the composer bloom. Alexi Kenney and Oliver Herbert also collaborated in an unforgettably impressive feat that went far beyond textbook technique. This performance spoke as pure music.

ChamberFest Cleveland has started. The festival has furthered the community’s appetite for first class chamber music, and so far this season they have only served five-star meals.

END_OF_DOCUMENT_TOKEN_TO_BE_REPLACED

The strings-only work by Berg has made relatively frequent appearances on the Orchestra’s programs. In 2021, the musicians recorded it for the In Focus series, and it appeared again on last year’s European tour. Friday’s rendition maintained the group’s characteristic light and effortless playing, each section blending as much as possible to echo the work’s original form as a string quartet. At fifteen minutes total, the piece is quite short, but the dense encoded musical meanings require some extra-attentive listening. Splitting up the three movements ensured that each one could be appreciated on its own. END_OF_DOCUMENT_TOKEN_TO_BE_REPLACED