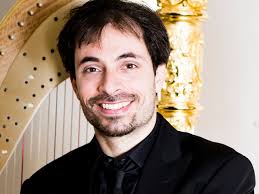 The sixth in a series of articles highlighting ChamberFest artists

“This is a great piece. Poe’s story is well-known,” harpist Sivan Magen said during a recent telephone conversation from his home in New York City. “André Caplet’s music follows the text very well. The music has a lot of energy, and is not angelic like so much of the music that is written for the harp.”

Tonight, Saturday June 25 at 8:00 pm in Harkness Chapel, Sivan Magen will make his ChamberFest Cleveland debut on a program titled Fairy(tales) & Tales of the Macabre featuring André Caplet’s Conte Fantastique, after Poe’s The Mask of the Red Death for harp and strings (score pictured below).

Born in Jerusalem, Sivan Magen studied at the Jerusalem Academy for Music and Dance. After completing his military service, he continued his studies at the Paris Conservatory and went on to complete his Master of Music degree at the Juilliard School. Magen is the only Israeli to win the International Harp Contest in Israel. He is also the winner of the Pro Musicis International Award, and in 2012 was the winner of the Borletti-Buitoni Trust Award. In addition to his busy international concert schedule, Magen serves on the faculty at the Brooklyn College Conservatory of Music. 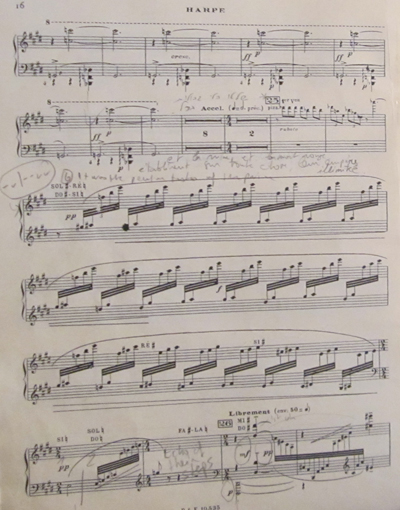 On Monday, June 27 at 8:00 pm at United Methodist Church in Chagrin Falls in a concert titled “Last Words,” Magen will be featured in Japanese composer Yoshihisa Taïra’s Sublimation for harp (score passage below). The program interleaves Joseph Haydn’s and Sofia Gubaidulina’s settings of the last words of Jesus on the cross. “Taïra studied at the Paris Conservatory with André Jolivet, Henri Dutilleux, and Olivier Messiaen,” Magen noted. “The piece was written in 1971, and it’s a very contemporary work even for its time. It’s comprised of a lot of small sections, and each of them takes about 20 seconds to play. So Taïra gives a lot of freedom to the interpreter.” 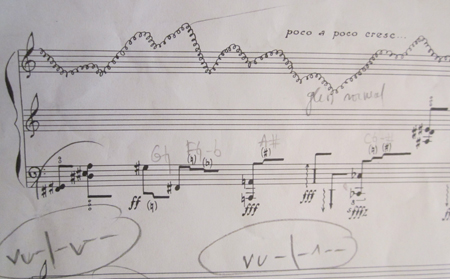 Magen said that American composer Sebastian Currier’s Night Time for violin and harp is a well-written piece. “Currier has a close connection to Marie-Pierre Langlamet, the harpist of the Berlin Philharmonic, so he knows how to write for the instrument.” On Tuesday, June 28 at 8:00 pm in Mixon Hall as part of a program titled “Shakespeare”, Magen will be joined by violinist Itamar Zorman for Currier’s work. In his composer notes, Currier says

The piece’s five short movements — Dusk, Sleepless, Vespers, Nightwind, and Starlight — share a sense of quietude, introversion, intimacy, and subdued restlessness. The instrumental ensemble itself, violin and harp, suggested to me right from the start a series of nocturnal moments, where a sense of isolation, distance and quiet thoughtfulness would prevail throughout otherwise thematically contrasting movements.

As much as Magen enjoys playing the more traditional harp repertoire, he is always on the lookout for new works that are being written for the instrument. What does he think is a mark of a good composition? “Good music is good music as long as it has something to say,” he said. “But too many times composers write for the harp like they are writing for the piano, and they don’t understand that the instrument is extremely resonant, especially in the low register. And many composers are scared of the pedals.” 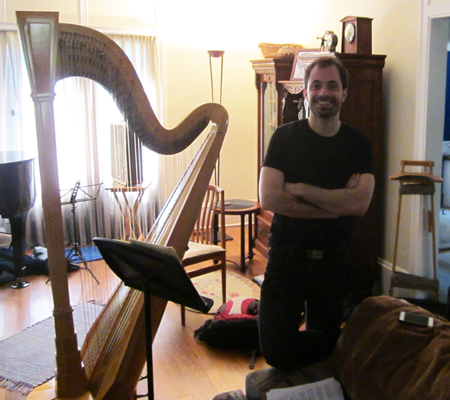 Magen admitted that it’s not always easy to make a living as a harpist. “But we are a resourceful people,” he said with a chuckle.

END_OF_DOCUMENT_TOKEN_TO_BE_REPLACED

The strings-only work by Berg has made relatively frequent appearances on the Orchestra’s programs. In 2021, the musicians recorded it for the In Focus series, and it appeared again on last year’s European tour. Friday’s rendition maintained the group’s characteristic light and effortless playing, each section blending as much as possible to echo the work’s original form as a string quartet. At fifteen minutes total, the piece is quite short, but the dense encoded musical meanings require some extra-attentive listening. Splitting up the three movements ensured that each one could be appreciated on its own. END_OF_DOCUMENT_TOKEN_TO_BE_REPLACED