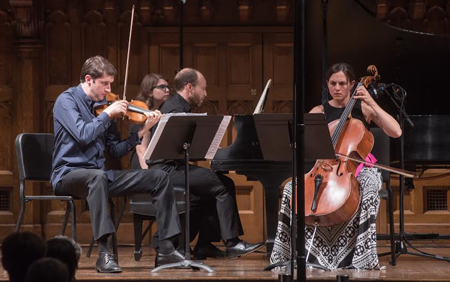 Violist Teng Li and pianist Orion Weiss opened the program with Robert Schumann’s Märchenbilder (“Fairy-Tale Pictures”), Op. 113. Schumann was a master of the art of character pieces — works that evoke particular thoughts and feelings without a specific narrative — and his efforts largely developed the genre. Digging through his diaries reveals that the first two movements were inspired by Rapunzel, the third by Rumpelstiltskin, and the fourth by Sleeping Beauty.

Li and Weiss began by passing off a dreamy melody, which wandered hypnotically, taking the listener to distant lands. Their delicate and expressive playing convincingly captured the fairy-tale set’s naïvety. Weiss conveyed the playfulness of a child through the whole piece, and the cheerful galloping of his playing in the second movement tickled the ear. Li’s rich, nostalgic playing was like a smile in sound, though her performance was already so beautiful, she could have used less vibrato in the finale.

The oddity of the evening was André Caplet’s Conte fantastique (“Fantasy Tale”) for harp and string quartet, after Edgar Allen Poe’s story The Mask of the Red Death. Harpist Sivan Magen began by introducing the plot: during a plague, a prince and his colleagues fortify themselves against the disease by throwing a party in his castle. A guest in a red mask arrives at the party and at every stroke of the clock a sense of terror overcomes the other partygoers — until midnight, when they all succumb to the “Red Death.” 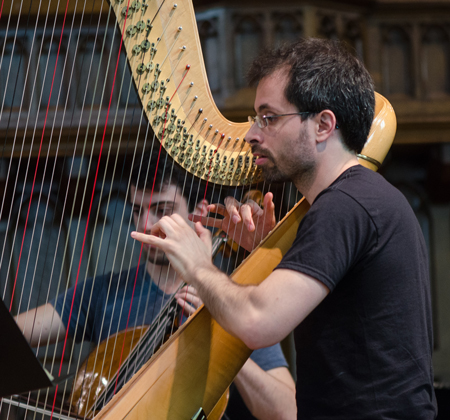 The quartet — Alexi Kenney and Yura Lee, violins, Dimitri Murrath, viola, and Timotheos Petrin, cello — fulfilled its role with artistic prowess, but the piece centered around Magen (above, in rehearsal). His foreboding chords at the outset sent shivers down the spine, and his ability to draw so many different moods and sounds from his instrument (including many glissandos and a chilling knock on the soundboard to signal the midnight bell) made for a captivating performance. With its satisfying instrumentation, this obscure programmatic work was a thrilling ride.

Weiss was joined by Roman Rabinovich for Maurice Ravel’s piano four-hand Mother Goose Suite. Though Ravel rejected the term “Impressionism” for his music, this piece, like Schumann’s, gives the listener a glimpse of a feeling rather than dictating a narrative.

A feeling of ethereal wonder ran through the whole interpretation. Weiss and Rabinovich played as one mind. Even their breathing was synchronized to a tee. Their crystal-clear sound allowed the melodies in the foreground to flow naturally alongside the color palette of harmonies in the background. This was beauty in simplicity.

The final piece was Charles Ives’s Piano Trio “TSIAJ,” named after the composer’s annotation of the second movement, “This Scherzo is a Joke.” Weiss was joined by cellist Julie Albers and violinist Noah Bendix-Balgley for the Wall Street insurance broker’s idiosyncratic work. The middle-movement scherzo quotes several American folksongs and hymns, such as My Old Kentucky Home and Ta-Ra-Ra-Boom-De-Aye.

Dissonance pervades all the composer’s oeuvre and creates an oddly beautiful sound in this trio. Ives once said, “Stand up and take the dissonances like a man!” — and they did. The ensemble’s playing was gripping in its clarity and technically flawless. Toward the end of the third movement, the sounds of the Cleveland Museum of Arts’ Solstice Party bled through the Harkness walls — Ives would have surely approved.

Finishing off a concert with Ives can be risky. What’s more, the evening’s selection of works came off as something of a hodge-podge. However, the risks were laudable and the performances magnificent.

END_OF_DOCUMENT_TOKEN_TO_BE_REPLACED

The strings-only work by Berg has made relatively frequent appearances on the Orchestra’s programs. In 2021, the musicians recorded it for the In Focus series, and it appeared again on last year’s European tour. Friday’s rendition maintained the group’s characteristic light and effortless playing, each section blending as much as possible to echo the work’s original form as a string quartet. At fifteen minutes total, the piece is quite short, but the dense encoded musical meanings require some extra-attentive listening. Splitting up the three movements ensured that each one could be appreciated on its own. END_OF_DOCUMENT_TOKEN_TO_BE_REPLACED