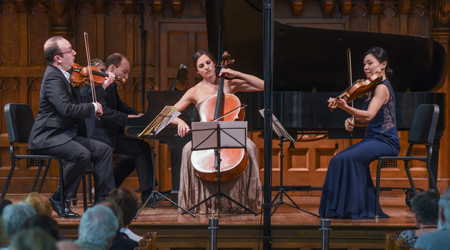 “Who’s Romantic?” may sound like the title of a reality TV show, but it’s actually the tagline for the third concert of ChamberFest’s 2015 season on Sunday, June 21 in the warm acoustics of Case Western Reserve University’s Harkness Chapel. Let’s take the question seriously: who is Romantic? ChamberFest presented Mozart’s E-flat Piano Quartet, K. 493, as its first case study.

Certainly, with its harmonic complexity, expressive nuance, and chromatic, minor-key shading, the quartet anticipates the high Romanticism of the 19th century, though it was written in 1786. No one listening to the sublime “Larghetto,” with its combination of passion and elegy, could miss the piece’s legacy in Schumann, Brahms, and even Mahler.

But late Mozart, however prophetic of Romanticism, preeminently belongs to the Classical era: this quartet also manifests a love of order, a commitment to form, and an aesthetic of balance, all qualities that Romanticism would later struggle to undo.

ChamberFest honored both sides of the stylistic border with a performance that was both utterly clear and deeply expressive. The string players — David Bowlin, violin, Hsin-Yun Huang, viola, and Julie Albers, cello — formed a tight ensemble, light and sprightly at times, declamatory or lyrical at others. Pianist Orion Weiss brought a lithe energy to the wonderful flourishes and runs that both drive and contain the forward movement of the quartet.

The second case study in “Who’s Romantic” was Schubert’s C-Major String Quintet. From late Mozart to late Schubert is about forty years — though the term “late” is tragically ironic for each of these short-lived composers. In its scope, variety, and sudden turns of mood, this magnificent work is unquestionably Romantic. Though written with an eye for classical forms — the movements follow each other in a conventional ordering, with clearly defined motifs and tonalities, punctuated by gorgeous melodic passages — the Quintet has a darker side, a propensity for suspense, and a heroism that faces danger with dignity and maintains a faith in beauty. 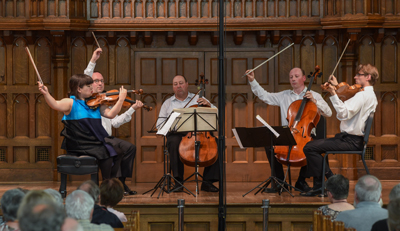 A key aspect of the Romantic is its love of the surprising, the unknowable, even the uncanny. Schubert’s Quintet is tinged through and through with the sense that the things we love in the world — beauty, happiness, peace — are deeply mysterious. In particular, one could hardly imagine a more mysterious movement than the second, an Adagio that begins with the utmost delicacy and devolves by the middle of the movement into an agitation reminiscent of Schubert’s Erlkönig (The Elf King). How does heartfelt distress suddenly arise in the midst of such sweetness? Does the sweetness, paradoxically, depend on the anguish at its core? As that 20th-century Romantic Wallace Stevens wrote, “Death is the mother of beauty.”

ChamberFest brings extraordinary players to these programs, and groups these players in ensembles that add up to far more than the sum of their parts. The splendid Yura Lee, playing first violin, spun Schubert’s long melodies as if pulling a thread out of the air. The inner voices (where much of the second-movement agitation occurs) were performed with passion and elegance by David Bowlin, second violin, Dimitri Murrath, viola, and Clive Greensmith, first cello. The second cellist, distinguished Guarneri Quartet veteran Peter Wiley, played from the center of the ensemble and visibly grounded the performance with his active communication and expressivity.

The question “Who’s Romantic?” is in the end unanswerable. But perhaps it’s not really about answers. Rather, what a joy it was to have the question so memorably posed. And how gracious of ChamberFest to serve ice cream on the lawn at the end of this lovely Sunday afternoon concert! There’s no question that both Mozart and Schubert would have approved.