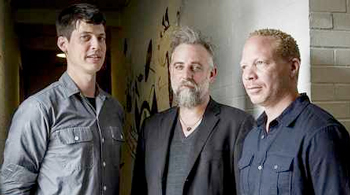 “I’ve been listening to Mat (Maneri) for a long time…and I just really loved his playing,” drummer and composer Ches Smith (left in the photo) told us in a telephone conversation. “I’ve seen Craig (Taborn) around and like what he does, but when a gig opportunity came along to improvise with both of them, I jumped on it. And that led to all of this.” The “this” Smith is referring to is the Trio’s debut CD on the ECM label, The Bell. On Saturday, February 20 at 8:00 pm, the Smith, Taborn, Maneri trio will present a concert at Bop Stop featuring through-composed material from the album designed to stimulate open-ended improvisation. The concert is a co-production with New Ghosts.

Since drummer Ches Smith, pianist Craig Taborn, and violist Mat Maneri debuted as a trio during the 2014 New York Winter Jazzfest the three musicians have dedicated much of their professional careers to making the album. Recorded at Avatar Studios in June of 2015 and produced by Manfred Eicher, the eight tracks on The Bell feature alluring chamber music compositions that are melodically appealing and harmonically rich, including masterful improvisations. From the opening title track until the final note of the concluding “For Days” fades away, The Bell invites listeners into a sonically satisfying world.

I caught up with Ches Smith just before the Trio embarked on their seventeen-concert North American tour. The following is an edited transcript of our twenty-minute conversation.

Mike Telin: Congratulations on the CD. I just finished listening to it and I like it a lot. For me, an attractive thing about it is that each piece works on its own, but the order in which they are placed really turns it into a cycle of tone poems.

Ches Smith: Thanks so much. I’m happy you like it. All of the pieces were written around the same time, and we actually had about twice as many pieces as ended up on the record. But each one is a stand-alone composition, and each one has sections that leave room for improvisation.

I agree about the placement of the tracks, but that was not my idea, that was almost entirely the producer’s doing. When we mixed the piece called ‘The Bell,’ I remember Manfred Eicher saying this should be the first track. As soon as he said it I thought, ‘That’s interesting’. He went from there and it was a really quick process, which is great because I tend to agonize over that kind of stuff. But when we listened to the recording in order I thought it was great. Manfred is also really great at picking takes.

MT: I’m impressed with the seamless transitions into and out of the improvised sections.

CS: Sometimes you want an abrupt change, but transitions are something that a lot of people in the New York scene are good at. And when you add the harmonic knowledge of Craig and Mat, it works. I can always hear when things are resolving into the next section — and that doesn’t always happen in free improvisation.

On top of the resolutions there’s also tension and release happening. We’re not conscious of any of this — we’re not saying this chord will move to that chord — but when I listen to the recording, I hear it happening. 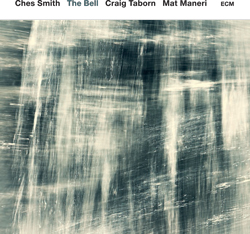 MT: I read an interview where you said that your collaborators affect the outcome of the written material. Could you expand on that thought a little?

CS: That’s true on a few different levels. One is that I’m not writing for a straight-up classical performer, I’m writing for people that I’m playing with, and who have their own individual approaches. Although I might have an idea of how a melody will sound, usually that idea pertains to what I know about the player who’s going to play it. And if they come up with a different way of playing it, I try not to impede on that process.

Mat is a good example of that because he has such a unique voice, which includes microtonal playing and things like that, and his phrasing is very particular to him. So I can say, ‘Oh, I can picture Mat playing this’, and hopefully he will surprise me with how he interprets it.

MT: This all sounds very collaborative.

CS: Yes, I’d say it is a collaborative style of writing. I bring in all of the melodies and chords, but I’m up for things changing during rehearsals.

I’m also OK with people bringing in sections out of order, or even skipping sections during a performance, because I prefer to go with what is happening in the moment. Besides, we’re playing enough gigs that eventually all the material will get played so it doesn’t all have to be played every night.

MT: Changing topics, you studied with Fred Frith at Mills College. That must have been a great experience.

CS: It was, and I learned so much. I took composition lessons with him, as well as a lecture class in the theory of harmonization. It was interesting because the class was really his takes on all kinds of different music. He also directed the Mills College Contemporary Ensemble, and he’d bring in all kinds of improvised music, so I walked away with a lot of ideas about how to be a better improviser. How to really own the piece.

MT: You grew up in Sacramento with a lot of different music around but somehow you gravitated towards jazz. What initially got you into jazz?

CS: That didn’t happen until I was sixteen or seventeen. I don’t think I came to it late, but I never did the school band thing either.

But what got me into it is that I had a drum teacher who turned me on to specific musicians. He’d play a recording and say, ‘This is Tony Williams. He played drums with Miles Davis.’ And then I’d think, ‘Yeah. Miles Davis.’ So I started making connections.

It might also be that I saw jazz as subversive music. I didn’t think of it like that at first because I thought jazz was what you play in school band. Then I found out that there was a lot of jazz that people didn’t like, so I thought maybe there’s something there.

Also, the rock musicians around town were into John Coltrane and Pharoah Sanders, so I thought that’s what you listen to if you’re an underground musician. Then when I went to school I met people outside of the music school who were really into jazz and actually trying to learn to play bebop, and by then I was pretty well hooked.