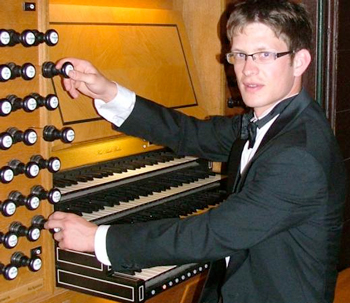 Vespers is the only service of the medieval church outside of Mass to have survived and prospered from the Protestant Reformation. Some elaborate musical settings of this early evening rite have come from the Roman Catholic pens of Claudio Monteverdi and Wolfgang Amadè Mozart, but the tradition has really gone on to thrive in Lutheran and Anglican circles, where musical Vespers services and Choral Evensongs have inspired countless settings of the psalms and canticles (especially the Magnificat) which form the backbone of the service.

On Sunday afternoon October 4, the (Presbyterian) Church of the Covenant held the latest in a series of Baroque Vespers following a model that would have been familiar to Dietrich Buxtehude in Lübeck, Johann Sebastian Bach in Leipzig, and the famous 18th century organists of Hamburg. The order of service included hymns, prayers, a setting of the Magnificat performed in alternation between a solo voice and organ, and a cantata by J.S. Bach featuring the Case Concert Choir and an orchestra under the direction of Matthew L. Garrett. Bailint Karosi, the brilliant organist of Boston’s First Lutheran Church, played the service music from the North German-style Newberry Organ in the gallery, and was featured in a recital following the service.

Vespers services like this can be attractive to both the churched and the un-churched. There’s enough religious content to allow the former to feel they’ve participated in a spiritual exercise, but the latter can take in the music without feeling they’re being forced into an uncomfortable ritual. Most importantly, unlike 18th century Lutheran Vespers services, there’s no sermon: whatever message is to be proclaimed is embedded in the music.

On Sunday, that message was summarized in the German hymn, Es ist das Heil uns kommen her (Now salvation is come to us), first introduced by Karosi as an organ prelude in a setting by Matthias Weckmann, then in Bach’s Cantata BWV 9 (an unannounced organ setting of the chorale followed the cantata). The Case Concert Choir, who began seated at the rear of the nave, processed up the side aisles to join the orchestra, and sang the opening, chorale-based chorus and the final chorale with fine blend and precision.

For Bailint Karosi, improvisation is second nature, and he demonstrated his acumen on Sunday through effortless embellishments of hymn accompaniments and elaborations of the service music, including the unattributed organ verses to the Magnificat (perhaps his own?) that alternated with Jonathan Moyer’s solo vocal lines. 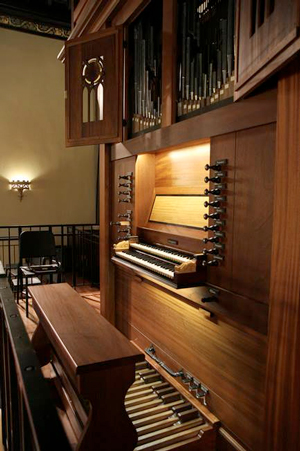 Karosi is also an impressive recitalist, as he showed in a selection of music by Jan Pieterszoon Sweelinck, Peter Planyavski, Franz Tunder and Dietrich Buxtehude following Vespers. In Boston, he plays an organ by the same builder (Richards, Fowkes & Co.), and knows the capabilities of such an instrument intimately. Unlike the Covenant’s chancel organ, which lives in chambers, the gallery organ is bright, assertive, and sometimes very much in your face. Karosi used its colorful resources to fine advantage, saving its penetrating full organ effects for big moments. A highlight, and a complete contrast to the 17th and 18th century repertoire, was Planyavsky’s recent Partita sopra cantio oenipontana, a set of variations in which the Viennese organist reveals his most attractive bad-boy tendencies through startling dissonances and cheeky parody.

Unfortunately, choir, orchestra, and most of the congregation took the Dismissal before the organ recital literally and headed for the doors. The handful of listeners who remained at the end of two hours were loud in their enthusiasm for Bailint Karosi’s playing.

here for a printable copy of this article

END_OF_DOCUMENT_TOKEN_TO_BE_REPLACED

Rodgers & Hammerstein’s Cinderella was originally produced for television in 1957 — seven years after the animated Disney film was released — and starred Julie Andrews. According to the Rodgers & Hammerstein website, it was viewed by over 100 million people. END_OF_DOCUMENT_TOKEN_TO_BE_REPLACED

The story line has its origin in an 1855 play and an 1842 farce that Thornton Wilder mined for his 1938 play The Merchant of Yonkers. When that turned out to be a flop, in 1954 Wilder made the crucial decision to re-center the show around the character of the legendary marriage broker Dolly Gallagher Levi and renamed it The Matchmaker. END_OF_DOCUMENT_TOKEN_TO_BE_REPLACED

The Dodero Center for the Performing Arts at the Gilmore Academy in Gates Mills is one feature of an impressive campus. The auditorium is shallow, the stage is deep, and the ensemble played without a shell. Throughout the program, the sound, especially in instruments’ lower registers, tended to disappear. END_OF_DOCUMENT_TOKEN_TO_BE_REPLACED