I sat down with CIM Opera Head Dean Southern, stage director Ellen Hargis, and choreographer Julie Andrijeski (both from the CWRU Historical Performance faculty) last week just before the Sitzprobe for Rameau’s 1733 opera. I began by asking how this Baroque opera project came about.

Dean Southern: Two years ago Case did Handel’s Acis & Galatea. Mary Schiller and I attended a rehearsal in Harkness, and were utterly entranced with what we heard and saw — the glorious music, the Baroque orchestra, Julie’s staging and dance choreography. We saw what kind of opportunities this opened up for the students professionally. There’s a viable, exciting scene for this kind of music that they’re not exposed to in most traditional opera circles. We thought that this year would be a great time to try something new. And it’s the 50th anniversary of the joint music program, so Mary and I met with both parties and explored the possibilities.

Hathaway: How long have both of you — Julie and Ellen — worked at Case?

Andrijeski: I’ve been in Cleveland twice, first as a student in 1986, then I finally finished my degree in 2006, and came back to serve on the faculty in 2007.

Ellen Hargis: I’ve spent close to twenty years as a visiting instructor of voice in the Historical Performance department. That’s a lot of visiting and a lot of miles!

Hathaway: Who decided on the Rameau?

Southern: Mary Schiller. She has often taught “Rossignols amoureux,” which comes at the very end of the opera, and she had very fond memories of seeing the Rameau when she was living in Europe. It’s a big piece.

Hargis: It’s still five acts, but it is a smaller version of the piece than the very largest one that was ever mounted. Rameau performed it about five times over two decades. It was a very popular opera, and he revised it over and over again to suit different forces. The 1757 version that we’re doing has no prologue, which would add another 30 to 40 minutes, and Rameau himself condensed the internal dialogue quite a lot. That allowed us to do something that is fairly complete. Very often you have to cut Baroque opera or it becomes Wagnerian in scope. This was originally for an audience that got to take frequent breaks and wine and dine. It still has the wonderful divertissements, the dance, the fantasy, and the crazy costumes to balance out the tragedy. It’s a good, full experience.

Southern: From an educational point of view, there are many roles that students at lots of different levels can sing.

Hargis: It also makes very good use of the orchestra, which for Rameau is a full and colorful entity.

Andrijeski: It really is, and it involves both the CIM and the Case students. I love working with the mix. My dancers are also from both CWRU and CIM. Several of them, like Dr. Southern over there [who will be dancing in the production], started from scratch in January.

Hathaway: What are some of the challenges of the collaboration?

ALL (in unison, laughing): Scheduling!

Hargis: In terms of physical style on the stage, we’re trying to come as close as we can to a period production. That means we aren’t riding in on motorcycles or flying in on helicopters. It’s not about props or furniture or lighting effects: the drama is brought out by the actors. To do that, the students had to learn all this French and really understand their characters and the kind of poetry they were singing — how to declaim it well, and move their bodies in a way that helps to illuminate the language.

It’s very stylized, but it’s become really beautiful, especially as the singers are exposed to the dancers, who do an even more elevated form of the same kind of movement. They look at them and say, ‘Ah! That’s why my hands need to look like this. That’s why I need to move in a curved arc.’ By next week, it’ll be gorgeous. 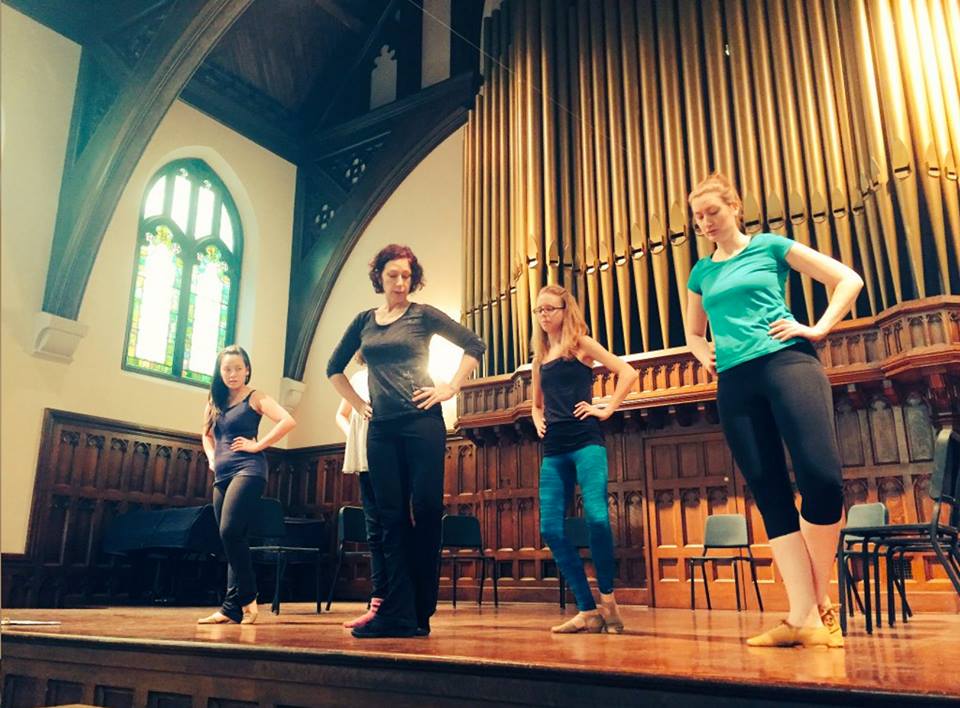 Andrijeski working with sailors in an earlier Baroque opera.

Hathaway: How about the orchestral style?

Andrijeski: It’s very much related to the speech. Ellen talked about acting, and in this style, the orchestra really needs to act, to speak, to orate, rather than just play beautiful melodies. Although there’s lovely music in there, it’s really about illuminating the text and bringing that from the pit to the stage. Harry Davidson is really enthusiastic. He’s said over and over again how much he’s enjoying learning about this style, and I think that’s part of the joy of collaboration — we’re learning from each other.

Hathaway: I hope that Harry won’t be beating on the floor with a staff.

Andrijeski: That would have been very historical, though. (Laughter.)

Southern: The stage design is really evocative of a Baroque theater. When we started this project, both Ellen and Julie did workshops with our students here as part of our opera workshop program, to give a head start. Then last month, Georgia Cowart came in and gave a lecture on this period. That became a much more meaningful conversation because we were already in rehearsal.

Hathaway: What is the run time?

Hargis: About two hours including an intermission.

Hathaway: If you were the marketing department, how would you sell this show to an audience?

Hargis: One of the strongest things about the opera is the amount of variety. We don’t have a royal budget, but with everybody’s creativity and skill, we’ve been able to create 5 sets for this show and about 55 costumes. It’s basically a tragedy with two love situations that are in conflict, but just when you don’t think you can take any more grief, we have a divertissement or fantasy scene where suddenly there’s singing and dancing — something that’s not always germain to the plot, but just a moment of entertainment before we go into the next lament. That makes things move along very quickly.

Andrijeski: The orchestration is just sublime. And when can you see a tree dance? That doesn’t happen every day.

Hargis: And there are two storm scenes!

Andrijeski: I have to say it’s been a joy watching Ellen work. Not every stage director knows about gesture and historical singing. She’s just a huge package of information, and that’s really made it — as Germans would say — a Gesamtkunstwerk.

Hargis: It’s the same for me to work with Julie, who has directed opera herself and has a great eye. So especially with the crowd scenes, which are often the hardest to build, we can sit in the front and try to coordinate a focal point of a couple of characters with a group of animals over here and a couple of sailors over there — to try to get them all looking graceful. I’m very lucky to have a colleague who can step in and knows how to move people around and make the thing flow. And she loves her dancers to be integrated into the cast, which I think is more rewarding. I love it because you never know who’s going to burst into song, or dance out into the middle.

Southern: From my point of view, it’s a dream team!

Hathaway: Julie, are you dancing in this production yourself?

Andrijeski: I’m not, but looking at everybody up on that stage, I’m a little jealous that I’m not up there performing. Maybe next time I’ll give myself a little cameo role.

Andrijeski: I wouldn’t classify his as cameo. He’s got lots to do!

Hargis: Wait ‘til you see him dancing in Hades.

Andrijeski: Wait — we forgot to tell you about the furies!

Hargis: In Baroque opera, there’s always a scene in the Underworld, and you get there through a cave on the other side of the River Styx that looks like a gigantic maw in red and orange.

Andrijeski: And the furies are capering everywhere, doing crazy things.

Andrijeski: Rameau uses low voices and instruments in hell, and two viola parts that make the orchestration so rich.

Southern: And a wind machine, and thunder.

Hathaway: But no Dei ex machina?

ALL (in unison, evasively): Well…

Hargis: We can’t fly something in from the top and we can’t come in from underneath, but we’ve done our best to create other special effects with the material at hand — and I will leave it there.

END_OF_DOCUMENT_TOKEN_TO_BE_REPLACED

The Orpheus myth inspired French Baroque composers Jean-Philippe Rameau and Philippe Courbois to write expressive solo cantatas about the famous Greek musician-poet and his futile attempts — because of his own impatience — to rescue his beloved Eurydice from the grasp of Pluto in the Underworld. These are beautifully performed by the clear-voiced soprano Hannah De Priest and the velvet-throated baritone Jonathan Woody (who makes a walk-on appearance in the Rameau). END_OF_DOCUMENT_TOKEN_TO_BE_REPLACED

Now that live concerts are beginning to proliferate, it was delightful to hear Oberlin cello professor Darrett Adkins ring a change on the solo suite format with his Hypersuite No. 3 on September 28 in the Cirigliano Studio Theatre at Lorain County Community College. His program opened the new season of Signature Series performances in Elyria, and was dedicated to the memory of Eva Hornyak. END_OF_DOCUMENT_TOKEN_TO_BE_REPLACED