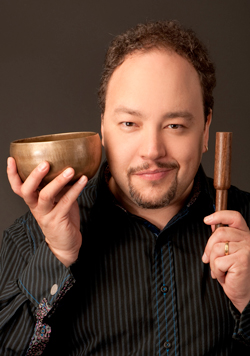 If you’ve never heard a piece of music that features coffee grinders, blenders, cast iron skillets, cheese graters, and Pyrex glass bowls, you’ll have the chance this weekend. On Sunday, April 3 at 4:00 pm in Mixon Hall at the Cleveland Institute of Music, the CIM New Music Ensemble, under the direction of Keith Fitch, will perform guest composer Robert Paterson’s Star Crossing (1999), I See You (2014-15), and Hell’s Kitchen (2014), a work during which those kitchen appliances will take center stage. The afternoon will also include Julius Eastman’s 1973 classic, Stay On It. On Saturday, April 2 beginning at 1:30 in CIM’s room 113, Robert Paterson will present a lecture about his music. Both events are free and open to the public.

“I think of this program as a great one for spring,” Keith Fitch said during a recent telephone interview. “It ends with this very infectious Julius Eastman piece that’s based on early minimalism and pop. And Robert Paterson’s music, particularly Hell’s Kitchen, is really fun. He’s driving in from New York and bringing everything you need for the piece.”

In addition to being a celebrated composer, Robert Paterson began his career as a percussionist, which is how he and Fitch first crossed paths. “He’s a fantastic marimbist,” Fitch said. “I first met him in the mid-‘90s when he was playing percussion on a recording that included a piece by my teacher. My teacher was away so I stepped in to help produce it and lend a set of ears.”

Later both Paterson and Fitch found themselves in New York City, where Paterson and his wife Victoria founded the American Modern Ensemble in 2005. “I remember going to many of their opening concerts, which were always great,” said Fitch. “The audience would all be standing crunched together in the little gallery. As the group took off they moved to larger and larger spaces. I’ve been wanting to bring Rob in for a while, so it just worked out perfectly.”

Julius Eastman’s story is one of fame ending in tragedy. Growing up in Ithaca, New York, his talents as a pianist were quickly recognized. He attended the Curtis Institute of Music, where he studied piano with Mieczyslaw Horszowski and composition with Constant Vauclain. Additionally Eastman was a talented vocalist. He caught the attention of composer Peter Maxwell Davies, who hired him to perform the role of King George III in the classic 1973 Nonesuch recording of Eight Songs for a Mad King.

Eastman would later become a member of Lucas Foss’s Creative Associates at SUNY-Buffalo’s Center for the Creative and Performing Arts. Eastman also served as the first male vocalist in Meredith Monk’s ensemble.

Sadly, Eastman’s life would later unravel due to depression and substance abuse. After being evicted from his New York City apartment — which resulted in many of his scores being impounded and lost — he eventually returned to Buffalo, where he died of cardiac arrest at the age of 49.

Fortunately, a few of his friends have dedicated themselves to rescuing what remains of his music. One work that has been recovered is the 1973 recording of Stay On It. “Because no score of the piece survives, it’s that semi-transcribed SUNY-Buffalo recording that gives people who want to perform it an idea of the skeleton of the piece,” Keith Fitch pointed out. “The piece is essentially a structured improvisation — a riff starts the piece and returns at several points, and in between those landmarks are places where the players improvise. It’s said that Eastman would tuck Donna Summer disco tunes and pop quotes of the time into his improvisations. I think this may be the first time that his music has ever been played in Cleveland. I can’t find any record of it being done here before.

“Even though the piece was played something like 70 times on tour, there’s only the recording from Buffalo that anybody knows of,” said Fitch. “It’s one of the few that Eastman did not supervise — we really don’t know if it’s an accurate representation of what he wanted, but it’s the only thing we have to go on.”

It was the legendary Nonesuch recording of Peter Maxwell Davies’ Eight Songs for a Mad King that introduced Fitch to Julius Eastman. “He had a very wide range and flexible voice, and that work became one of his signature pieces. For a while he made a career performing the role, including a performance with Boulez at Lincoln Center in 1976.”

Fitch once asked his composition students at CIM to bring in a work they wanted to introduce to the rest of the class, and one student brought in music by Julius Eastman. “I had not really heard any of Eastman’s own music before that, so I started investigating and realized what a fascinating story he has. In some ways it’s a real tragedy, and in other ways it’s incredible that his reputation and what we have of his music are being resurrected. Like a lot of artists, he was ahead of his time. He was such an outsider in the classical music world and contemporary music scene, not so much because he was gay but because he was black. But in a way he was also an insider. He was very close to Lucas Foss and worked with people like Boulez and Meredith Monk. He really bridged the ‘uptown’ and ‘downtown’ music scenes in New York. Eastman was a multi-faceted and fascinating musical figure.”

One person responsible for reigniting interest in Julius Eastman is his former colleague Mary Jane Leach. “It’s really because of her that so much of his music has been recovered,” said Fitch. “In the new book Gay Guerrilla: Julius Eastman and His Music, she talks about how she knew him in New York and how she has spent a lot of her life trying to find what remains of his work — almost a musical treasure hunt because she’d talk to someone who would send her to someone else. So a few people have put what we have of his music back together again.”

Northeast Ohio’s Les Délices has long been that rarest of beasts: a world-class organization so proud of its region (ours) and repertoire (distinct niches in pre-1800 music) that it never tries to be everything to everyone, paradoxically making a strong case for a broad, curious international following. In the December episode of its SalonEra series, the ensemble embraces its strengths and community to marvelous effect. END_OF_DOCUMENT_TOKEN_TO_BE_REPLACED

END_OF_DOCUMENT_TOKEN_TO_BE_REPLACED

Another I remember fondly is Gian Carlo Menotti’s Amahl and the Night Visitors.  Commissioned by NBC, the one act, made-for-television opera, premiered on December 24, 1951, at the network’s studios in New York’s Rockefeller Center. And now, through the wonders of technology, Cleveland Opera Theater has created a magical new production of the work which is available on demand through January 6, 2021 (Three Kings Day). END_OF_DOCUMENT_TOKEN_TO_BE_REPLACED

Jessen has now followed up with her second solo CD, Winter Chapel. Recorded on January 17, 2020 in Oberlin College’s Fairchild Chapel and available on Carrier Records, the album is a continuum in Jessen’s journey to push the musical boundaries of her instrument and herself as an improviser. END_OF_DOCUMENT_TOKEN_TO_BE_REPLACED