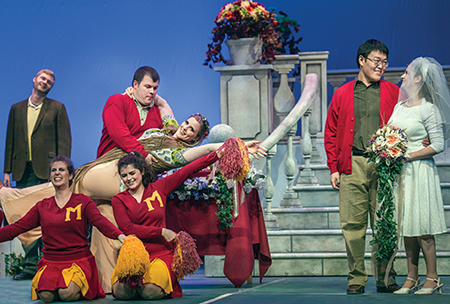 Beatrice and Benedict of Shakespeare’s Much Ado About Nothing might have been surprised enough to find themselves recast in Hector Berlioz’s operatic sequel, Béatrice et Bénédict. What would those two eventual lovers have thought about their translation to a 1960s American university during football season? Director David Bamberger’s updating of Berlioz’s 1862 work for the CIM Opera Theater on Wednesday, February 24 certainly brought a fresh perspective to an old story, even with a few cultural dissonances.

Shakespeare’s (and Berlioz’s) protagonists are warriors returning from battle; Bamberger’s are gridiron heroes at Messina University on the eve of the hippie revolution. Burgeoning social tensions are revealed during the overture when Beatrice, a campus activist who is spotted tacking up protest signs, tussles with cheerleaders who pummel her with pom poms.

Unlike Claudio the quarterback and Hero his betrothed, Beatrice the counterculturist and Benedict the football star want nothing to do with each other. That situation will suddenly and rather inexplicably change later in the show, but B&B spend most of the first act publically avoiding each other. “I’d rather be a monk in a Benedictine monastery,” he says in one punning aside.

As Claudio, the sturdy baritone Ziaoyang Zhang made an early appearance peering into what looked startlingly like a flip phone. No anachronism, it turned out to be an engagement ring case. As “his biggest fan,” Hero, soprano Halla Kalmansson was sparkly and appealing, tossing off high notes and cadenzas in her introductory aria with confident abandon.

Berlioz gives Benedict a number of end-to-end arias to negotiate, and tenor Kevin Adamik was up to the task, singing with warmth and stamina. As Beatrice, soprano Kaitlin Borden was both a strong actor and mature vocalist, singing her second-act aria while caressing a football. The other leads in this strong cast included basso Daniel Fridley as Don Pedro (the football coach), mezzo-soprano Elora Grace as Hero’s mother (and the Dean of Students), soprano Laura Salyer as Hero’s best buddy Ursula, and soprano Lauren Wickett as the Messenger. (They also sang these roles on Friday evening. A second cast took over for the Thursday and Saturday performances.) 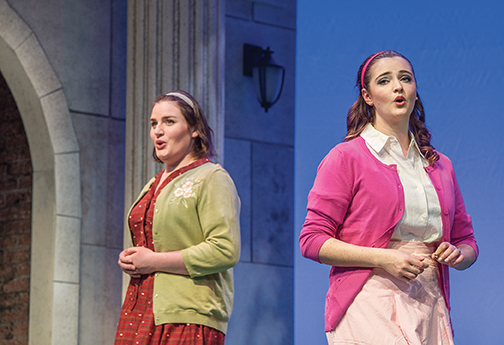 Baritone Francisco Prado portrayed Somarone (“Big Donkey”), the conductor of the Messina Conservatory, as the quintessential absent-minded professor. The rehearsal of his specially-composed wedding song for Claudio and Hero with the chorus and an intentionally incompetent onstage ensemble of oboes, bassoons, and guitar could have been hilarious, but didn’t actually inspire much laughter. Later in the show, soprano Bernadette Mondok contributed a fine performance of an ornate aria from Berlioz’s Benvenuto Cellini to the wedding festivities. Some standout vocal moments included Beatrice and Ursula’s (long!) duet, and the trio involving Benedict, Claudio, and Don Pedro.

In the second act, the chorus, who had made multiple entrances and exits down the aisles of Kulas Hall, and who later sang a wedding song from the rear of the auditorium, joined the principals for a festive brindisi, one of the slightly discordant elements in the production. On an American university campus in the 1960s, wine was unlikely to be the beverage of choice. Taking things just a bit further into the 20th century might have been more plausible — and you could diss the quality of the beer by rhyming “suds” with “Buds” just as easily as the English supertitles rhymed “brine” with “wine.”

The bright set, a university quadrangle with a classical façade and staircase, was cleanly designed and lighted by Dave Brooks and served for the entire opera, accessorized from time to time with Japanese lanterns and banners. Alison Garrigan’s period costumes were evocative of the era.

Photos by Rob Muller courtesy of the Cleveland Institute of Music.

END_OF_DOCUMENT_TOKEN_TO_BE_REPLACED

Rodgers & Hammerstein’s Cinderella was originally produced for television in 1957 — seven years after the animated Disney film was released — and starred Julie Andrews. According to the Rodgers & Hammerstein website, it was viewed by over 100 million people. END_OF_DOCUMENT_TOKEN_TO_BE_REPLACED

The story line has its origin in an 1855 play and an 1842 farce that Thornton Wilder mined for his 1938 play The Merchant of Yonkers. When that turned out to be a flop, in 1954 Wilder made the crucial decision to re-center the show around the character of the legendary marriage broker Dolly Gallagher Levi and renamed it The Matchmaker. END_OF_DOCUMENT_TOKEN_TO_BE_REPLACED

The Dodero Center for the Performing Arts at the Gilmore Academy in Gates Mills is one feature of an impressive campus. The auditorium is shallow, the stage is deep, and the ensemble played without a shell. Throughout the program, the sound, especially in instruments’ lower registers, tended to disappear. END_OF_DOCUMENT_TOKEN_TO_BE_REPLACED