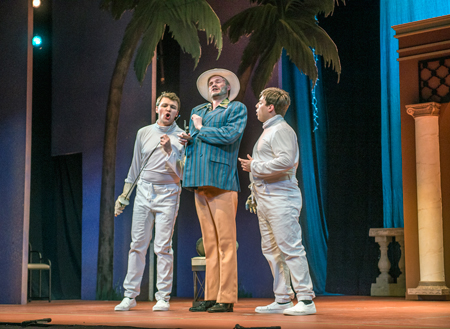 Four strong singers took the principal roles in Thursday’s cast. Renée Richardson was a compelling, golden-voiced Fiordiligi, Laura Salyer a clear, bright Dorabella, each shining brightly in their solo arias. As Ferrando and Guglielmo, tenor Carmen Michael LoPresti and baritone Matthew Brennan made a fine comic team. Though LoPresti struggled a bit in some registers, in his best moments he filled the hall with sound, and Brennan made a fine impression with his handsome tone and robust stage presence.

Decked out with a comic fake paunch, Bryant Bush made an imposing if awkward Don Alfonso. But as Mozart’s maids always do, Despina stole the show early on and never gave it back. Jennifer Robble, petite, charming, and bright of voice, was as vivacious in her servile role as she was hilarious later as the Notary. 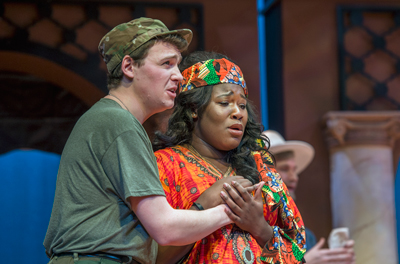 At three hours in length, Così fan tutte (“That’s What All Women Do,” subtitled “The School for Lovers”) makes for a lengthy evening, especially since Mozart gives many of the principal characters multiple reflective arias at each turn of the plot. Happily, conductor Harry Davidson kept the pace of the show on a lively trajectory, and the recitatives, stylishly accompanied by harpsichordist John Simmons, tripped off the tongues of the cast as rapidly as normal Italian speech.

From the mock-frenetic overture right through to the finale, the CIM Orchestra played nobly in the pit. Così is well-provided with ensemble numbers, and some of these — especially the sextet in the first act — count as the highlights of the show. Since this was opening night for the Thursday-Saturday cast, some coordination between pit and stage still remained to gel, but the effects were thrilling. The chorus trooped to the back of the hall for some engaging surround sound in the second act. 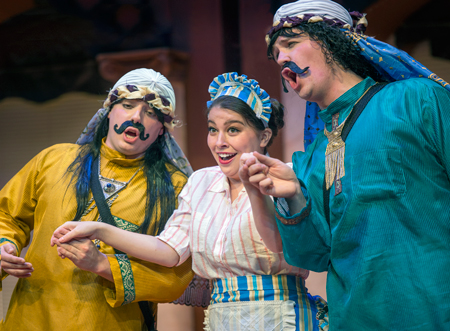 Bright, Floridian colors dominated Dave Brooks’s set and lighting, and Inda Blatch-Geib’s costumes were true to the ‘70s. If there were any out-of-period moments, the outrageous outfits and moustaches of the “Albanians” would have raised eyebrows even in Florida. And the “War” that Ferrando and Guglielmo pretended to be heading off to in a boat would have been Vietnam. Better not to ask too many questions!

Jackson began the program with a recitation of Langston Hughes’ poem “Helen Keller” — the first of five poems by Hughes that served as interludes between each piece on the first half. END_OF_DOCUMENT_TOKEN_TO_BE_REPLACED

Pianos with pins and tape on strings, a bass drum and tam tam, crotales, Almglocken, and vibes. Microphones were hooked up all around the instruments. The feed was sent to speakers around the room. Lighting designer Nicholas Houfek hung incandescent globes over the arrangement of instruments from thin black wires stretching across the beams. END_OF_DOCUMENT_TOKEN_TO_BE_REPLACED

From the podium, Elim Chan set an ambitious tone for the evening. The rising star conductor, here in her Cleveland Orchestra debut, has a commanding style, and every twist and turn in Saturday’s performance tracked closely with her baton. END_OF_DOCUMENT_TOKEN_TO_BE_REPLACED