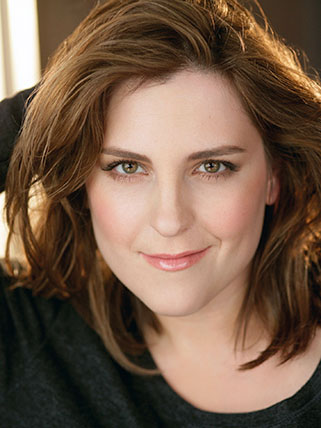 For centuries the tale of Cinderella has been told and retold around the world. This week the magical fairytale will be brought to life when CIM Opera Theater presents Jules Massenet’s charming Cendrillon on Friday, November 11 at 7:30 pm and Sunday afternoon at 3:00 pm in Kulas Hall. Cara Consilvio is the guest director and Harry Davidson conducts the Cleveland Institute of Music Orchestra. Click here to read a synopsis and to purchase tickets.

Cara Consilvio leads a multifaceted career as a director and producer of opera, theater, and film as well as dance and choreography. She has produced and directed numerous tribute videos, promotional videos, and behind the scenes mini-docs for the NEA Opera Honors, the NEA Jazz Masters videos, OPERA America, and the American Composers Orchestra.

I caught up with the director by phone and began our conversation by asking her about the opera.

Cara Consilvio: This is my first Cendrillon and it’s always exciting to direct a piece for the first time. It’s a new world that will unfold as you begin researching, but you don’t really understand how the piece works until you’re in the rehearsal room putting it up on its feet.

Mike Telin: How does the opera work?

CC: Cendrillon, like so many operas, is based on a classic story and there’s nothing more classic than this. Talk about an intellectual property that has been explored in so many different ways. But I do think there is a French sensibility to this, certainly in the music, and Massenet’s style is all about beauty and grace. I think his music is like Cendrillon is as a character — a good person despite all of the chaos and challenges that she’s had. She remains a steadfast, kind human.

Unlike some versions, in this one there is a fairy godmother and a glass slipper, so it has these classic moments that people are familiar with.

MT: How do you bring all of this to a young cast?

CC: I think everyone is excited to be back performing grand opera with a full chorus and a full orchestra. And this is such an accessible piece for the students because they grew up with the story. It’s French Cinderella.

It’s also the perfect opera to bring kids to. No one meets a death or violence at the end. In this one everyone ends up okay. And I think that after such a hard time the past few years, that’s what we need. It’s a lovely escape.

MT: Do you have a favorite musical moment?

CC: There are so many, but the duet when the Prince and Cendrillon are in the woods and they can’t see each other — it’s so urgent and just so gorgeous.

MT: Have you worked with Harry Davidson before?

MT: Is the Prince being cast as a trouser role?

CC: No! The prince is a tenor, which is shocking. There are a lot of productions where the role is sung by a mezzo. But yes, it’s a tenor and he’s great.

MT: What has been the most fun scene to stage?

CC: The ones with Madame and the step-sisters. I think in every version of Cinderella they always steal the show — they provide an opportunity for over-the-top comedy.

MT: I’d like to switch topics and ask about your path to opera.

CC: I’ve taken a circuitous route, but I feel like the through line of my career is storytelling. Whether it’s been through film, dance, theater, or opera, the approach is always similar — it’s finding the truth in the story and finding a way to move audiences.

You do need to work within the structure of the medium but ultimately storytelling is storytelling. And if I can give audiences some time to forget about everything that is going on in their lives, that is my goal.

MT: Where did this circuitous route begin?

CC: I’ve always been performing. In elementary school I was directing shows during recess. Then I became obsessed with acting, singing, and dancing. I went to UC Berkeley and studied theater and modern dance, then moved to New York to become an actor.

But what’s really random about my career is how I got into opera, because I didn’t grow up with it. I started to study singing for auditions for Broadway shows. One summer I left New York to study voice at Boston Conservatory and the teacher handed me “O mio babbino caro” from Gianni Schicchi and said, “You should sing this.” I thought he was absolutely insane but I started working on it and it was great. It had a depth and complexity that was everything that I craved.

After I moved back to New York, I kept learning arias and became so obsessed with opera that I went back to school and did a second undergrad degree in it. I was also working for Opera America as a producer making lifetime achievement videos, so I got to interview everyone — people like Marilyn Horne and Shirley Verrett. So it was through speaking to people about opera that I learned about opera.

But I realized that as a soprano who started late, singing was not a good path for me, so I started self-producing and directing. I got my first assistant gig in 2014 and have been working in opera ever since.

It’s interesting that before the pandemic, the fact that I also made films was not really a plus in opera. Then it became, “You can make films — can you make an opera film?” So it’s exciting to combine the two art forms.

END_OF_DOCUMENT_TOKEN_TO_BE_REPLACED

Supported by engagingly, yet simple staging by Cara Consilvio, a well-prepared cast of singers told the archetypal story of Cinderella with charm and flair. Framing the production was  a sparse but colorful set and wonderful lighting by Dave Brooks. END_OF_DOCUMENT_TOKEN_TO_BE_REPLACED