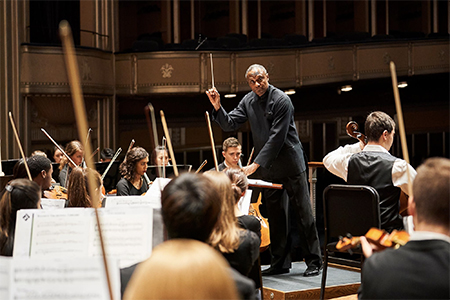 What can a concertgoer expect from a student orchestra? At most conservatories, ensemble membership varies from month to month, and a single concert can involve multiple personnel swaps. The young players face impossible schedules, limiting their time to prepare. Given all these constraints, the Cleveland Institute of Music Orchestra, playing under guest conductor Thomas Wilkins, set an astonishingly high bar in an ambitious program on Wednesday, September 26.

Wilkins cut a masterful figure onstage at Severance Hall. Music director of the Omaha Symphony and principal conductor of the Hollywood Bowl Orchestra, among other posts, he conducts primarily from the hands and arms — and otherwise keeps his movements minimal. This contributes to an overall sense of clarity and focus, and makes even the smallest additional gesture, such as a step or turn, feel like an event worth attending to. The method yields stunning results. Clevelanders should hope that he returns soon.

The program commenced with Shostakovich’s Festive Overture, which featured distinguished playing by the trumpets and violins. Alexandra McGuire delivered a controlled and pitch-perfect performance on piccolo, and concertmaster Marianne Martinoli set a precedent for strong leadership that would hold throughout the program.

Ending the movement with his first impeccable series of harmonics in a piece full of them, Kaler showed still more prowess in the lighter second movement. Surging upwards to more spotless harmonics, plucking passages with remarkable warmth and resonance, and rendering a high solo with intensity, he made it his own. Later, Kaler tackled unaccompanied passages with technical finesse, palpable expression, and musicianship to burn. After these solos, Walton’s music returns to the haunted feel of the opening. To end the piece, the cellist must fade to silence, alone, while bowing the instrument’s lowest note. Kaler executed it perfectly.

Aching passion suffused the first movement of Tchaikovsky’s Symphony No. 5. Led by principal trombone Christopher Brosius and tubist Carter Loud, the low brass stoked sonic heat and intensity. The low strings nailed the opening of the second movement, and Willem Crone showed both flexibility and dynamic control as he floated through the famous horn solo.

With Wilkins at the helm, the symphony’s loud moments crackled and sparked, and the brass sound became cataclysmic at climactic moments. Timpanist Angelo Antinori played with precision and taste in the brilliant non-sequitur of a waltz. Although the Orchestra could have followed Wilkins’s shifts in tempo more closely in the finale, the victorious conclusion was well-earned.

The music isn’t easy to play, either. Over the course of two hours, all of the musicians brought fantastic focus to the unrelenting tricky rhythms and countless layers of parts, all of which require a high level of individual responsibility. Even in the moments of calm, the accompaniment remains perpetually unsettled. Adams — who made a sprightly presence on the podium — combines minimalist, repeating motives in gradual layers, which eventually become so dense they overwhelm the senses. Lisa Wong deserves special mention for her thorough preparation of the Cleveland Orchestra Chorus, as does Jennifer Rozsa for the Children’s Chorus, which made a brief but memorable appearance in the last few minutes. END_OF_DOCUMENT_TOKEN_TO_BE_REPLACED

Warner was a fitting choice not just symbolically, but also sonically. The combination of Baroque strings, theorbo, harpsichord, and organ created a nice blend and balance, allowing the opportunity for softer instruments to stand out. In Johann Rosenmüller’s Sonata à 5 in g, Doug Balliett’s violone pizzicatos resonated beautifully, and in Johann Heinrich Schmelzer’s Sonata in d, harpsichordist Elliot Figg became an equal player in the texture with his clever improvisations. The slight exception was Joshua Stauffer on theorbo — despite the instrument’s big physical presence on stage, he received little time in the spotlight. END_OF_DOCUMENT_TOKEN_TO_BE_REPLACED