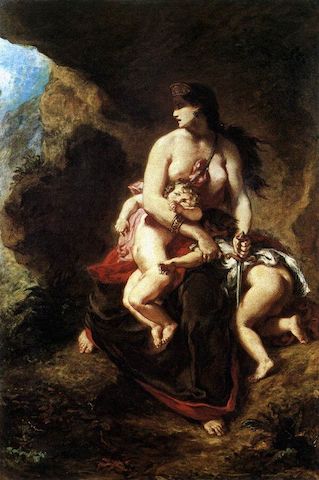 Hell hath no fury like a woman scorned, as epitomized by Euripides’ infamous character Medea. After her husband Jason rejects her for another woman in order to further his political career, she will stop at nothing to get revenge, including murdering her own children.

This sensational drama will be brought to life when the Cleveland Institute of Music’s Opera Theater presents Luigi Cherubini’s Medea on November 8, 9, 10, and 11 at 7:30 pm in Kulas Hall.

David Bamberger directs and Harry Davidson will lead the cast and CIM Orchestra. The opera will be sung in Italian with English supertitles. Running time is two hours including intermission. Tickets are available online.

While Medea commits horrible atrocities, David Bamberger cautions against judging her too harshly. “In Euripides’ play, it’s clear that our sympathies are supposed to lie with her even though she does terrible things,” the director said by telephone. Now considered to be one of the great plays of ancient Greece, it was only awarded a third prize (out of three) at the Dionysia festival in 431 BCE. “And Euripides certainly got into — I don’t know if trouble is the right word — but he was not popular in Athens because he kept writing shows that had sympathy for the underdog, which women clearly were.”

Bamberger noted that in spite of being a victim, the heroine makes some shocking pronouncements like ‘Sooner would I stand three times to face their battles, shield in hand, than bear one child.’ He also noted that Glauce, Jason’s second wife who Medea murders with a poison robe, is a nice girl. “But it is the ‘Burning Bed’ syndrome — you’re not in favor of what she does, but Jason really deserves it. The opera has that kind of complexity, and you do come to have sympathy for the person you are supposed to hate.”

Originally composed as an opéra-comique with a libretto by François-Benoît Hoffman, Medea premiered in March of 1797 at the Théâtre Feydeau in Paris, to a less than enthusiastic reception. In the 20th century the Opera was most often performed in an Italian translation with recitatives replacing the spoken dialogue.

This week’s performances will mark the first time that Medea has been produced in Northern Ohio. “At least we’ve been saying that, and no one’s been calling to tell us we forgot about this or that performance,” Bamberger said. “We do know that the Met never did it here, and nobody at CIM or Oberlin remembers performing it, so at the most conservative estimate it hasn’t been presented in a long, long, long time.”

Bamberger said he decided to produce the Opera because it is worth doing. “It’s a little-known but very good piece. Musically it’s stunning, and stylistically interesting because Cherubini straddled the Classical and Romantic periods. He was four years younger than Mozart, but by the time he died at 82, Schubert was gone, Beethoven was gone, Bellini was gone. And Beethoven, who was not inclined to flatter anybody, felt that Cherubini was the finest of his contemporaries. He was a conservative, but with this piece, he picked a story that revels in the emotionalism that the Romantic period was all about.”

When asked if mounting Medea is a political statement, Bamberger quickly answered, “No. But I think the piece raises the question of the role of women. Medea is an outsider, a foreigner who doesn’t belong with the good folk, so the parallels are there for anybody who wants to draw them. But I’m not trying to make any grand political statement. I think the piece does that on its own.”

On a historical note, Bamberger pointed out that it was the famed Greek-American soprano Maria Callas who was responsible for bringing Cherubini’s opera back to the repertoire. “She performed it a lot and one can see why. Ironically it became the story of her life.” (Her love affair with Greek shipping tycoon Aristotle Onassis ended when he left her in favor of Jacqueline Kennedy.) “Not that Callas went killing Onassis’ babies, but there is that idea of being replaced by a woman of prestige.”

Winding down our conversation, Bamberger said that Medea is an opera that people should see. “It’s really good music with a story that has lasted for three thousand years. And we do have at least one of the principals left alive at the end, which is more than you can say for Tosca.”

Based on recent events, its new designation might well be “Chamber Music Way” in honor of the fine performances that are taking place this month at Gilmour Academy in Gates Mills and The Grove Amphitheatre in Mayfield, courtesy of ENCORE Chamber Music Institute and ChamberFest Cleveland, respectively. In addition to the distinction of presenting some of the first in-person performances to come onto the calendar since the pandemic, both organizations were making their debuts in new venues. END_OF_DOCUMENT_TOKEN_TO_BE_REPLACED

On Sunday, June 6, Cleveland piano fans got an opportunity to hear Kohlberg himself in a short solo recital that formed the coda to Music From The Western Reserve’s online concert series. END_OF_DOCUMENT_TOKEN_TO_BE_REPLACED

END_OF_DOCUMENT_TOKEN_TO_BE_REPLACED

This year the majority of the concerts are being held at a single location, the magnificent Grove Amphitheatre in Mayfield. Although the venue has no permanent seating, lawn chairs and blankets are the perfect solution. Picnics are encouraged and the responsible consumption of alcohol is permitted. Think Blossom Music Center on a smaller scale and you’ll get the picture. END_OF_DOCUMENT_TOKEN_TO_BE_REPLACED

The series opener, “Legends,” celebrated the return of in-person concerts with music by Antonín Dvořák, Enrique Granados, Paul Wiancko, and Franz Schubert. The musicians displayed the wide range of expression and color, enchanting communication, and technical brilliance that chamber music can provide. END_OF_DOCUMENT_TOKEN_TO_BE_REPLACED

Music director Franz Welser-Möst set the stage in his introductory video remarks, describing the Berg era as “the ‘Roaring 20s’ aftershock of World War I, a blooming of musical styles never experienced before or since.” END_OF_DOCUMENT_TOKEN_TO_BE_REPLACED