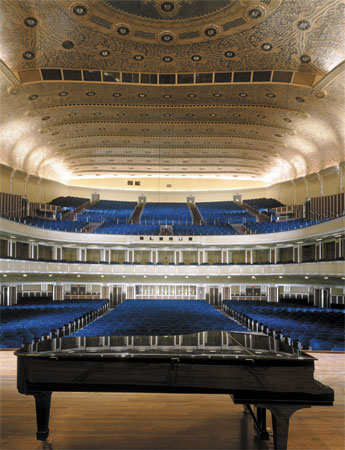 Levkovich’s low number in the original draw (was that only twelve days ago?) brought him to the stage first for ‘Rach 2’. From its dramatic beginning to its big, Hollywood tuneful finale, Dmitri Levkovich showed himself once again to be an elegant, thoughtful and technically brilliant pianist. He plays with a blissed-out expression on his face that tells you he’s completely into what he’s doing. He plays with a big sound which never loses its clarity, crunches the numbers of rhythmically complex passages to come out right on the money, and massages the music expressively within the beat, the measure and the phrase without sounding self-indulgent.

No pianist gets through this piece — or the third concerto — without being covered by the orchestra at one point or another, and so it was this evening. But exuberance is written all over this work and the piano frequently plays a more accompanimental than solo role. Levkovich successfully emerged from the opulent orchestration when the piano had something important to say, helping heat up a fine accelerando at the end of the first movement, pointing up offbeat accents, stopping the show in the second movement with his fierce solo trills, and setting up a delightful scherzo-like interlude. The last movement fugato was marvelously articulated and perfectly coordinated with the orchestra. Then, of course, the Big Tune took over and swept everything along with it to the end. For all his fine work, Levkovich got a nearly unanimous standing ovation (and another round of applause from his balcony compatriots when he sat down to hear the second half).

‘Rach 3’ is far more of a showpiece, and it became an intensely physical one under the strong fingers of Evgeny Brakhman, who really set himself to the task.

Brakhman and the orchestra tussled a bit over balances at the beginning of the first movement, which built in volume and fervor very quickly, but they played well off each other in the rhythmically complex bridge section. The pianist dramatically nailed the difficult cadenza then changed character and voiced an absolutely ravishing pianissimo return of the original tune at the end. The violas got yet another opportunity to shine in the second movement and rose to the task. Brakhman chipped a high note at the climax of a phrase and played a few splattered chords later on, but his delicate filigree during the waltz passage was clean and colorful. The transition to the finale might have used five minutes’ more rehearsal, but once the wild ride was underway, it continued unabated to the end, when Brakhman actually leapt to his feet on the release of the final chord. So did the audience, instantaneously.

Who was more true to the spirit of Rachmaninoff? Levkovich was more calculatedly elegant and conscious of shape and form (he’s a composer, by the way), while Brakhman put himself more passionately out on the line, playing with emotional abandon. Was one artist ‘better’ at this than the other? It might be easier to talk about that question had they played on the same work on the same program, as they did in the Semi-finals. In any event, the audience loved Levkovich but they adored Brakhman. What do our gentle readers think? Please comment!

But hold on — there are two more pianists waiting in the wings. On Saturday night, Martina Filjak gives us her version of Rachmaninoff’s second concerto, and William Youn wraps up the whole competition with Brahms’ first. More splendid playing to come, and, for those who might already have made up their minds, there could be some surprises in store. The audience gets to vote for its choice on Saturday via a clever, tear-off-the-corner ballot, but the winners will be picked by the Jury. The Jury is entirely made up of pianists, and they’re looking for qualities we may not even be considering.

It might seem that there’s not a lot left to discover after three decades of experience with the Red Priest’s charming and evocative score, but this performance boasted a secret weapon: the young Spanish violinist Francisco Fullana, now the Orchestra’s artist-in-residence, whose affecting personality and easy virtuosity raised the solo part a quantum leap above the merely extraordinary. END_OF_DOCUMENT_TOKEN_TO_BE_REPLACED

END_OF_DOCUMENT_TOKEN_TO_BE_REPLACED

The Cleveland Orchestra’s second performance of the new season on Sunday afternoon, October 17 at the newly renamed Mandel Hall at Severance Music Center was just such an occasion. If the ensemble’s return to public concerts under the baton of Franz Welser-Möst wasn’t enough reason to light a bonfire, the Cleveland debut of a new work written for one of the Orchestra’s most popular soloists, and the swan song of one of its longest-serving members added extra fuel to the celebration. END_OF_DOCUMENT_TOKEN_TO_BE_REPLACED