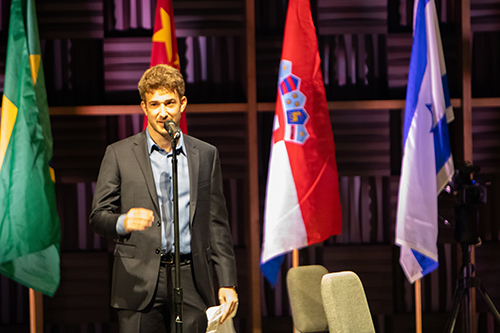 That made things interesting for the audience and jury on the one hand, and for the Escher on the other.

With different repertoire, you can find yourself comparing pommes (the very Gallic Franck) with Apfelsinen (the quintessentially Germanic Schumann). In the case of the Shostakovich, with two performances of the same work back to back, you have more direct points of comparison — but for the pianists’ collaborators there’s the added challenge of keeping two different interpretations straight. 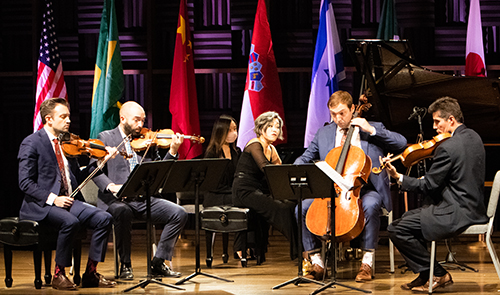 Camille Saint-Saëns was the pianist at the premiere of the Franck Quintet in 1879, and Byeol Kim proved a worthy successor on Tuesday, trading broad, dramatic phrases back and forth with the Escher Quartet and joining them in sonorous, punctuating climaxes.

Written in Franck’s signature, cyclic style, the work’s motifs come back a number of times during the three movements, which should cement its musical content in the listener’s memory, but — no reflection on its expert performance here — the work is curiously evanescent. By the end of intermission, it had disappeared like smoke.

Schumann’s Quintet found the composer at the top of his game in 1842. The work is tightly written and was brilliantly performed by Yedam Kim and the Escher on a mere two hours’ of rehearsal. The pianist told this publication in an interview that she had to memorize it for a previous competition, which showed in her total command of the solo part and her understanding of how she fit into the architecture of the piece.

The musicians took the breathtaking scherzo right out to the edge of danger without falling off the cliff. The finale, a fugue that has much in common with the last movement of Mozart’s 41st Symphony, was strong and exciting. 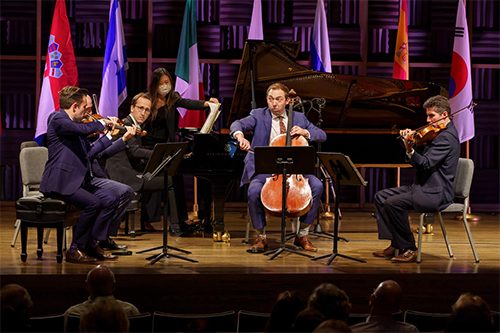 On Wednesday, the two pianists managed to craft very different performances of the Shostakovich Quintet. Lovre Marušić’s take on the work was more cerebral — as if he viewed the work from an elevation of 5,000 feet — but exquisitely clear, each note carefully placed and voiced for its context.

Martín García García plunged in head first and totally committed to his role, investing the piano part with strong emotions, even when the composer’s feelings didn’t feel completely genuine — where Shostakovich manufactured moments of happiness in a general context of bleakness and despair. 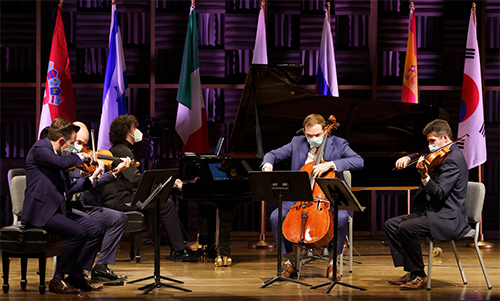 The pianist brought the Escher along with him on his eventful journey through the piece, with its creepy second-movement fugue, its don’t-blink-or-you’ll-miss-it scherzo, its odd, stripped-down intermezzo, and its unconvincingly sunny finale.

In an unusual move, García García played from a small laptop rather than a digital tablet, enlisting the aid of an assistant who poked at a key to change pages on the display.

All four pianists demonstrated strong collaborative skills which bode well for their performances on Friday and Saturday with an orchestra celebrated for playing like a big chamber ensemble. Bring the concertos on!

Supported by engagingly, yet simple staging by Cara Consilvio, a well-prepared cast of singers told the archetypal story of Cinderella with charm and flair. Framing the production was  a sparse but colorful set and wonderful lighting by Dave Brooks. END_OF_DOCUMENT_TOKEN_TO_BE_REPLACED

END_OF_DOCUMENT_TOKEN_TO_BE_REPLACED

The music isn’t easy to play, either. Over the course of two hours, all of the musicians brought fantastic focus to the unrelenting tricky rhythms and countless layers of parts, all of which require a high level of individual responsibility. Even in the moments of calm, the accompaniment remains perpetually unsettled. Adams — who made a sprightly presence on the podium — combines minimalist, repeating motives in gradual layers, which eventually become so dense they overwhelm the senses. Lisa Wong deserves special mention for her thorough preparation of the Cleveland Orchestra Chorus, as does Jennifer Rozsa for the Children’s Chorus, which made a brief but memorable appearance in the last few minutes. END_OF_DOCUMENT_TOKEN_TO_BE_REPLACED