“I have always been fascinated by the Sarajevo Haggadah, with its story and amazing history,” Bosnian-born accordionist and composer Merima Ključo told ClevelandClassical.com in a 2015 interview. “After reading Geraldine Brooks’s People of the Book, I became obsessed with the idea of a project that would musically and visually follow the Haggadah’s journey from Spain to Sarajevo.”

Dating from 14th-century Spain, the Jewish prayer book that became known as the Sarajevo Haggadah went through many hands before ending up in Bosnia, having been rescued from destruction by such unlikely figures as a Jesuit priest in Venice and a Muslim imam in Sarajevo — who hid it from the Nazis in the library of his mosque during World War II after it was smuggled out of the Bosnian National Museum by its chief librarian.

That project was presented at the Cleveland Museum of Art in its original scoring for accordion and piano in November of 2015. This week Merima Ključo will return to Cleveland for six free performances of her orchestrated version of the work with Avner Dorman and CityMusic Cleveland as part of the orchestra’s “Two Faiths: One Spirit” project. Performances run from March 14-18 in Beachwood, Cleveland, Parma, Lakewood, and Elyria (see our Concert Listings for times and locations).

“This project is so exciting,” Ključo said via Skype from Mostar, Bosnia- Herzegovina. “I spoke to Eugenia Strauss in June of 2016 when I was here for ChamberFest. She came up with the idea, and now here we are.”

How did she go about turning a work for two players into a piece for accordion and chamber orchestra? “I wanted the accordion part to stay mostly the way it was in the original score. I did my best to arrange the piano part for orchestra. Every instrument has its own character in the journey of the Sarajevo Haggadah. Although the original is 50 minutes and this version is 30, the essence of the piece is there.” 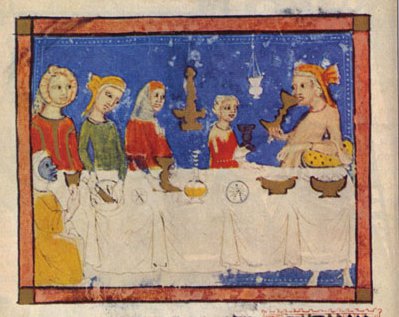 Ključo explained that the piece is still divided into a dozen movements that follow the Haggadah’s journey from Spain to Bosnia. Those movements include “La Convivencia,” the four-century period when Jews, Muslims, and Christians lived in peace under Moorish rule in Medieval Spain; “Al Mora,” based on the book’s illustration showing a Moorish woman at a Seder table (above); and “Alhambra Decree,” the order that expelled Jews in 1492 under pain of death. Other movements follow the book’s journey to Italy, its preservation by a priest during the Inquisition, and its survival of both the Nazi regime and the 1992 Siege of Sarajevo.

Ključo has orchestrated the piece for pairs of flutes, oboes, clarinets, bassoons, horns, trumpets, and trombones, a single tuba, timpani, and strings. “It was exciting to figure out which instruments could best describe that horrible moment in history where people were forced to change their religion or leave. So instead of having the pianist hit the strings of the instrument like in the original version, I was able to create powerful drama with timpani and winds.

“In the opening movement — the creation of the world, which is from the Haggadah — I begin with oboes, and then introduce other instruments. During ‘La Convivencia,’ all the instruments are used and there is a lot of unison because the whole movement is about coexistence. It describes that moment in history where people lived together and enjoyed each other. I kept ‘Al Mora,’ the Moorish girl, as a movement for solo accordion.” 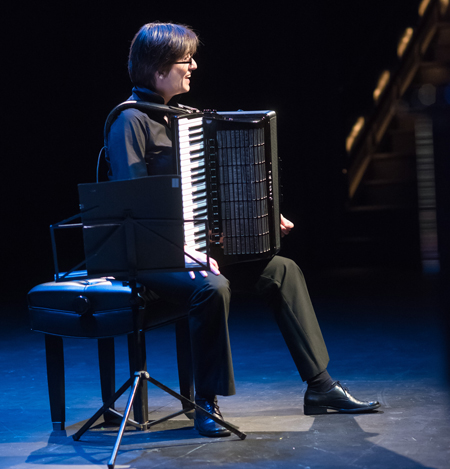 Unlike the original, the new version does not include video. “Even with the small changes in the score, the entire video would have needed to be redone because it was made for the lengths of the original movements. But I had approached the visuals as an accompaniment to the music, not the other way around.”

The composer/accordionist said that she has enjoyed having the opportunity to work with composer/conductor Avner Dorman. “When I sent him the first part of the score he gave some wonderful feedback. Avner is a composer and knows the orchestra really well, so I felt totally supported. It was great to have someone who can say, Hey, this doesn’t work.”

Ključo said the most difficult part of the project was figuring out how to begin the process of reworking the original score. “But the moment I started I could not stop. I could go hours and hours into the morning. When you’re hearing the instruments in your head, it is a powerful experience.”

Jackson began the program with a recitation of Langston Hughes’ poem “Helen Keller” — the first of five poems by Hughes that served as interludes between each piece on the first half. END_OF_DOCUMENT_TOKEN_TO_BE_REPLACED

Pianos with pins and tape on strings, a bass drum and tam tam, crotales, Almglocken, and vibes. Microphones were hooked up all around the instruments. The feed was sent to speakers around the room. Lighting designer Nicholas Houfek hung incandescent globes over the arrangement of instruments from thin black wires stretching across the beams. END_OF_DOCUMENT_TOKEN_TO_BE_REPLACED

From the podium, Elim Chan set an ambitious tone for the evening. The rising star conductor, here in her Cleveland Orchestra debut, has a commanding style, and every twist and turn in Saturday’s performance tracked closely with her baton. END_OF_DOCUMENT_TOKEN_TO_BE_REPLACED