In her composer’s note for YellowBarn, where the project was developed, Ključo said “I am fascinated by the Sarajevo Haggadah not only because of its amazing and fascinating history, but also because it reminds me of my own life and the ‘Exodus’ I had to experience. “I was forced to leave my own country, under the strangest and heaviest circumstances. During its journey, the Haggadah suffered transformations which make it even more special by giving it a richer history that reflects its passage through different cultures.”

The performance will feature Merima Ključo on the accordion and guest pianist Seth Knopp. Video for the presentation is the creation of Bart Woodstrup. Pulitzer Prize-winning author Geraldine Brooks, who wrote about the Haggadah in her historical novel People of the Book, will introduce the program.

Because of her busy touring schedule, Merima Ključo was not available for a telephone interview, but she graciously agreed to answer questions by e-mail.

Mike Telin: The story of The Sarajevo Haggadah is fascinating: I understand that you were familiar with the story, but had you envisioned creating a piece based on it prior to reading Geraldine Brook’s historical novel?

Merima Ključo: I have always been fascinated by the Sarajevo Haggadah, with its story and amazing history. After reading Geraldine Brooks’s People of the Book I got inspired by this amazing book and became obsessed with the idea of the project that would musically and visually follow the Haggadah’s journey from Spain to Sarajevo. (Just to make sure that there is no confusion, my “Sarajevo Haggadah: Music of the Book” is not based on People of the Book but is inspired by it.

MT: How much correspondence did you have with the author prior to or during the creation of the project?

MK: Geraldine Brooks was invited to introduce the Sarajevo Haggadah and my composition at the premiere of my piece at the Jewish Music Festival in Boston. That was the first time we met. We both were inspired by this amazing Haggadah — she wrote a book about it, and I wrote the musical composition. We felt connected immediately even though we never met before. I couldn’t imagine making a better connection.

MT: How much historical musical research did you do?

MK: It is a wonderful, never-ending search that could take a lifetime. My love for Jewish music dates from my days as a 14-year old student in Sarajevo. One day I was walking through the streets when, passing by the music shop, I heard a beautiful melody. The sound was somehow very familiar to me, but still different from anything I had heard before. I couldn’t resist going into the shop to ask what it was ‘Sephardic music’, they told me. 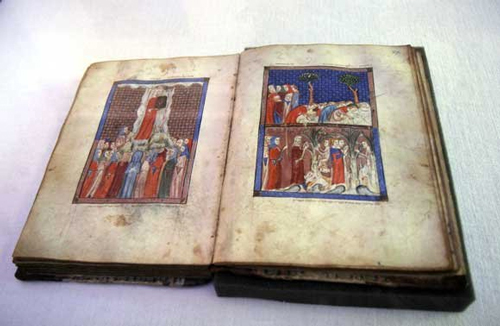 I was, and still am, mesmerized by this music of the Sephardic Jews. It has its roots in the musical tradition of the Jewish communities in medieval Spain and was brought to the Balkans, among other places, after the expulsion of the Jews from Spain in 1492.

Sephardic Jews observed the traditions of their home countries, and infused Jewish culture into the music of their adopted lands. This resulted in musical similarities. For example, Bosnians and Sephardic Jews use the same scales and rhythms. They share the same emotion in their songs, the same pleasures, and the same pain. In the end they share the same country, the same customs, and the same food. They learn from each other. And an interesting note: many Sephardic songs from Bosnia are about celebrating Passover.

A few years later, I was fascinated in a similar way when I heard Klezmer, another Jewish musical tradition, but this time of the Ashkenazic Jews of Eastern Europe.

Both Klezmer and Sephardic music, in their style, lyrics, and depth and humour, have many similarities with the Bosnian traditional Sevdah. This made it easier for me to get close to this music and I started to love and play it with the same passion as I do Bosnian and other musical styles from the Balkans.

In 2003 I had the luck of meeting Shura Lipovsky, one of the finest European interpreters of Yiddish song. Soon after that we started to collaborate and share our knowledge. Through Shura I met Theodore Bikel and Tamara Brooks, and they all became my musical family and my biggest teachers of this wonderful culture. Thanks to them I started to understand and to love this music even more.

Another person who has been very important in my Jewish musical education is Flory Jagoda, a Bosnian Sephardic singer and composer, thanks to whom many wonderful Sephardic melodies and songs still exist today.

MT: What led you to choose Seth Knopp and Bart Woodstrup as your collaborators?

MK: As I said earlier, I became obsessed with the idea that the project would musically and visually follow the Haggadah’s journey from Spain to Sarajevo. But the realization of this specific project didn’t happen until I was invited to develop it at a residency at YellowBarn. Seth Knopp is the artistic director of the Yellow Barn and he was the first one who recognized the artistic value of this project and invited me to YellowBarn to realize it. I couldn’t imagine a better place to realize my project.

Seth showed me Bart’s work and I immediately knew that he was the right artist for my project. And having Seth as a pianist in the project enriched the whole idea. They were the best artistic team I could imagine. Composing for accordion and piano felt absolutely natural to me once Seth became involved.

MT: This project was not your first residency at YellowBarn: what is it about the place that inspires you?

Next to the executive director, Seth Knopp, Catherine Stephan is the artistic and executive brain of the YellowBarn. They should be cloned!

MT: Why did you decide to take up the accordion at age twelve?

I love all those keys and little buttons, and the bellows that breathes in and out, like an amazing, wonderful monster that moves together with your body. I started as a child, studied accordion for years, went to different conservatories and music academies, and still after all these years I am amazed with the sound and all possibilities that this instrument has. I still experience it with the same passion I had had when I was a child.

To learn more about the Sarajevo Haggadah, we invite you to visit the following links:

On the first day of Passover, host Marco Werner sat down with Merima Ključo at WGBH’s studio in Boston to talk and hear more about Merima’s personal story and the musical story behind her new work: View this segment on “The World”‘s website.

“The Love of Books”, a BBC documentary on the saving of a library’s collection during the siege of Sarajevo.

“The Ultimate Survivor”, a brief video describing the history of the Sarajevo Haggadah.

END_OF_DOCUMENT_TOKEN_TO_BE_REPLACED

Rodgers & Hammerstein’s Cinderella was originally produced for television in 1957 — seven years after the animated Disney film was released — and starred Julie Andrews. According to the Rodgers & Hammerstein website, it was viewed by over 100 million people. END_OF_DOCUMENT_TOKEN_TO_BE_REPLACED

The story line has its origin in an 1855 play and an 1842 farce that Thornton Wilder mined for his 1938 play The Merchant of Yonkers. When that turned out to be a flop, in 1954 Wilder made the crucial decision to re-center the show around the character of the legendary marriage broker Dolly Gallagher Levi and renamed it The Matchmaker. END_OF_DOCUMENT_TOKEN_TO_BE_REPLACED

The Dodero Center for the Performing Arts at the Gilmore Academy in Gates Mills is one feature of an impressive campus. The auditorium is shallow, the stage is deep, and the ensemble played without a shell. Throughout the program, the sound, especially in instruments’ lower registers, tended to disappear. END_OF_DOCUMENT_TOKEN_TO_BE_REPLACED