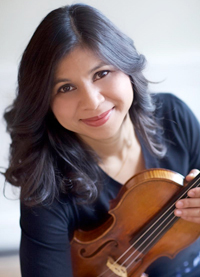 During a recent telephone conversation I confessed to Adele Anthony that Nielsen’s Violin Concerto is a work with which I am not extremely familiar. “I hear that a lot,” she responded with a laugh. “And it’s too bad because I think it’s a beautiful work that people will appreciate. It has a very gripping opening. I found it to be very attractive from the first time I heard it.”

Anthony’s first exposure to the piece was through her violinist father. “As a student in Germany, he studied with the great Hungarian violinist Tibor Varga, who’s recording of the concerto we had at home. My father told me that it is a fantastic piece and that I should learn it. I listened to it and thought it was great, and when I was older I did learn it, later entering the competition with it. And because of that win, I have been able to perform it a lot more than perhaps I would have otherwise.”

The concerto is written in a melodic neo-classical style. “It’s definitely a romantic concerto, but it’s a little unusual in the way that it’s formatted. It’s written in two movements, but there are actually three. The first, Praeludium, has a long introduction with an exposition. The second is really like a slow movement and a third-movement scherzo all in one. But within that there is a classical form. It also has the musical language unique to Nielsen that you also hear in his concertos for flute and clarinet. I think his music is distinctive. You recognize it as Nielsen as soon as you hear it.”

Anthony also finds the concerto to be uniquely Danish. “His melodies are very pastoral, and the countryside where he was born, near Odense on the island of Funen, is very beautiful. Interestingly, Hans Christian Andersen was born there as well, so you do think about that fairy-tale, idyllic life. And, the Danes know how to enjoy life, especially in the summer. I think you hear this in the music.”

At age 13, the Australian-born Adele Anthony became the youngest winner of the ABC Instrumental and Vocal Competition performing the Sibelius Concerto with the Queensland Symphony Orchestra. Is there something about the Nordic composers? “I don’t know,” she said, laughing, “but it is a great part of the world to visit.”

From an early age, Anthony was fascinated with the violin. She recalled following her father around the house when he practiced, imitating him with a brush and comb. “At the time we lived in Tasmania, the southern island state of Australia. My father mentioned my interest to a friend who, as it turned out, was starting the very first Suzuki program in Tasmania. He told my father that I was welcome to come, and if I was interested I could stay. I was two and half years old and my parents thought I was too young, but they took me to the class and I enjoyed it. I think Suzuki is a wonderful way for young children to start playing. I remember going to my group classes, and it was kind of a social event. I had a 15-minute lesson and then played with the group. It was fun and I have very good memories of it.”

When it came time to enter conservatory, Anthony made the decision to attend the Juilliard School. “Going to New York was a little unusual. Most of the musicians that travel outside of Australia tend to gravitate towards London or Germany because there are a lot of Australians living there. When I arrived at Juilliard I didn’t know anybody, but I wanted to be there to study with Dorothy Delay. But it was also wonderful to meet hundreds of violinists there from all over the world who were doing the same things as I was.”

Today Anthony makes her home in New York City along with her husband violinist Gil Shaham and their three children. “The children are pretty much the focus of our lives. And I have to say that having them has made me enjoy playing the violin even more than before. It now feels like a gift to be able to do it. We love spending time with our kids, and we are fortunate as musicians because we do get to see them quite a lot.”

How does she juggle a career and family? “During the year my husband and I stagger our work, so one of us is always home. We’re fortunate to have the same manager at Opus3, and she makes sure that everything will work for us. The summer is the only time that we perform together, so we bring everybody with us. This summer is exciting because we will be going to Australia to play with the Sydney Symphony, and we’ll visit some relatives of course, then go to Colorado for Aspen after that.”

This week, Anthony is excited about working with conductor Joaquin Valdepeñas. “We are chamber music colleagues at Aspen. He’s a wonderful clarinetist, and I am looking forward to having this new relationship with him as a conductor.”

The first such video, capturing the October 20 performance of Resilience at First Baptist Church in Shaker Heights, delivered handsomely on that promise. Erica Brenner’s sensitive videography and audio mixing preserved brilliant performances of music that illuminated two troubled periods in history: the plague of London in 1665, and the outbreaks of cholera and dysentery that dampened but failed to defeat the human spirit at the end of the American Civil War two centuries later. END_OF_DOCUMENT_TOKEN_TO_BE_REPLACED

The Diamond Brass Quintet opened Rocky River Chamber Music Society’s new season on Monday, October 12 with nobody in the pews at West Shore Unitarian Universalist Church. Like most performances these days, the concert was only attendable online. The players were widely-spaced on the stage, plexiglass shields were in place to cut down on aerosol transmissions, and the quintet took two intervals to go outdoors and let the air in the sanctuary refresh itself. (Rehearsals had been held outside as well.) END_OF_DOCUMENT_TOKEN_TO_BE_REPLACED

“Bewitched,” the first subscription concert of this season by Les Délices, can be summed up in one word: sensational. In her introductory remarks, director Debra Nagy talked about the “Embracing Change” theme of the season and completely rethinking the concert experience for streaming. The detailed planning was in evidence throughout the program. “Bewitched” was not just a concert; it was a carefully planned musical film, with elements of drama and music appreciation, all in support of the inspired program choices featuring Medea and Circe, two famous witches (or sorceresses, if you prefer) of classical antiquity. END_OF_DOCUMENT_TOKEN_TO_BE_REPLACED

END_OF_DOCUMENT_TOKEN_TO_BE_REPLACED

Though it had amassed a vast trove of audio over the decades, The Cleveland Orchestra has come late to the game in the video department. Even so, the organization wasn’t about to rush to produce the equivalent of home movies to keep its patrons engaged while live events were on hold. END_OF_DOCUMENT_TOKEN_TO_BE_REPLACED

END_OF_DOCUMENT_TOKEN_TO_BE_REPLACED

Although it wasn’t the original plan to go online last weekend for the final round of the James Stroud Classical Guitar Competition, moving to a digital format suited the event well. Young performers Aytahn Benavi, Patricia Hernandez, Ian Tubbs, and Eric Wang played in the intimate setting of their own homes, giving everyone who tuned in a front row seat. END_OF_DOCUMENT_TOKEN_TO_BE_REPLACED