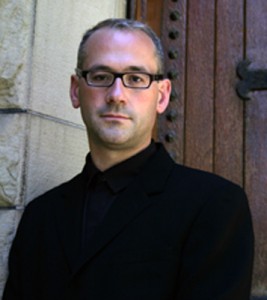 “I’m very excited to be conducting CityMusic’s Holiday Concerts this year,” Peter Bennett said during a telephone conversation. “And I am particularly pleased to be able to work with the La Sagrada Familia Choir to bring Ariel Ramírez’s Misa Criolla to Cleveland audiences for the first time.” On Wednesday, December 3 at 7:30 at La Sagrada Familia Church, CityMusic will present the first of five free performances featuring Ramírez’s Misa Criolla. (See our concert listings for times and locations.) The concert also includes Antonio Sarrier’s Overture in D, and Mozart’s Bassoon Concerto with CityMusic principal bassoon Laura Koepke as soloist.

“Misa Crioll presents a different kind of challenge for me,” Bennett said. “It’s not the kind of repertoire that I’ve done before, but when Eugenia Strauss asked me to conduct it, it seemed like an amazing thing to do. It’s a great piece, and the fact that we’re involving a Latino church choir is a great way to present it to the community.”

Based on Argentine folk melodies and rhythms, Misa Criolla utilizes an array of folk instruments such as panpipes, and many types of drums and percussion, as well as the charango, a small high-pitched guitar. “Ramírez chose as his text the words of the Roman Catholic Mass newly translated into Spanish as a result of the Second Vatican Council,” Bennett pointed out. “And he adapted the musical forms and rhythms of his native country.”

One of the “adventures” Bennett encountered while preparing the piece was figuring out how to teach it to the La Sagrada Familia Choir. “Many don’t read music, so we just had to take a different approach, but they have worked really hard and it’s coming together very nicely.” The chorus will also include some students from Cleveland State and Case Western Reserve Universities as well as members of the Trinity Cathedral Choir. The soloists, tenor Joshua Blue and baritone Michael Floriano, are both students at the Oberlin Conservatory.

Another adventure for Bennett was figuring out exactly which instruments CityMusic was going to use and who was going to play them. “We have two guest musicians coming in from Wisconsin for the performances. Francisco Lopez will be playing the charango and bomba, (percussion instruments) which are essential to the piece. Raquel Pariaso will play the siku, an Andean pan-pipe, and percussion. Some performances use piano or harpsichord and some don’t. But we’ll have a bit of discreet piano and we’ll also have the CityMusic percussionists and one or two of the church percussionists as well.

“But essentially, no two performances of the piece will be the same. This was true even in Ramírez’s day ­– much of it is going to be improvised. There are some twenty bar musical introductions to sections, but he states in the score that they can be longer or shorter depending on the circumstances. If it’s sounding great, just go on for a few more bars. If not, shorten it a bit. So we will be taking that approach and it is the right approach. I think it’s going to be a lot of fun to put together.”

Why does Bennett think the piece has become so popular around the world? “Apart from everything we’ve spoken about, Ramírez does have a natural gift for combining all these different features: the interesting rhythms and a particular way he writes melodies – they’re not folk melodies but they are kind of close to it. There’s a direct appeal with the excitement of all the percussion. It’s not a demanding piece and it’s fairly easy to understand. And it has a text that’s been around for thousands of years. There’s something kind of timeless about it as well. It’s just a really attractive piece.”

Yet another adventure for Bennett was finding the perfect work to connect the music of Mozart with that of Ramírez. “When I was asked to conduct these concerts, those two pieces that were already in place, so the Sarrier Overture in D is an attempt to connect those two worlds. He’s a Spanish composer from the early eighteenth century. But what’s interesting is that this piece only survives in one manuscript, which made its way over to the new world to Mexico. So it’s one of the very earliest symphonies that has survived in North America. Although it got its roots in Europe and the early classical era, it made its journey and was performed in the Spanish speaking new world. So in a sense it connects the two pieces.”

How did he happen upon this rarely-performed work? “As a musicologist, I just start looking around, usually with Grove’s Dictionary of Music and Musicians, my go-to source. We needed an overture for the program, but I didn’t know the early eighteenth century Spanish composers who were writing in the classical style. So I tried to find out who was writing in Spain around this time and his name came up. I found out he had one piece. It’s a great piece and it’s the right length. So it just checked all the boxes. It was kind of a lucky stroke, although it was almost impossible to get hold of the music, so that has been another adventure.”

What about the Mozart’s bassoon concerto? “It’s a masterpiece,” Bennett said, “and the music is easily available. It is a concerto, but it’s also a lovely piece of chamber music too, which is how we will be approaching it – a musical conversation between soloist and orchestra.”

Northeast Ohio’s Les Délices has long been that rarest of beasts: a world-class organization so proud of its region (ours) and repertoire (distinct niches in pre-1800 music) that it never tries to be everything to everyone, paradoxically making a strong case for a broad, curious international following. In the December episode of its SalonEra series, the ensemble embraces its strengths and community to marvelous effect. END_OF_DOCUMENT_TOKEN_TO_BE_REPLACED

END_OF_DOCUMENT_TOKEN_TO_BE_REPLACED

Another I remember fondly is Gian Carlo Menotti’s Amahl and the Night Visitors.  Commissioned by NBC, the one act, made-for-television opera, premiered on December 24, 1951, at the network’s studios in New York’s Rockefeller Center. And now, through the wonders of technology, Cleveland Opera Theater has created a magical new production of the work which is available on demand through January 6, 2021 (Three Kings Day). END_OF_DOCUMENT_TOKEN_TO_BE_REPLACED

Jessen has now followed up with her second solo CD, Winter Chapel. Recorded on January 17, 2020 in Oberlin College’s Fairchild Chapel and available on Carrier Records, the album is a continuum in Jessen’s journey to push the musical boundaries of her instrument and herself as an improviser. END_OF_DOCUMENT_TOKEN_TO_BE_REPLACED