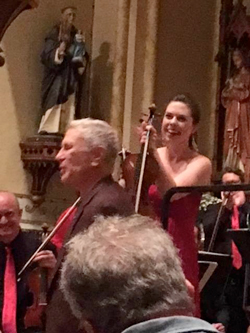 In an unusual example of regifting, Avner Dorman and CityMusic Cleveland bestowed an early 80th-birthday present on John Corigliano on Friday evening, October 20 at the Shrine Church of St. Stanislaus: a performance of his own ‘Red Violin’ Concerto, the solo part commandingly played by Tessa Lark. The composer flew in from New York for the occasion and gave some introductory notes from the church’s ornate pulpit.

The gestation of the concerto makes a fascinating story. It grew out of Corigliano’s score for François Girard’s 1988 film The Red Violin, for which the composer custom-tailored a solo part for Joshua Bell. He later used some of that musical material to create the Chaconne for Violin and Orchestra, premiered in 1997 by Bell with Robert Spano and the San Francisco Symphony.

With the ‘Red Violin’ Concerto, first performed by Bell with Marin Alsop and the Baltimore Symphony in 2003, Corigliano stretched his wings well beyond the film score, adding three more movements to the Chaconne and giving him the opportunity to “strip away any inhibitions and write a passionate and romantic essay that I probably would not have composed had it not been accompanying a film.”

The resulting work is highly eventful. Though it succeeds handsomely in capturing the emotional essence of a 19th-century concerto, Corigliano continuously titrates passion against modern, edgy gestures, and underpins his rhetoric with a solid and perceptible musical structure.

Tessa Lark, at the midpoint of five performances of the work in five days, displayed both an abundance of energy and great technical discipline. She cleanly dispatched what Corigliano calls “knuckle-breaking double harmonics” in the second movement scherzo, delivered an arresting recitative followed by flautando effects in the Andante, and proved to be rock-solid in the challenge Corigliano throws at the soloist in the finale — to play intentionally out of sync with the orchestra as soloist and ensemble accelerate the tempo at different times.

Music Director Avner Dorman kept everything neatly in place, and Lark and the orchestra collaborated impressively. After a standing ovation, the violinist revisited her Kentucky roots with a country fiddling tune that morphed into “Happy Birthday, dear John.”

Corigliano was bracketed by Schumann — the rarely performed Overture to his short-lived opera Genoveva, and the Third Symphony, which celebrates Germany’s storied Rhine River. St. Stanislaus is a big church with a large acoustic that can surround orchestral music with a gauzy nimbus. While some details of the Corigliano are probably still hovering about in corners of the nave, the Schumann pieces sounded warm and grand, even from the back benches where I heard the symphony. When chords locked perfectly in tune — which they frequently did — the effect was stunning.

Music director and conductor Daniel Meyer built his playlist around Cleveland themes and scenes. “Exploration CLE” made use of engaging selections from the classical canon and beyond that celebrated “what makes Cleveland so special.” Happily, he and his musicians avoided constructing a visual slide show, choosing to let the music speak for itself. END_OF_DOCUMENT_TOKEN_TO_BE_REPLACED

You could see the relationship at work on a practical level. Repertoire for two players at the same piano requires a certain choreography. There’s just one of each pedal to share, and the hand crossings left and right — which can be so fun to watch a soloist pull off — get more complicated when another person’s involved. At times, Pompa-Baldi drew a hand away from the keyboard and into his body, making room for Friscioni, and at the close of a few delicate phrases, the two were crouched together over the same final notes at one end of the instrument. END_OF_DOCUMENT_TOKEN_TO_BE_REPLACED

The signature sounds of these famous film scores are not so much John Williams’ invention as allusions to other classical pieces. The foreboding half-step from Jaws, growing more and more furious in the cellos and basses, shares something with Dvořák’s “New World” Symphony and Bartok’s Miraculous Mandarin. END_OF_DOCUMENT_TOKEN_TO_BE_REPLACED