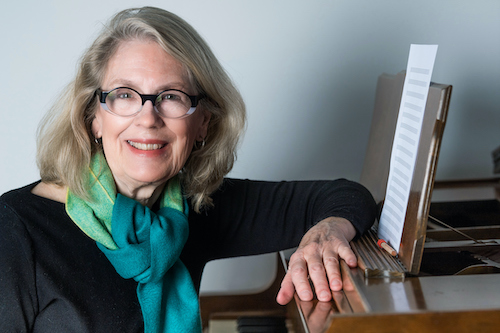 A clarinet and a string quartet are the traditional components of a clarinet quintet, an instrumentation that has spawned widely performed works by composers such as Mozart, Brahms, and Coleridge-Taylor.

But after CityMusic Cleveland clarinetist Ellen Breakfield-Glick reached out to Margaret Brouwer about the possibility of writing a new clarinet quintet, the composer considered the possibilities, noting to herself that she had already written one in 2005.

“I’m all about sounds and colors,” Brouwer said during a recent interview. “That’s one reason I wanted to have percussion — I thought it would give me a lot of new colors.”

Commissioned by CityMusic and inspired by the theme for the ensemble’s 2021-22 season — “Justice, Equality, Hope” — Brouwer’s Justice March for the unconventional combination of clarinet, violin, viola, cello, and percussion will receive its premiere on Saturday, April 23 at 7:00 pm at Shrine Church of St. Stanislaus.

The program, titled “Gems Old and New,” will also include Mozart’s Clarinet Quintet in A and Price’s Adoration, originally for organ but now heard in many forms, including clarinet and string quartet. The concert is free, but RSVP’s are requested.

In the first movement, “Gathering,” clarinetist Ellen Breakfield-Glick, violinist Masha Andreini, and violist Yael Senamaud will begin offstage — the clarinetist far out into the audience — before slowly joining together both physically and musically with cellist Trevor Kazarian and percussionist Luke Rinderknecht.

“I want there to be this surround sound, with different sounds coming from different places,” Brouwer said. “And by the end of the movement, the musicians are all together, playing more as one. I’m thinking of people from all parts of the world, with different cultures and different ideas, coming together to march for equality.”

The second and third movements are full of mixed emotions. In “March for Equality,” Brouwer described the music as hesitant at first, with a nervous energy — but by the end, determined. And “Illusive Hope” is just that. “As you get older, you realize that hopes don’t always come true,” the composer said. “So it has some sadness or longing to it.”

All of these descriptions have an asterisk, she added: she might see the piece differently after it’s performed. “I haven’t heard it yet, other than in my head.”

Brouwer was open about the difficulties she encountered writing this piece, particularly the first movement. “I struggled over that one for months,” she said. “I think I had eight different starts on this piece, but I was determined to make it work.”

Audience members might be surprised to hear about any creative struggles for someone like Brouwer, the recipient of a Guggenheim Fellowship and a Cleveland Arts Prize, among many awards, and formerly the head of the composition department at the Cleveland Institute of Music.

“Some pieces come really easily, and others don’t,” she said, “especially when I’m trying something new. But I don’t want to keep doing the same thing. If you look through all my music, you’ll see changes — it’s more interesting to me to try new things.”

Clarinetists seem to be drawn to Brouwer. “They keep commissioning me, so I’ve done a lot of pieces for clarinet,” she said. “But I like all the instruments. If somebody commissions me and it looks like an interesting project, then I do it.”

One of her better-known works for clarinet is No Rotary Phone, where the player doubles as a narrator delivering a comic tale about a phone call to customer service. Brouwer has also adapted the piece for solo violin on the recommendation of Mari Sato, who recorded it for Brouwer’s latest album, Reactions, released on the Naxos label earlier this month.

But here the piece appears under a different title, All Lines Are Still Busy — a concession to one or two technological changes that have occurred since the piece was written in 1995. “We were talking about it, and we realized that a lot of young performers probably don’t know what a rotary phone is.”

Photo by Ken Blaze.
Published on ClevelandClassical.com April 20, 2022.
Click here for a printable copy of this article
Return to the Front Page.

END_OF_DOCUMENT_TOKEN_TO_BE_REPLACED

Supported by engagingly, yet simple staging by Cara Consilvio, a well-prepared cast of singers told the archetypal story of Cinderella with charm and flair. Framing the production was  a sparse but colorful set and wonderful lighting by Dave Brooks. END_OF_DOCUMENT_TOKEN_TO_BE_REPLACED