From there she moved into Isaac Albéniz’s Asturias (Leyenda), noting in her bright, conversational speaking style how as a young guitarist, she had begged her teacher for years to be able to work on it. Given the sense of awe and amazement she was able to conjure in this performance — full of calm assurance in the rapid repeated notes — you have to wonder if one or two more guitar teachers out there will soon be hearing from their students.

Justin Holland’s beautifully easygoing See-Saw Waltz inspired those same attributes in Jiji’s playing, with just a few moments of unease in the articulation. On an interesting historical note, Jiji shared that this 19th-century Black musician was not only a composer, arranger, guitarist, and educator, but also a civil rights activist.

Moving into the present day, Jiji concluded her portion of the program with one work written for her, Gulli Björnsson’s Dynjandi, and another, Tania León’s Bailarín, written for her former teacher David Starobin.

The Björnsson goes back and forth, heating up and cooling back down in rhythm, mood, and harmony, while León favors a continuous sense of variety, packing together percussionistic elements, harmonics, strumming, dissonant harmonies, and big, sudden leaps across the fretboard into an intriguing mix. Jiji brought things to a close with a single, punchy articulation. 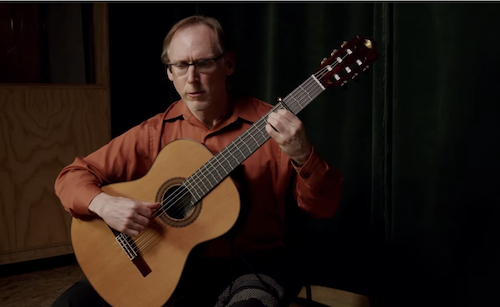 In the second half, playing against a dark backdrop, guitarist Daniel Lippel opted against speaking to the audience during the performance, instead sharing an informative talk about systems of temperament and microtonality at the end of the video.

Another difference in programming was his choice of two large-scale works, beginning with J.S. Bach’s Lute Suite No. 2 in c, BWV 997. Making use of a custom instrument that allows for fretboards to be slid in and out in order to vary the system of temperament, here he opted for the Werckmeister III system. (Listen to his post-concert explanation here.)

The difference between that and what is traditional today, equal temperament, was not especially noticeable to these ears, though it’s hard to say whether certain moments of musical color, especially during the dramatic cadences, were the result of the tuning system, or of the performer’s own palette of expression.

Lippel’s interpretation tended toward the subtle side, but his satisfying pacing of the Prelude, his expressivity and slight rubato in the Fugue, his enjoyable sense of the bassline in the Gigue, and his excellent technique in the seemingly never-ending runs of the Double all made a strong impression.

He closed with selections from Mirrored Spaces, which he co-wrote with Orianna Webb. As Lippel explained in his post-performance video, he tuned a couple of strings down for the microtonal first and fourth movements of this piece, which envelop you in a completely different world from anything else on the program.

The first movement, “Refracted,” is especially memorable for using that language to express a variety of sensibilities: lullaby, romance, and chaos. The second movement, “Sturdy” is another standout for its intriguingly blurry sense of mood and tonality. Lippel’s performance of this distinctive and impressive work was magnificent both technically and atmospherically.

END_OF_DOCUMENT_TOKEN_TO_BE_REPLACED

Rodgers & Hammerstein’s Cinderella was originally produced for television in 1957 — seven years after the animated Disney film was released — and starred Julie Andrews. According to the Rodgers & Hammerstein website, it was viewed by over 100 million people. END_OF_DOCUMENT_TOKEN_TO_BE_REPLACED

The story line has its origin in an 1855 play and an 1842 farce that Thornton Wilder mined for his 1938 play The Merchant of Yonkers. When that turned out to be a flop, in 1954 Wilder made the crucial decision to re-center the show around the character of the legendary marriage broker Dolly Gallagher Levi and renamed it The Matchmaker. END_OF_DOCUMENT_TOKEN_TO_BE_REPLACED

The Dodero Center for the Performing Arts at the Gilmore Academy in Gates Mills is one feature of an impressive campus. The auditorium is shallow, the stage is deep, and the ensemble played without a shell. Throughout the program, the sound, especially in instruments’ lower registers, tended to disappear. END_OF_DOCUMENT_TOKEN_TO_BE_REPLACED