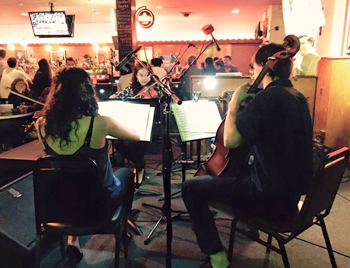 Classical Revolution Cleveland can most frequently be found at Cleveland’s beloved West Side neighborhood hot dog bar, the Happy Dog on Detroit Ave. CRC is naturally right at home in the culturally rich Gordon Square Arts District, which has recently gained significant national recognition, most prominently in a September 2014 New York Times. In fact, a photo featured in the article depicts CRC musicians performing at the Happy Dog.

Classical Revolution was born in 2006, founded by Charith Premawardhana in San Francisco. Since then, it has expanded to several cities, becoming a national movement with a unified mission as a “platform for classical music to be heard in unconventional places by new audiences,” explained Clayton Karas. Cleveland’s own Classical Revolution project began in 2009 with performances by classical musicians at various Cleveland pubs and bars, including Tremont’s Prosperity Social Club and University Circle’s Barking Spider Tavern. CRC was originally directed by violist Bill Johnston, who then passed the baton to Shuai Wang, pianist and director of Cleveland-based collective Ars Futura. From January through August 2014, CRC was co-directed by Ariel Clayton Karas and Jeiran Hasan. Clayton Karas, who has been regularly performing with Classical Revolution since 2009, has served as the sole director of the group since September 2014.

“I love being part of the central national movement of Classical Revolution, but I also recognize that Cleveland is its own city. It has its own demographics, performing arts community, and culture around The Cleveland Orchestra and classical music. I’m happy that while we’re part of the national movement, we can still make decisions about how shows run and what we do based on what we feel is uniquely relevant to Cleveland.” 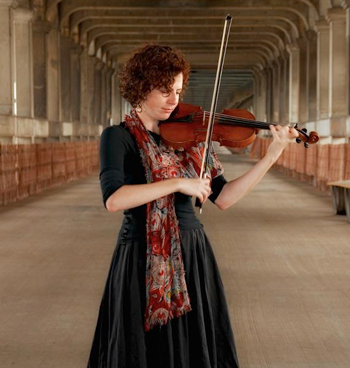 Clayton Karas, who began playing with CRC while she was still a student at the Cleveland Institute of Music (CIM), explained that the Cleveland organization’s primary performers “are CIM and Oberlin students, freelance professionals, and occasionally orchestra members or accomplished musicians working in other professional disciplines.” While some city chapters primarily feature jam sessions and sight-reading, Cleveland’s concentrates on pre-formed groups and individuals, giving them the opportunity to promote themselves and their work.

In addition to bars, Classical Revolution Cleveland performs at a myriad of other unconventional venues around town. Past performance spaces have ranged from the Federal Reserve Bank downtown (a benefit for the United Way) to art galleries and the sidewalk in front of Cleveland Public Theater. In June, CRC will make an appearance at Larchmere Porchfest.

The heart of Classical Revolution Cleveland, however, is undoubtedly its residency at the Happy Dog, which began in 2010. Clayton Karas described Sean Watterson, owner of the Happy Dog, as “one of the most genuine, open-minded, and effective advocates for the arts in Cleveland.” He and his former business partner, the late Sean Kilbane, turned the bar on its head to become a multidimensional venue.

“Watterson does much more there than program bands,” Clayton Karas explained. “Among other things, the Happy Dog hosts lecture series, The City Club of Cleveland, and representatives from the Cleveland Museum of Art.” The list goes on. “He is so open to trying new things, so it has become a great home base, and he’s given us every third Tuesday of the month to play. It’s really wonderful continuity for us. Sean has been a great advocate and friend to our mission.” 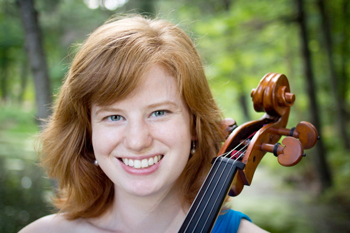 While the Happy Dog performances are enjoyable and entertaining for audiences and performers alike, they also serve as a productive tool for the musicians. Sophie Benn, a Professional Studies cello student at CIM, shed light on her personal experiences at the venue: “Classical Revolution is a fun way to try out new repertoire or prepare for a concert. Since the setting is a bar and not everybody is paying rapt attention, there’s less pressure to play flawlessly. The audience generally responds much better to musicians who are having fun than to those who are trying too hard to be perfect and serious. Of course, it’s still important to play as well as you can, but it’s great to remember that sometimes it’s enough to prepare well and then have fun in performance — it’s definitely helped me relax in more formal settings to have this kind of experience.” 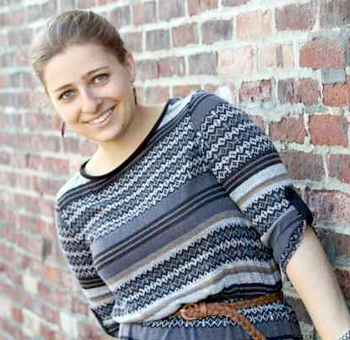 Victoria Lewis, a violin Masters student at CIM, asserted, “Playing at the Happy Dog is enormously helpful and fun as a performing classical musician. Through frequent Classical Revolution performances, I have consistently seen both regulars and new faces in the audience, which is extremely supportive. They are there to enjoy the music, never to criticize. It is wonderful as a performer in this environment to be able to focus on telling a story and getting emotional reaction out of the crowd. The audience is always receptive to this, and they pick up on exciting, active music making.”

Clayton Karas said that openness to playing in unconventional concert settings is vital for the modern classical musician, and it requires a unique performance skill. “Conservatories are tight-knit communities where everyone is supportive and goes to each other’s performances. Students automatically have an audience and a pristine recording; everyone is silent and claps in the right places. Then, when they go to play in a bar, the difference can be shocking! It compels musicians to rise to the occasion of their performances even more.”

Audience engagement is a craft in itself, Clayton Karas added, and CRC serves as a fruitful outlet for musicians to improve their communication and stage presence. “The performers have to command the attention of the audience when they introduce themselves and their music, speaking loudly and clearly into the microphone to create a captivating demeanor.” This is imperative, she said, as it sets the tone for the performance “before they even play their first notes.”

While CRC is rooted in classical music, “the line where classical music begins and ends is not clearly defined,” said Clayton Karas. CRC performances can range from “traditional chamber music, solo instrumental, or opera to cabaret, jazz-infused, or folk music.” It is all innately connected. The most recent Happy Dog performance in April even featured an opera flash mob in which members of the Cleveland Opera Theater were unknowingly scattered throughout the bar, and all at once, the entire room “erupted in song.” Clayton Karas continued, “I’m not opposed to people bringing in music that is out of the box. This is welcomed and keeps the program balanced. We like to keep an open mind.”

So why not have some Bach with your beer? In all, Classical Revolution Cleveland takes an unlikely blend of classical music, creatively topped hot dogs, and camaraderie and transforms it into inspired entertainment.

Classical Revolution Cleveland will next appear at the West Side Happy Dog at 5801 Detroit Ave on Tuesday, May 19 from 8:00-10:00 pm. In addition to its monthly “third Tuesday” appearance at the Happy Dog, special events are posted on the Classical Revolution Cleveland Facebook page. More information and musician profiles can be viewed on the CRC blog.

Pictured at top: the Allencroft Quartet from Oberlin Conservatory of Music

The history of classical music sometimes borders on mythology. The music on the Akron Symphony’s Saturday, February 22 program has taken on this fabled, quasi-historical quality — Mozart’s Requiem, Schubert’s “Unfinished” Symphony, and Beethoven’s over-finished Leonore Overture No. 3. Fortunately, in performance the music more than lived up to the story. END_OF_DOCUMENT_TOKEN_TO_BE_REPLACED

Cleveland’s Baroque Orchestra celebrated the Valentine’s Day weekend with four performances of “L’Amore: An Old Italian Valentine.” I heard the second concert on the evening of Valentine’s Day itself at St. Paul’s Episcopal Church in Cleveland Heights. Apollo’s Fire conductor and harpsichordist Jeannette Sorrell greeted the audience with the adage, “Italian is the language of music, of the angels, and of love.” END_OF_DOCUMENT_TOKEN_TO_BE_REPLACED

Every so often, the first seconds of a concert bring neither anxiety over how the rest will go nor twitchy overstimulation, neither boredom nor ecstasy, but a satisfying assurance. Some performances click right away, the musicians’ technique unimpeachable, their artistry and expression powerful, their manner warm but professional. Such concerts hold attention in a special way — the chances of a misstep negligible enough that listening never involves comparison to an abstract standard. In the Phaeton Trio’s recent tour de force in Rocky River, the initial gestures of the performance set a high standard that held throughout. END_OF_DOCUMENT_TOKEN_TO_BE_REPLACED

Musicians love a good metaphor: take, for instance, that of summiting a mountain. When a violinist speaks this way after playing all of Bach’s partitas, or a soprano recalls preparations for a Wagner opera, the image of the artist mounting some hostile peak offers implications of persistence, struggle, and of course triumph. Pianists might describe Beethoven’s sonatas this way. But how many have actually played at the top of a mountain? Archival video confirms that French pianist Pierre Réach literalized this image of the soloist at the summit over twenty years ago. A recent concert in Cleveland confirmed that the figurative Everest of Beethoven’s piano music still bears his banner as well. END_OF_DOCUMENT_TOKEN_TO_BE_REPLACED

The Cleveland Orchestra — or at least half of it — marked Valentine’s Day with a straight-through, 50-minute concert led by Belgian early music guru Philippe Herreweghe. The February 14 performance, marketed as a romantic evening of orchestral classics, played to a packed house (marketing works!). END_OF_DOCUMENT_TOKEN_TO_BE_REPLACED