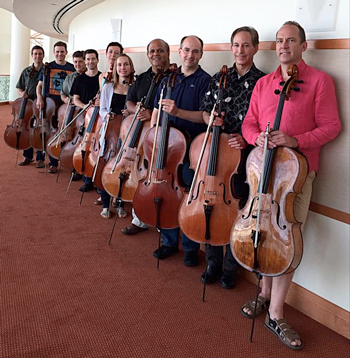 “Julius Klengel’s Hymnus looks a little intimidating in the score, with its twelve individual parts,” TCO cellist Bryan Dumm said in a telephone conversation. “But it’s a charming piece in a Romantic style. We’ll be doubling the parts, with Youth Orchestra players sharing stands with Cleveland Orchestra cellists. Having twenty-two cellists onstage at the same time will thicken the texture and make the piece even a bit nicer. It’s going to sound ringing and quite glorious in Harkness Chapel.”

At a Cleveland Cello Society brainstorming session last summer, Dumm proposed a concert of music written by cellist-composers for this year’s edition of iCellisti. “We try to come up with an interesting and innovative idea every year, and this was one that came to the surface,” Dumm said. He was encouraged to run with it. “I was delighted to find that the whole Cleveland Orchestra cello section was available for the concert — except for one player who had a conflict. I believe this is the first time that the whole group will participate in iCellisti. A lot of things just fell into place.” 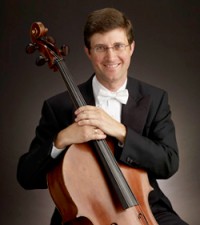 Having taken the lead in designing the program for January 30, Dumm (left) will also serve as narrator for the concert. “My personal journey into music for multiple cellos began seven or eight years ago when I was asked to teach a graduate course in cello repertoire at Cleveland State University. There was no curriculum, so I began to research what music was available and fell in love with the repertoire.”

The program will feature a series of soloists — Brian Thornton in Carlo Alfredo Piatti’s Caprice No. 1, Richard Weiss in Gaspar Cassadó’s Requiebros, and Mark Kosower in Adrien-François Servais’s Souvenir de Spa, with the collaboration of pianist Jee-Won Oh — plus duets and quartets by Cervetto, Berteau, Boccherini and Fitzenhagen. “A focal point is Mark’s Souvenir,” Dumm said. “Most cellists consider it completely unplayable, but our section leader is very willing to learn new music.”

As it turned out, not all the composers on the program were practitioners of the instrument. “Richard Wagner wasn’t a cellist, of course, so that’s a stretch. But Friedrich Grützmacher, who arranged the Feierliches Stück from Lohengrin for four cellos, is very well known, and stands in the long tradition of cellists arranging other people’s music.”

Bryan Dumm isn’t absolutely sure who first had the idea of creating music for multiple cellos. “The earliest work on Friday’s program is a canon for two cellos, but that comes out of the baroque trio sonata tradition where one cello takes the solo line and the other plays continuo. As for ensemble pieces, the earliest one we’re doing is one of Wilhelm Fitzenhagen’s concert waltzes for four cellos. We were looking for cellists who had strong influences on great composers. He’s best known as the dedicatee for Tchaikovsky’s Rococo Variations, and is responsible for determining the order of the variations most often played today. The concert waltz is a very nice piece.”

How is it that music for multiple cellos works so well? “We all like each other a lot,” Dumm said. “Cellists are pretty easygoing and we don’t tend to get on each other’s nerves too much. The ‘mellow cello’ is an accurate stereotype. And because we’re so often all alone in chamber music, it’s fun to have the opportunity to play together.” 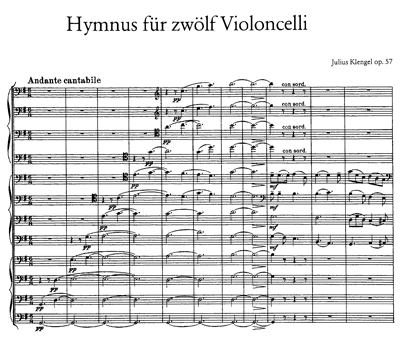 So many of Dumm’s colleagues came forward with repertoire suggestions for this year’s iCellisti that not every proposal made it onto the program. “We could easily have filled another recital,” he said. “Right now it has the right sort of flow and variety to it. I’m glad to have all my colleagues together for it.”

Top photo: The Cleveland Orchestra cello section at the Arsht Center in Miami.

END_OF_DOCUMENT_TOKEN_TO_BE_REPLACED

Franz Welser-Möst led the final bows on Saturday night at Severance, like the star of any show should. The Cleveland Orchestra’s music director is in his element presiding over the ensemble’s annual opera production, which this season packs the drama. Verdi’s Otello — in a concert staging that opened May 21 and runs for two more performances (May 26 and 29) — demands big voices, instrumental forces to match, and a conductor who can give it all shape and direction. END_OF_DOCUMENT_TOKEN_TO_BE_REPLACED

The cimbalom was the feature of the show, an instrument capable of taking on many personas. Its performer, Chester Englander, has shaped his career around the instrument, and has inspired composers to write more repertoire for it, some of which was presented on the program. END_OF_DOCUMENT_TOKEN_TO_BE_REPLACED