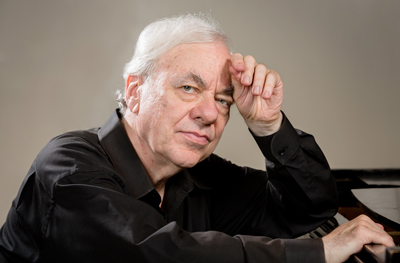 Goode is a celebrated interpreter of the music of Beethoven, and was the first American-born pianist to record all 32 sonatas (for Nonesuch in 1991). Earlier, he won the Young Concert Artists International Auditions in 1961, took first prize in the Clara Haskil Competition in 1973, and won the Avery Fisher Prize in 1980. He recently completed a 14-year tenure as co-director (with Mitsuko Uchida) of the Marlboro Music School and Festival, the Vermont summer retreat where he spent a total of 22 summers beginning at the age of 14.

We spoke with Richard Goode last week by telephone. He was in San Francisco, preparing for a solo recital.

Daniel Hathaway: Where will you be playing in San Francisco?

Richard Goode: I’ll be playing in Herbst Theater, right near Davies Hall in the middle of everything. It’s an all-Bach concert. I think you can get 15 or 20 wonderful programs from Bach’s works — you can mine that repertoire endlessly.

DH: I think it’s been a while since you last appeared in Cleveland.

RG: I can’t remember the last time, but I did play for the Chamber Music Society a number of years ago.

DH: Let’s talk about your program, which begins and ends in c minor — with the Bach second partita and Schubert’s great sonata.

RG: I hope that’s not too severe. I’ve always loved Bach’s second partita. It’s a powerful piece with a grave beginning leading to a fugue. Each partita has as distinct a personality as any Beethoven sonata. This one in particular has a motivic unity, especially in the first movement, that I find very compelling. There’s an extraordinary depth in the Sarabande, and a certain wildness in the final Cappricio —  which is bouncy like the last movement of the double violin concerto.

RG: I thought that between the Bach and the Schubert I should play something different — very different in the case of the Schoenberg pieces, which provide a spot of contrasting color. But I realized after constructing the program that in a certain way every piece on the first half is very contrapuntal, even the Schoenberg. Those six pieces are very short, but there’s a lot going on in the voices, especially in the first one.

And then Beethoven, especially in the last sonatas, becomes increasingly contrapuntal. But I think the most important thing for me is to place Op. 110 between the two severe pieces. The peaceful, serene quality of the first movement is very important for the emotional balance of the program.

The Schubert c-minor has perhaps more of a Beethovenian cast than almost any other Schubert sonata, and you don’t always feel the presence of Beethoven in Schubert. I think composers are very much influenced by keys — and by what’s been written in those keys by composers before them. I’m sure that Schubert was very aware of Beethoven in his c-minor mood, and he shows that particularly in the first movement. In fact, I feel that the third movement — the A-flat movement — is a Beethoven-like hymn.

DH: You’re highly regarded for your interpretations of Beethoven. Who have been your major influences there?

RG: I think I worked with Claude Frank too young to be influenced that much. I only remember studying one piece with him, Beethoven’s first concerto. Rudolf Serkin influenced me greatly. One of the first concerts I can remember hearing was Serkin playing Op. 101 and the Diabelli variations. I also heard him play Op. 110. But more than that, I heard him frequently at Marlboro and studied with him at Curtis. His general approach to music and to Beethoven specifically was very influential. I think probably the strongest impression any performer gave me in my early teenage years was Serkin’s Beethoven with its dramatic intensity. Also pieces like the Schubert A-Major Sonata, which I didn’t know before I heard Serkin play it. He had a dramatic engagement with the music, and I also have to say with the piano itself.

But subsequently I was very much influenced by Schnabel. I only heard him in recordings, but his sense of form and the articulateness of his approach to musical structure and balance, phrasing and detail was powerful. And Mieczysław Horszowski also made a great impression at Curtis. He was temperamentally so different from Serkin, and yet so cogent and beautiful in his approach to Beethoven as well as to all the other music I ever worked on with him. He was one of those people who could approach Bach, Chopin, Beethoven, Liszt, and Schubert with equal authority and understanding.

DH: I promised to keep this brief, so I have only one last question. I read in your biography that you and your wife have amassed a 5,000-volume collection of books in your home in New York. What do you like to collect?

RG: Well, you know, I’m not a collector, I’m an accumulator. I have a passion for buying books. I read quite a few books, but certainly nothing like the volume of books that I buy. It’s apparent to me that that’s become a problem! I read a great deal of art history, a lot of fiction and poetry, memoirs, essays — all kinds of things. I don’t have a special field, and if I acquire a valuable book, it’s by accident. I may have some first editions there, but in most cases, I didn’t know about them before I bought them.

END_OF_DOCUMENT_TOKEN_TO_BE_REPLACED

The strings-only work by Berg has made relatively frequent appearances on the Orchestra’s programs. In 2021, the musicians recorded it for the In Focus series, and it appeared again on last year’s European tour. Friday’s rendition maintained the group’s characteristic light and effortless playing, each section blending as much as possible to echo the work’s original form as a string quartet. At fifteen minutes total, the piece is quite short, but the dense encoded musical meanings require some extra-attentive listening. Splitting up the three movements ensured that each one could be appreciated on its own. END_OF_DOCUMENT_TOKEN_TO_BE_REPLACED