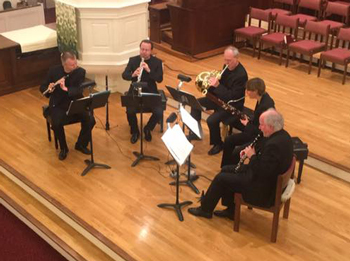 If you follow the stream of distinguished chamber music ensembles that tour Northeast Ohio each year, you get the feeling that many of them are making the area their second home. However, when the Berlin Philharmonic Wind Quintet made their fifth appearance on the Cleveland Chamber Music Society series on February 8, their splendid, refined performance made you wish they would come through town more often.

Just as Haydn was the father of the string quartet, Anton Reicha is credited as being the first major composer to write for the wind quintet. The Berliners paid tribute to Reicha’s contributions to the wind music canon with a charming performance of his Andante arioso for English Horn and Woodwind Quartet, which opened the program. Although each instrument gets its moment to shine, the eight-minute work is a showcase for the English horn, and Andreas Wittmann sounded wonderful, especially during the cadenza.

Composed for the ensemble in 2014, Finnish composer Kalevi Aho’s Quintet No. 2 is a fascinating four-movement work that explores every hue of the sound palette that wind instruments — including piccolo, alto flute, and English horn — are capable of producing. Symphonic in structure, Aho’s Quintet begins with the fourteen-minute “Ruhig beginnend—Bewegter.” Opening with soft, dark sonorities that gradually build to a fiery climax, the movement sets the tone for the entire piece.

The second movement (“Sehr schnell, wild”) is an untamed march featuring a dazzling piccolo solo. A pensive bassoon solo begins the contrasting, slow movement (“Ruhig fließend”), and Aho brings the Quintet to a close with a lighter, yet still energetic finale (“Lebhaft”). Following the opening clarinet solo, the movement becomes ever more frenzied until it collapses, fading into silence with a long-held note from the English horn.

György Ligeti’s Six Bagatelles provided a humorous interlude, spanning a range of emotions and musical gestures. They’re short enough that if you didn’t care for one of the pieces, you had only to wait a minute or two for the next one. The Berliners’ technically superb and musically adroit performance brought out the individual character of each “little nothing,” from the spirited to the elegiac (including an Adagio in memory of Belá Bartók). You could imagine the final Capriccioso as the soundtrack to a Tom and Jerry cartoon.

Carl Nielsen’s Quintet in A, Op. 43 is a standard of the wind quintet literature, and the Berliners brought off a polished, no-fuss performance to end the evening. The attractive variations that form the last movement are little character sketches of members of the Copenhagen Wind Quintet for whom Nielsen wrote the piece. Each of the Berlin players brought their own personal style to the task in a performance that sparkled with color and imagination. The concluding Andante festivo made a grand ending, its final chord resonating boldly in the hall, grounded by bassoonist Marion Reinhard’s low A.

The enthusiastic audience was not going to let the evening end there. The Quintet obliged with a short suite of American folk tunes.

The cimbalom was the feature of the show, an instrument capable of taking on many personas. Its performer, Chester Englander, has shaped his career around the instrument, and has inspired composers to write more repertoire for it, some of which was presented on the program. END_OF_DOCUMENT_TOKEN_TO_BE_REPLACED

You wouldn’t expect that acoustic from a glance at the nave, which is wide and long, but not especially lofty. But when I guest conducted a local amateur choir and professional orchestra in Beethoven’s Mass in C there a few years back, during the first rehearsal we released the final chord of the “Gloria” and listened in astonishment for the next several seconds. The sound continued to roll down the space like the big wave that surfers dream about. END_OF_DOCUMENT_TOKEN_TO_BE_REPLACED