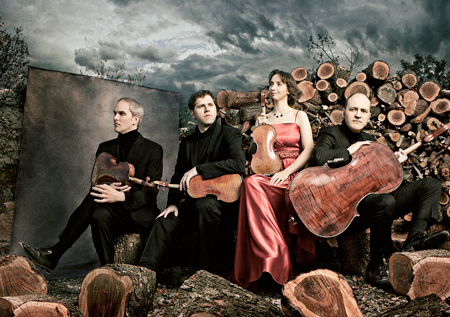 The Barcelona-based Cuarteto Casals will continue the Cleveland Chamber Music Society’s 66th season at Plymouth Church in Shaker Heights on Tuesday, October 27 at 7:30 pm with a program of string quartets by Joseph Haydn, Dmitri Shostakovich, and Ludwig van Beethoven.

Formed in Barcelona in 1997, Cuarteto Casals soon rose to international prominence with first prizes at string quartet competitions in London and Hamburg. Violinists Vera Martínez Mehner and Abel Tomàs Realp, violist Jonathan Brown, and cellist Arnau Tomàs Realp have joined the King of Spain on diplomatic visits and have performed on the special, decorated Stradivarius instruments housed at the Royal Palace in Madrid. Collaborations with György Kurtág, Christian Lauba, and James MacMillan have underlined the ensemble’s commitment to contemporary music. All of the players live in Barcelona, where they are the quartet in residence at the Escola Superior de Musica de Catalunya.

The quartet’s current tour takes them to Durham and Southern Pines, North Carolina; Montgomery and Auburn, Alabama; Toronto, Ontario; and San Juan, Puerto Rico before ending in Cleveland. Cuarteto Casals’ program on October 27 will begin with Haydn’s Quartet in f, Op. 20, No. 5, continue with Shostakovich’s Quartet No. 5 in B-flat, Op. 92, and end with Beethoven’s Quartet No. 12 in E-flat, Op. 127.

For those who would like to experience what goes into creating a fine string quartet, on Tuesday morning, October 27 at 10:00 am, Cuarteto Casals will give a master class in Mixon Hall at the Cleveland Institute of Music. The session is free and the public is welcome.

Chicago-born violist Jonathan Brown joined the quartet in 2002 and serves as its English language spokesperson. Eric Kisch, host of WCLV’s Saturday morning program “Musical Passions,” will interview Brown in Herr Chapel at Plymouth Church at 6:30 pm before the quartet’s concert on October 27.

To provide a bit of background, here are portions of a telephone conversation ClevelandClassical enjoyed with Jonathan Brown in October of 2013, just before Cuarteto Casals’ previous visit to Cleveland. We reached him on the road in Tallahassee, Florida. 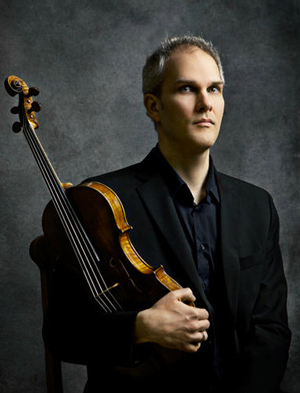 Daniel Hathaway: You’ve been with Cuarteto Casals now for eleven years. How did you come to join the ensemble?

Jonathan Brown: I was studying in Salzburg and playing with the Camerata Salzburg while Cuarteto Casals was studying with the Alban Berg Quartet in Cologne. The official story is that we had a mutual teacher, Rainer Schmidt from the Hagen Quartet, who lived in Salzburg, who I knew from the Mozarteum and with whom the quartet had also had a number of master classes. When the quartet’s previous violist left, Rainer recommended them to me and me to them.

Unofficially — but truthfully — the day that their violist finally decided to leave, Arnau (one of the two brothers in the quartet) was in Spain teaching and Abel was still in Cologne. They were talking on their cell phones about what they would do. They were somewhat panicked because they had competitions, recordings, and concerts coming up and all of a sudden they had no violist.

Abel was walking in the street near the cathedral and he saw somebody eating bread out of a bag and carrying a viola. He jokingly said to his brother, ‘well, here’s a violist, why don’t we just invite him?’ Later that night, Abel went to a concert in Cologne where I was playing with the Camerata Salzburg, and he spotted the same person he saw in the street sitting in the viola section. When I showed up to audition with the quartet six weeks later, I turned out to be that person. If he’d just asked me in the street, it would have saved us all about six weeks of rehearsal time.

DH: What was it like adapting to life in Catalunya?

JB: That was great. I’ve lived there now for ten years. At the beginning it was much harder. I had come to Europe to study in Austria, so I spoke German. When I moved to Spain I spoke no Spanish and certainly no Catalan. Adjusting linguistically was difficult, although now that I know Spanish and Catalan it’s fine. It’s a great place to live. Barcelona is a beautiful city, the sun shines, the food is great, the lifestyle is great.

DH: How does the quartet communicate? In Spanish or Catalan?

JB: Spanish. The two brothers speak in Catalan with each other, and both Vera and I speak Catalan, so we understand everything they say, but we’re so used to Spanish we stay with that language.

DH: What instruments will you play on in Cleveland?

JB: We’ll be playing on four very different instruments. We always try to match our sounds as much as possible, but we haven’t been dogmatic about trying to find instruments from the same maker or the same period. So Vera Martínez, who switches off with Abel on first violin, plays an old Italian Ceruti instrument, and Abel plays a violin by a living Catalan maker named David Bague, who makes wonderful instruments. Arnau plays an Italian cello made in the 1930s or ‘40s, and my viola is of unknown origin from the first half of the 17th century — probably from southern Germany or Austria, possibly from northern Italy, but nobody is able to say for sure.

DH: How often does the quartet get their hands on those Spanish Strads?

JB: That we’ve done about once every year, or once every other year. Those are wonderful instruments. They’re incredible as art objects. As instruments to play, it’s difficult because we don’t have so much time to practice or rehearse on them and they’re very, very different from our own. So it’s always a challenge playing them, but of course it’s a great privilege.

END_OF_DOCUMENT_TOKEN_TO_BE_REPLACED

Rodgers & Hammerstein’s Cinderella was originally produced for television in 1957 — seven years after the animated Disney film was released — and starred Julie Andrews. According to the Rodgers & Hammerstein website, it was viewed by over 100 million people. END_OF_DOCUMENT_TOKEN_TO_BE_REPLACED

The story line has its origin in an 1855 play and an 1842 farce that Thornton Wilder mined for his 1938 play The Merchant of Yonkers. When that turned out to be a flop, in 1954 Wilder made the crucial decision to re-center the show around the character of the legendary marriage broker Dolly Gallagher Levi and renamed it The Matchmaker. END_OF_DOCUMENT_TOKEN_TO_BE_REPLACED

The Dodero Center for the Performing Arts at the Gilmore Academy in Gates Mills is one feature of an impressive campus. The auditorium is shallow, the stage is deep, and the ensemble played without a shell. Throughout the program, the sound, especially in instruments’ lower registers, tended to disappear. END_OF_DOCUMENT_TOKEN_TO_BE_REPLACED