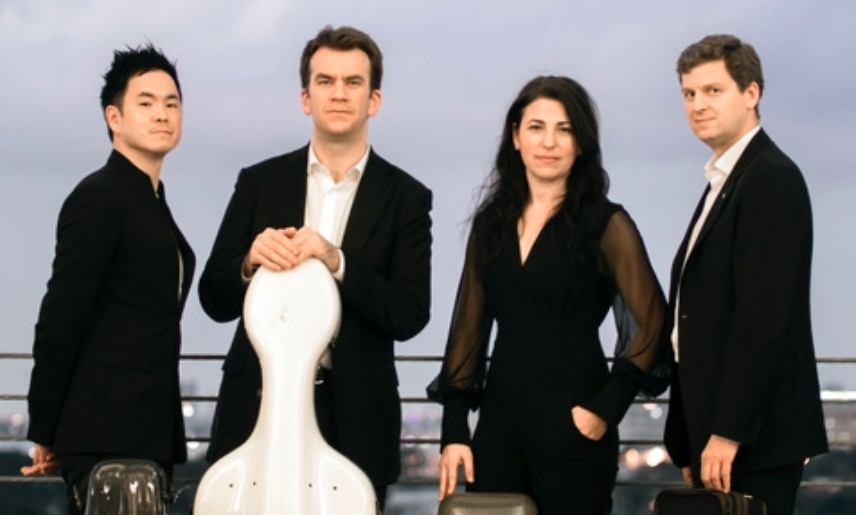 Fans of Canadian violinist James Ehnes recently got to enjoy his artistry twice in one month — first on the Oberlin Artist Recital Series with pianist Andrew Armstrong, then with his string quartet on the Cleveland Chamber Music Society series. And ChamberFest Cleveland admirers of violinist Amy Schwartz Moretti didn’t have to wait until next summer to hear her play again. The two joined violist Richard O’Neill and cellist Edward Arron in ravishing performances of quartets by Beethoven, Elgar, and Bartók on November 13 at Plymouth Church.

The Ehnes departed ever so slightly from the conventional order of old piece — newer piece — Romantic piece, beginning their program with the not-so-frequently heard Op. 18, No. 4 of Beethoven, followed by Elgar’s Op. 83 and Bartók’s No. 5.

The Quartet began the only minor-key work in Op. 18 with appropriately dark, visceral tone. There’s no slow movement in this piece, rather a scherzo-like Andante in C Major that begins with fugal gestures, followed by a Minuet that marks a return to the minor mode of the rest of the quartet. The Ehnes played the finale with abandon, fairly racing through its prestissimo coda to terrific effect.

Was it just a coincidence that led the Ehnes to program Elgar’s e-minor Quartet, written in 1918, close to the hundredth anniversary of the Armistice that ended World War I? If that was intentional, the gesture certainly resonates with the musical content of the work, which is both backward-looking in spirit and forward-looking in form. The Quartet got under its skin in an expressive performance that was equal parts sunny and elegiac.

The fifth of Bartók’s six quartets gave the Ehnes Quartet a wealth of diverse material to put across to the audience. They did that stunningly, from the hammering unisons of the first movement, through the gauzy, mysterious night music of the second, to the complicated Bulgarian folk rhythms of the third-movement Scherzo, the anguished cries of the fourth, and the humor of the finale with its Psycho-like violin stridencies. If you didn’t think a Bartók Quartet could be riveting and fun from one end to the other, the Ehnes were out to prove you wrong.

At his Oberlin recital in October, James Ehnes kept a witty, running commentary going throughout the program. On Tuesday, he spoke only once. “Want something else?” he asked the audience after the Bartók. Yes they did, and the “something” the Quartet obliged with was both charming and substantial. The finale of Beethoven’s Op. 59, No. 2 Quartet provided a rollicking conclusion to a great evening of chamber music.