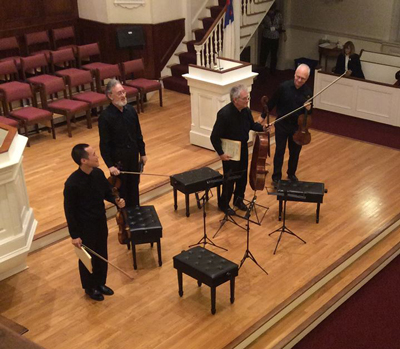 It was Austrian night in Cleveland last Tuesday. In Severance Hall, the Vienna Boys Choir was working its holiday magic, no doubt beautifully. In Plymouth Church in Shaker, where I was, the Juilliard String Quartet gave a different sampling of Vienna, presenting three masterpieces by composers intimately associated with Vienna — Anton Webern, Franz Josef Haydn, and Franz Schubert.

To a nearly packed house, the Juilliard played with their characteristic romanticism, never shying away from channeling the music’s emotionality. Added to the usual audience of the Cleveland Chamber Music Society were a number of string students from the Cleveland Institute of Music, with whom the members of the Juilliard were spending a week in coaching and master classes. As might be expected when one of the country’s greatest ensembles plays for such an audience, the quality of listening seemed concentrated and purposeful.

So was the playing. The quartet — which, amazingly, has been in existence since 1946 — is thriving in its newest embodiment, with first violinist Joseph Lin (2011) and violist Roger Tapping (2013) having recently joined veterans Ronald Copes (second violin, 1997) and Joel Krosnick (cello, 1974). Lin’s lyrical tone and intelligent leadership has great potential, and it is a joy to listen to Tapping’s alternately soulful and energetic voicings of the crucial inner viola line.

As a group, the four musicians are deeply grounded in the literature they play. One could hardly ask for a deeper sense of passion and understanding. And yet the Juilliard’s sound as a whole has not yet found a center for its four disparate voices. Krosnick’s gruff and gutsy playing in the bass register seemed at times almost in a world to itself, disassociated from Lin’s precise clarity at the top of his range. As the quartet evolves into its seventh decade, listeners will be curious to hear how these voices negotiate their differences.

It is surely a mark of the quartet’s respect for the audience of the Cleveland Chamber Music Society that they opened the concert with Anton Webern’s challenging Five Movements for String Quartet, Op. 5. More than a hundred years after their composition, these knotty enigmas still command the most intense attention. At times thorny and then suddenly melting into Viennese schmaltz — but only for a moment! — Webern’s daring miniatures evoke a pre-war Vienna that is as noir as Orson Welles could imagine. Streetcars clang, Krupp’s armament factories are flourishing, but white-tie and ball-gowns still flash behind the curtained windows of the wealthy. Is Webern shattering the forms of classical music, or opening the doors to the rich modernism of the twentieth century? Or both? 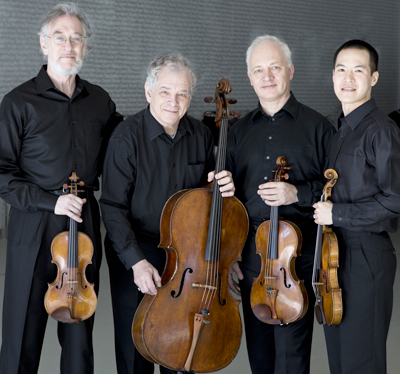 It is an unusual concert that puts Haydn, the great master of the first Viennese school, after the warm-up piece. We think of Haydn as a witty composer — and he was — but in the hands of the Juilliard, this performance of Opus 33, number 5 in G, was far more serious than witty. Published in 1781, ten years after Haydn’s previous collection of quartets, the six quartets of his Opus 33 glow with an incipient romanticism that heats up the galante courtliness that is their native language. The G major quartet particularly stands out for its lush second movement, an extended aria for the first violin in G minor. Lin played with unabashedly romantic technique — prominently sliding on the shifts, pulling out threads of melody high up on the lower strings, and approaching the cadences with a suspenseful rubato.

The second half of the concert was even more Romantic. Schubert’s tragic “Death and the Maiden” quartet, D. 810, a resolutely D-minor masterpiece, is a high-Romantic oration, obsessive, repetitive, and at the same time deeply moving in its perception of anxiety. Moments of Schubertian lyricism flash like lightning through a texture of impassioned struggle.

The Juilliard gave the entire quartet a heroic and despairing quality, as if it were the narrative of a noble knight fallen into a dreadful pit of shame. What everyone wants to hear in “Death and the Maiden” is the second movement, an extended set of variations on Schubert’s own song of the same name, a dark tale of proto-Freudian necrophilia. The Juilliard gave it a spine-chilling rendition: the opening as soft as goose down, the variations agitated and virtuosic.

In the wild third movement, the tone was vividly (and appropriately) strident, the performers over-bowing, rasping deep into the strings. The final movement continued the mood of grotesque tragedy in the intense voice of late Beethoven: jaunty assurance dashed by a slithering, elfish ambiguity.

Edgy and at times raucous, this was the Juilliard at its finest. Much as the audience applauded, there was no encore possible after the Schubert, and we went home, as Milton says, “all passion spent.”