On Tuesday, April 19 at 7:30 pm, Canellakis will join violinists Ani Kavafian and Erin Keef, violists Yura Lee and Matthew Lipman, and fellow cellist David Finckel, in a program of string sextets by Richard Strauss, Antonín Dvořák, and Johannes Brahms on the next Cleveland Chamber Music Society concert at Plymouth Church in Shaker Heights.

Canellakis is thrilled to be playing this program. “These pieces are so rich in terms of sonority and the permutations between duos, trios and every other combination you can get from six players,” he pointed out. “They’re satisfying both to play and to listen to. And when you combine all of that with the Romantic language of the composers who wrote for the string sextet, everything fits together perfectly.”

Tuesday’s program will open with Richard Strauss’s String Sextet from Capriccio, Op. 85, which serves as the introduction to the opera.

“It’s incredibly beautiful music in Strauss’s own inimitable language, but on the relaxed and calm side in contrast to his thornier pieces. It’s common for symphony orchestras to begin a concert with an overture — often the overture to an opera, but it’s difficult to find short, one-movement works to begin a chamber music concert. The Strauss is a perfect opener because you really couldn’t program three four-movement sextets. It would just be too long.”

The program will continue with Dvořák’s Sextet in A (Op. 48), which Canellakis said he is surprised is not programmed more frequently. “I love it, and I’m surprised it’s not played as often as the Brahms sextets, Tchaikovsky’s Souvenir of Florence, or even Dvořák’s other chamber pieces, because it’s one of his best. It’s an amazing combination of folk idioms with very sophisticated contrapuntal writing, something he does so well. It’s like a big hug — very warm, like you’re taking a walk in the sun.”

Since Brahms was a champion of Dvořák, Canellakis thinks it makes perfect sense to pair works by the two composers. “The first movement of Brahms’s Sextet No. 2 in G (Op. 36) shows the composer’s more serene, pastoral side. On the one hand, you can just enjoy it at face value because it’s so beautiful, but on the other, it’s so compositionally rich — it’s the best of Brahms. There’s not one fragment, not one motive that he doesn’t play with and evolve throughout the piece. His music always makes so much sense the way that it’s written.” 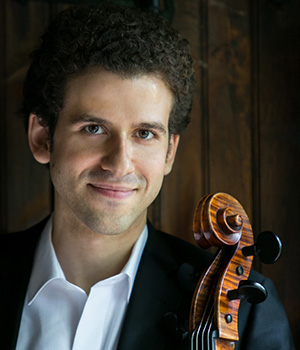 Except for six works by Luigi Boccherini which date from 1776, the string sextet was mostly invented by 19th-century composers. Canellakis has a couple of theories about why that is. “I think one reason is that the combination of instruments pairs so well with the language of Romantic composers. They were so innovative with their harmonies, and they could score those harmonies in so many different ways within the group.”

The cellist thinks that another possible reason is Beethoven, who perfected the string quartet. “How do you follow Beethoven’s 16 quartets? I think he became an intimidating figure for a lot of composers. They may have felt less threatened if they were writing for a quintet, sextet, cello quintet, or piano quintet. You see all of those combinations popping up a lot more after Beethoven. Certainly Brahms felt that if he wrote a quartet he would always be compared to Beethoven, but with a sextet, there was nothing to worry about.”

Nicholas Canellakis has played with the Chamber Music Society of Lincoln Center since 2009. “I won the audition for CMS Two, the young artist program, in 2008 and started the residency in 2009. I’m completely honored and flattered that I’ve been invited back to play every season since. I credit the Chamber Music Society with jump-starting my entire career, and it’s become an integral part of my life as a musician.”

In those seven years, the current sextet tour is his longest. “It’s a lot, with 10 or 11 performances including the Lincoln Center concert.” But he enjoys having the opportunity to play this repertoire more than just a few times. “What’s great about these pieces is that there’re so many different ways you can play them. When you have multiple performances, you get to experiment, and that keeps things fresh.”

Canellakis credits co-artistic directors David Finckel and Wu Han for assembling a fine group of musicians for this tour, as well as curating the wonderful program. “They do all the planning for the season including the tours. They figure out the personnel for each project and then they send us an email. I don’t think they ever get a rejection because everyone wants to play these concerts. They’re so nice, how could you say ‘No’? It’s a great group of colleagues. We always have a fun time finding restaurants on the road and going out to eat together.”

Aside from his career as a cellist, Nicholas Canellakis has developed a following as a droll comedian with a YouTube series that satirizes interviews with classical musicians. His duo partner, pianist Michael Brown, is his sidekick on the small screen as well. “I’ve always had an interest in film-making as well as in comedy,” Canellakis said, “and those two can very much go hand in hand. I remember a show called Between Two Ferns with Zach Galifianakis, and if you’ve seen that, you’ll know that my inspiration came from those mock interviews with celebrities. I wondered if I could pull off something like that with classical musicians. I didn’t aspire to any kind of grandeur, I just wanted to put some comedy out there.”

The hilariously deadpan Conversations with Nick Canellakis feature such classical music figures as Jonathan Biss, Alisa Weilerstein, Leon Fleisher, and Itzhak Perlman, as well as his Lincoln Center colleagues Wu Han and David Finckel. Along with Canellakis’s serious musical videos, they can be viewed here.

Franz Schmidt’s Symphony No. 4 showcased the ensemble, under guest conductor Jonathan Berman, in the standard conventions of a not-so-standard piece. But at the start of the program, the musicians were equal partners to pianist Cédric Tiberghien, whose playing could be as bold as the full orchestra or as intimate as any instrumental solo. END_OF_DOCUMENT_TOKEN_TO_BE_REPLACED

END_OF_DOCUMENT_TOKEN_TO_BE_REPLACED

Jackson began the program with a recitation of Langston Hughes’ poem “Helen Keller” — the first of five poems by Hughes that served as interludes between each piece on the first half. END_OF_DOCUMENT_TOKEN_TO_BE_REPLACED

Pianos with pins and tape on strings, a bass drum and tam tam, crotales, Almglocken, and vibes. Microphones were hooked up all around the instruments. The feed was sent to speakers around the room. Lighting designer Nicholas Houfek hung incandescent globes over the arrangement of instruments from thin black wires stretching across the beams. END_OF_DOCUMENT_TOKEN_TO_BE_REPLACED

From the podium, Elim Chan set an ambitious tone for the evening. The rising star conductor, here in her Cleveland Orchestra debut, has a commanding style, and every twist and turn in Saturday’s performance tracked closely with her baton. END_OF_DOCUMENT_TOKEN_TO_BE_REPLACED