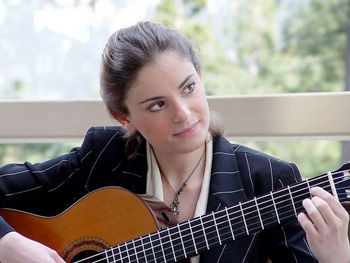 Growing up in a musical family will often cause children and younger siblings to reject music or embrace it fully. Luckily for audiences around the world, Croatian guitarist Ana Vidović did the latter. On Saturday, October 24 at 7:30 pm in Plymouth Church, Ana Vidović will present a recital featuring works by Sor, Moreno Torroa, Barrios Mangoré, Albéniz, Bach, Takemitsu, and Lauro. The performance is part of the Cleveland Classical Guitar Society’s International Series.

“The concert is coming up very quickly,” the engaging Vidović said during a telephone conversation. “I played in Cleveland nine or ten years ago. That concert was one of my first during a tour of the States. I’ll always remember it very nicely, so I’m happy to be back after all these years.”

Regarding her programming choices for Saturday’s performance, the guitarist said that all of the pieces represent the classical guitar in the best possible way. “Of course I program pieces that I enjoy playing, but I also consider what the audience will enjoy. I try to have a mixture of time periods and styles, including modern works and famous pieces from yesterday, so there’s something for everyone.”

Vidović will open her program with the virtuosic Introduction and Variations on a Theme by Mozart, Op. 9, by Fernando Sor. “It makes for a nice beginning, and the audience can hear right away what the classical guitar is capable of. It is technically demanding, but it is a lot of fun to play.”

Spanish composer Federico Moreno Torroa’s Sonatina has been part of the guitarist’s repertoire for some time. “I’ve played it for many years, although I did put it away for a while. It has a beautiful second movement and a virtuosic third movement.” Her program will continue with Paraguayan classical guitarist and composer Agustín Barrios Mangoré’s Una Limosna por el Amor de Dios.

Although Isaac Albéniz’s Granada and Asturias were written for the piano, Vidović said they sound very natural on the guitar. “I’m sure that many people know that they were originally piano pieces, but many guitarists play them and I think the instrument can breathe new life into them.”

Vidović will begin the second half of her program with J.S. Bach’s Prelude, Fugue and Allegro, BWV 998, and will follow it with Toru Takemitsu’s arrangement of the Beatles’ classic Yesterday. “Takemitsu arranged twelve popular songs that are all very famous and everyone knows, like Over the Rainbow. I like all the arrangements very much, but especially Yesterday.”

Following Barrios’s well-known La Catedral, Vidović will conclude her program with Antonio Lauro’s El Marabino and Vals Venezolano Nos. 2 and 3. “Lauro is from Venezuela, so they have a special flavor, and the waltzes make for a very nice ending.”

Our conversation moved on to the topic of growing up in a musical family: her father plays electric guitar, and her brothers play piano and guitar. Vidović is grateful to have grown up surrounded by music, and attributes that to her choosing music as a career. “I started playing guitar because of my older brother Viktor. He is a guitarist and was the first one of us kids to start playing an instrument. I loved its sound — I thought it was very soothing, so he inspired me to start playing.”

Her brother was also her first teacher, and Vidović credits him with instilling in her the basics of classical guitar playing. “I was too young to go to music school so I studied with him for about a year before I went. Of course in the beginning the technical things are very important, and he gave me a lot of information that made it much easier when I did attend music school.” Although Vidović is now based in the United States and the rest of her family is back in Croatia, they enjoy the times they can be together to make music.

Vidović’s talent was quickly recognized and she began giving concerts at age eight. She recorded her first CD at age fourteen, and two recordings later she released Ana Vidović — The Croatian Prodigy. I asked her about the word ‘prodigy.’ She said that the term didn’t cross her mind all that much, although she did want to distance herself from it. “My only fear was that because I did start so young, I wouldn’t be able to develop fully into a mature musician. But over the years my goal has always been — and still is — to excel in my playing and work on my craft, and I just want to continue to become better.”

As a young guitarist Vidović was also influenced by her pianist brother, who introduced her to great artists like Martha Argerich and Sviatoslav Richter. “He loves Martha and always talked about her, so I started listening to her recordings and I could really feel that there was so much there I could apply to my own playing. Of course I listened to the great guitarists, but I think there is a lot to learn from other instruments, especially the piano. Martha’s so musical, and her interpretations are unbelievable.”

Vidović also enjoys being inspired by great musicians from other musical styles such as jazz, blues, and rock. “I listen to everything and I do take a little bit from all of those styles.”

Does she have any plans to collaborate with non-classical musicians? “I do know a lot of musicians, and maybe working with a blues or jazz musician in the future would be interesting. It is a different world, but for now, just listening and learning from all of those styles really helps me.”

Jackson began the program with a recitation of Langston Hughes’ poem “Helen Keller” — the first of five poems by Hughes that served as interludes between each piece on the first half. END_OF_DOCUMENT_TOKEN_TO_BE_REPLACED

Pianos with pins and tape on strings, a bass drum and tam tam, crotales, Almglocken, and vibes. Microphones were hooked up all around the instruments. The feed was sent to speakers around the room. Lighting designer Nicholas Houfek hung incandescent globes over the arrangement of instruments from thin black wires stretching across the beams. END_OF_DOCUMENT_TOKEN_TO_BE_REPLACED

From the podium, Elim Chan set an ambitious tone for the evening. The rising star conductor, here in her Cleveland Orchestra debut, has a commanding style, and every twist and turn in Saturday’s performance tracked closely with her baton. END_OF_DOCUMENT_TOKEN_TO_BE_REPLACED