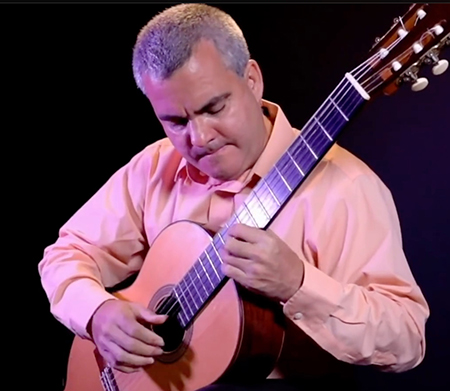 Cuban-American guitarist Edel Muñoz made his third rendezvous with the Cleveland Classical Guitar Society on Saturday, April 17. The first was a recital at Plymouth Church in November of 2012, the second a two-part engagement in July of 2014 when he performed for a CCGS benefit and gave a master class. Most recently, his appearance was virtual. At home in Puerto Rico, he recorded a 45-minute recital and connected online with guitar students from the Society’s educational programs.

As Muñoz told the students in a Q&A, he began playing popular guitar in Cuba at the age of 7, then moved on to classical when he turned 9. Early on, he impressed the likes of Leo Brouwer, who described the 13-year-old guitarist as “perfect” and “professional,” qualities that came through clearly in his recent performance. (The recording remains available on-demand here.)

Announcing his selections both in English and Spanish, Muñoz began his brief but varied program with Frank A. Wallace’s Black Falcon, which was written for him in 2013. In turn, his performance was dedicated to the memory of the composer, a prolific and much-loved figure who taught guitar at the New England Conservatory, played in the ensembles Quadrivium and Live Oak, and died in New Hampshire in June of 2020. (Read his obituary here.)

The piece is moody, restless, and ruminative. After an atmospheric beginning, accented chords with recitative-like elements in between usher in a rhythmic section that deconstructs into melodic fragments. The piece ends with increasingly dissonant chords.

For a complete contrast, Muñoz moved on to an expressive performance of Julio César Oliva’s Vengo a decirte que te quiero (“I come to tell you that I love you”), playing with much rubato and emotion.

Antonio Lauro’s Variaciones sobre una canción infantil offered the composer’s four impressions of a children’s song, each in A-B-A form and set in various textures: the melody over an alberti bass, sprightly and chordal, minor and serious (but turning into the major with an injection of sentimentality), and scherzo-like with bouncy, upward gestures.

Muñoz ended with a well-known, expansive work: Manuel Maria Ponce’s Sonatina meridional, requested by Andrés Segovia and invoking sunny scenes from the South in its three movements, Campo, Copla, and Fiesta. Here, as throughout his program, Muñoz played efficiently, concentrating his energy in his fingerwork and only betraying the complexity of the music through subtle facial expressions. He made his job look effortless. 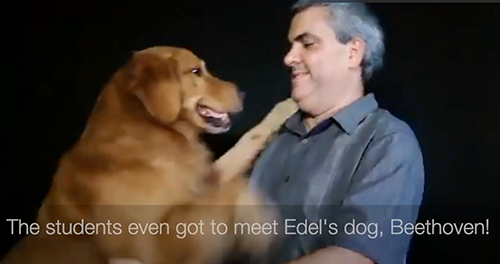 After the program, CCGS supplied some glimpses of its educational programs that enjoyed input from Edel Muñoz during both his in-person and virtual visits. One of those, like many online meetings of the pandemic era, was Zoom bombed — in this case charmingly, by Beethoven, the guitarist’s golden retriever.

With this work, premiered in 1907, Sibelius offered a bold departure from the explosive emotionalism so prevalent in late-Romantic era music. This symphony was a renewed embrace of Classicism’s purity of form and melody, and one that, oddly enough, left many initial audiences of the day somewhat bewildered. END_OF_DOCUMENT_TOKEN_TO_BE_REPLACED

After eating a Po’boy from The Dawg Bowl Cajun food truck, I caught the first half of Brian Culbertson’s show in The Connor Palace Theatre. END_OF_DOCUMENT_TOKEN_TO_BE_REPLACED