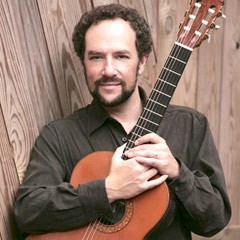 “The guitar is an amazingly expressive instrument,” William Kanengiser said during a telephone conversation. “I’ve learned from my years with the Los Angeles Guitar Quartet that without the right program, the instrument can begin to sound a bit monochromatic. That’s why it’s important to present a lot of different styles — to show that it’s actually a chameleon-like instrument.”

On Saturday, February 18 at 7:30 pm at Plymouth Church, the two-time Grammy-winning guitarist will perform a program featuring music from Spain and North America. The concert is presented as part of the Cleveland Classical Guitar Society’s International Series.

In addition to programming works that will highlight the “chameleon-like” characteristics of the guitar, Kanengiser said that he also likes to connect the works with a theme. “The first half features music expressing the essential Spanish elements that are such a big part of the repertoire.”

The guitarist described Dionisio Aguado’s Fandango Variado as an evocative, fun work that makes a wonderful curtain-raiser. He said that Joaquín Turina’s Fantasia Sevillana is “the most elementally Spanish piece on the first half. Turina melded the two styles of his compositional personality: traditional Flamenco music from Seville and the burgeoning French impressionism.”

The program will continue with music by one of the most beloved composers for the classical guitar, Francisco Tárrega. “¡Marieta!, Lágrima, and María are little character studies about his family — Marieta his wife and María his daughter. Lágrima means teardrop, and I like to call it the saddest piece I know that’s in a major key.”

Keeping with the theme of sadness is Fernando Sor’s Fantasie Elegiaque, composed in memory of his favorite piano student, who had passed away during childbirth. “The piece is his reflection of grief and loss, but it’s also a celebration of his student and their time together. It’s a programmatic piece that expresses all sorts of emotions.”

Music of North America will begin with Léo Brouwer’s Afro-Cuban Lullaby and Danza Carecterística. Kanengiser will continue with Ernesto Garcia de León’s Sonata No. 1 “Las Campanas,” where the composer recalls hearing the bells of the little church in the town square where he grew up in in Mexico. “It’s also inspired by the memories of his family singing little songs — and fighting,” said the guitarist. “In the second movement, there’s a quote from The Beatles’ Norwegian Wood, one of de León’s favorite songs from his teenage years. The final movement is based on a son, a traditional dance that features the classic Latin rhythm found in Bernstein’s America.”

The final four works on the program are by American composers, all of whom happen to be Kanengiser’s friends. He’ll start off with Frederick Hand’s Missing Her, a jazz ballad with lush harmonies that includes an improvised section in the style of Bill Evans.

Next will be The Magic Serenade, in which composer Bryan Johanson asks the performer to attach a capo on the seventh fret. “This gives the instrument a more transparent and lighter sound. It also allows me to pluck the strings on the wrong side of the capo, which produces a magical, harp-like effect. It’s a very sweet but entrancing piece.”

Brian Head’s Lobster Tale is a synthesis of Nashville-style stomp and sweet New England plain-song. Finally, his Brookland Boogie (Sketches for Friends) is “an up-tempo version of Miles Davis’ So What,” said Kanengiser. “It’s a fun piece with an improvised solo and backbeat foot tapping.”

In celebration of the guitarist’s solo debut in Cleveland, CCGS will present a free showing of the 1986 movie Crossroads, starring Ralph Macchio, on Friday, February 17th at 8:00 pm in Donahue Auditorium of the Dolan Science Center at John Carroll University. Kanengiser, who served as Macchio’s guitar coach for the film, will be on hand for the screening. A free reception will be held in the Reading Room following the event.

A cult classic, Crossroads tells the story of a Juilliard-trained classical guitarist who yearns to play the blues. How did Kanengiser land the job as Macchio’s guitar coach?  “It was one of those dumb luck kind of things,” he said. “I was just a few years out of college when I got a call from one of the piano professors at school who had worked on the film The Competition. He said the producer of Crossroads asked him if he knew a classical guitarist for a movie, and they needed someone right away.”

Kanengiser and Macchio got together on several occasions for the guitarist to assist the movie’s star at perfecting his classical air guitar chops. “For the blues guitar segments he used a slide, and was actually really good at mimicking the movements. But he was nervous about the classical music, so I came up with a way that would make his hands look reasonably close to a classical guitarist’s.”

Kanengiser recorded the version of Mozart’s Turkish March that’s used in the movie, and he said there is less than a one-second shot of his hands. “It was a lot of fun and I did get to meet the guitar supergod Steve Vie. We had fun trying to figure out the final scene, where Ralph’s character does Faustian battles with the devil. In the end, it is Ralph’s classical training that he pulls out of the bag to beat the devil. The movie has taken on a cult following, and to see it again is going to be a wonderful experience of nostalgia and embarrassment.”

I concluded our conversation by asking William Kanengiser if he had any news to share regarding the Los Angeles Guitar Quartet. “The big news is that Pat Metheny has written a 6-movement, 28-minute epic work for us called Roads to the Sun. We premiered it this past fall, and I think it’s going to be an important piece in the repertoire. It was great to get to work so closely with Pat. We’re still pinching ourselves over it.”

Jackson began the program with a recitation of Langston Hughes’ poem “Helen Keller” — the first of five poems by Hughes that served as interludes between each piece on the first half. END_OF_DOCUMENT_TOKEN_TO_BE_REPLACED

Pianos with pins and tape on strings, a bass drum and tam tam, crotales, Almglocken, and vibes. Microphones were hooked up all around the instruments. The feed was sent to speakers around the room. Lighting designer Nicholas Houfek hung incandescent globes over the arrangement of instruments from thin black wires stretching across the beams. END_OF_DOCUMENT_TOKEN_TO_BE_REPLACED

From the podium, Elim Chan set an ambitious tone for the evening. The rising star conductor, here in her Cleveland Orchestra debut, has a commanding style, and every twist and turn in Saturday’s performance tracked closely with her baton. END_OF_DOCUMENT_TOKEN_TO_BE_REPLACED