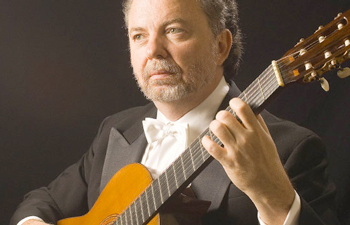 When Cuban-born classical guitarist Manuel Barrueco made a cameo appearance with Cuarteto Casals on the Cleveland Chamber Music Society series in November of 2013, concertgoers got a tantalizing taste of his artistry in a Boccherini quintet and a single solo piece. In our review, we wished for a solo appearance by one of the world’s great guitar gurus. That finally happened on Saturday evening, April 16 when Barrueco played a distinguished program on the Cleveland Classical Guitar Society’s International Series at Plymouth Church in Shaker Heights.

Barrueco, who teaches at the Peabody Institute, divided his relatively short program into a Baroque and Classical segment before intermission, with Spanish music of the 19th- and 20th- century Spanish music after.

Barrueco began his concert with his own transcription of lutenist Sylvius Leopold Weiss’s Suite VII in d, one of some 800 pieces that survive from the composer’s pen. This suite of dances includes an Allemande, Courante, Sarabande, and Gigue, all elegantly played by Barrueco, who layered their contrapuntal lines transparently, brought out their inner details, and decorated them with tasteful and improvisatory ornamentation. The Sarabande was a standout — a fascinating combination of solemn and playful.

Weiss and Johann Sebastian Bach were almost exact contemporaries: Bach was born in 1685, a year before Weiss, and both died in 1750. The two composers met each other in 1739 through Bach’s son Wilhelm Friedemann — and some accounts have it that Weiss cheekily challenged Bach to an improvisation contest.

We can only imagine who won that contest, but for sheer weight and high seriousness, Bach prevailed on Saturday evening in Barrueco’s arrangement of the Chaconne from the second Violin Partita. The guitarist adopted a stately, steady pace for the first set of variations, producing utterly clear passagework and using vibrato sparingly to warm important notes. He slowed the tempo for the major-key variations, then expertly snuck back into the minor to end the piece. The intensity of Barrueco’s performance held the attention for all of the Chaconne’s 14-minute duration.

To lighten the mood, Barrueco turned to Fernando Sor’s Variations on a theme by Mozart, Op. 9, the theme being “Das klinget so herrlich” from The Magic Flute. Here, the guitarist charmed the ear with easy, graceful runs and got a chuckle of surprise when he played the last two chords forte then piano.

Spanish zarzuela composer Federico Moreno Torroba’s Suite Castellana from 1926 began the second half with a Fandanguillo (modeled on the Fandango), Arada (a songlike intermezzo), and Danza (yes, a dance). Torroba’s skill in writing vocal melodies was put across vividly in Barrueco’s sensitive playing, and the guitarist made the Danza scintillate with lively repeated notes and a cute, curt ending.

Three individual works by Joaquín Turina continued the Andalusian theme. His Fandanguillo, Op. 36, Soleares, Op. 69, and Rafaga, Op. 53 all derive from fandango and gave Barrueco the opportunity to tap on the guitar body, play bravura runs, strum up a storm, and end with lovely harmonics.

To end the evening, Manuel Barrueco brought his huge tone to bear on Isaac Albéniz’s Mallorca, Op. 202, and two movements from Suite Española, “Cataluña” and “Sevilla.” Spirits ran high and the guitarist’s expressive recitative in the middle of the last piece was one of this concert’s highlights.

The ovation from Barrueco’s many fans in the large audience encouraged him to play two more works, Scherzino Mexicano by Manuel Ponce and a piece by Manuel de Falla.

Manuel Barrueco’s portion of the evening was delayed by fifteen minutes in order to present two students from the Guitar Society’s Boys & Girls joint program. Jomaliz Soto and Jineliz Claudio charmingly showed off what they had learned so far in their studies.

It might seem that there’s not a lot left to discover after three decades of experience with the Red Priest’s charming and evocative score, but this performance boasted a secret weapon: the young Spanish violinist Francisco Fullana, now the Orchestra’s artist-in-residence, whose affecting personality and easy virtuosity raised the solo part a quantum leap above the merely extraordinary. END_OF_DOCUMENT_TOKEN_TO_BE_REPLACED

END_OF_DOCUMENT_TOKEN_TO_BE_REPLACED

The Cleveland Orchestra’s second performance of the new season on Sunday afternoon, October 17 at the newly renamed Mandel Hall at Severance Music Center was just such an occasion. If the ensemble’s return to public concerts under the baton of Franz Welser-Möst wasn’t enough reason to light a bonfire, the Cleveland debut of a new work written for one of the Orchestra’s most popular soloists, and the swan song of one of its longest-serving members added extra fuel to the celebration. END_OF_DOCUMENT_TOKEN_TO_BE_REPLACED