“I always say that our concerts are for adventurous listeners who like a smorgasbord of the unexpected,” Composers Guild vice-chair Margi Griebling-Haigh said during a telephone interview. “We try not to repeat pieces on our concerts, so Sunday will be the first time that Guild members will be hearing these pieces as well.”

Griebling-Haigh said they are fortunate to once again present their opening concert in Drinko. “It’s a wonderful space, and the acoustic is terrific. They have a great recording engineer and it’s easy to get to from both the East and West Sides.”

Putting her on the spot, I asked Griebling-Haigh if there are any works she’s especially looking forward to hearing. “There’s a lot of good stuff on this program so I’m excited to hear all of the pieces,” she said. “I am looking forward to hearing Sebastian Birch’s string quartet, because I don’t know his music. And Scott Michal has written a harpsichord piece — we haven’t had a harpsichord piece in, well, living memory.”

The program also includes two compositions with family ties. One is Matthew Saunders’ And I Live With the Fiction that I Never Get Mad — the poetry is by the grandmother of baritone Loren Reash-Henz, who will sing the work. The other is Griebling-Haigh’s Rhapsody, to be performed by violinist Peter Otto and pianist Randall Fusco. “I wrote it last year for my daughter’s wedding. Peter and Randy performed it then, and I’m so happy they’ll be playing it in public.” 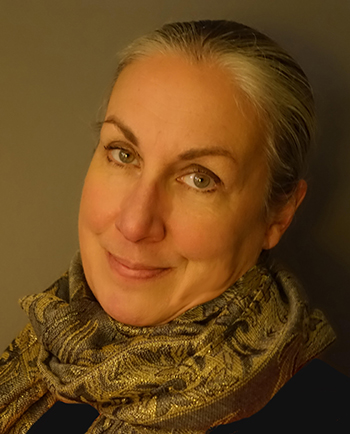 Traditionally the Guild uses two types of curatorial formats for their programs. Sunday’s is an open concert. “We put out a call for scores to the membership, who submit works via PDF. Then a three-member concert committee is chosen from members who have not submitted scores.” The committee is then charged with creating an interesting and varied program that fits the budget and time constraints, and when possible, includes members whose music has not recently been performed. The selected composers are responsible for finding their performers.

The second format is a collaborative one. Here the Guild asks an established ensemble if they would be willing to play a concert of music by CCG members and if so, how much they would charge. “We submit the music to them blind — all they know is the title and the timing. They make the final repertoire decisions.”

Another Guild activity is the annual Collegiate Competition. “This is our seventh competition and it’s been a good way to get college students interested in the Guild. There is no application fee so you have nothing to lose by entering. If you do win, you get money, a premiere performance by great players, and a recording.” The submission deadline for this year’s Competition is December 1, 2019. Click here for more information.

The Guild’s membership spans from full-time composers to private teachers, and from band and choral directors to people who simply enjoy writing music. “That includes people like myself who don’t have a degree in composition, or people who come to composing later in life,” Griebling-Haigh said. “Anybody can apply — it’s nice and inclusive.” Applicants will be asked to submit a portfolio to the Guild’s membership committee. Click here to learn more.

A lot has changed since the Cleveland Composer’s Guild was founded 60 years ago. “When it began, the Guild did tend to be a much smaller club,” Griebling-Haigh noted. “Now we try to be more inclusive — there is such a wealth of talent in this area, and lots of people deserve to have their music heard.”

Program details for Sunday’s concert are as follows:

This Morning is Beautiful by Margaret Brouwer, performed by Brian Skoog, tenor, and John Simmons, piano

And I Live With the Fiction that I Never Get Mad by Matthew C. Saunders, performed by Loren Reash-Henz, baritone, and Benjamin Malkevitch, piano

END_OF_DOCUMENT_TOKEN_TO_BE_REPLACED

Supported by engagingly, yet simple staging by Cara Consilvio, a well-prepared cast of singers told the archetypal story of Cinderella with charm and flair. Framing the production was  a sparse but colorful set and wonderful lighting by Dave Brooks. END_OF_DOCUMENT_TOKEN_TO_BE_REPLACED