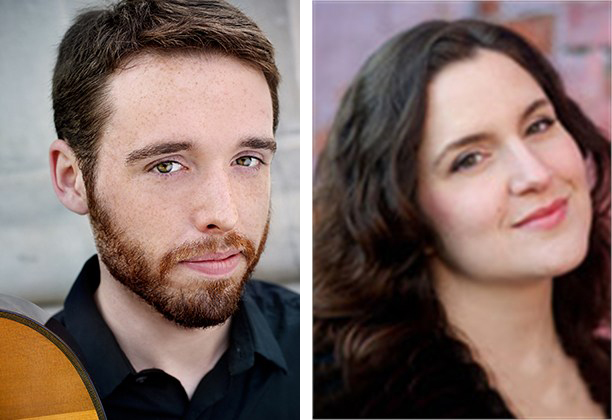 It’s a privilege to be asked to perform the closing concert of any festival. It also requires the artists to create a program that both celebrates the past and looks to the future. At this year’s Cleveland International Classical Guitar Festival, the honor of presenting the final concert has been bestowed upon guitarist Colin Davin and soprano Estelí Gomez. The Festival runs from Friday June 8 through Sunday June 10 at the Cleveland Institute of Music. Tickets can be purchased online.

On Sunday, June 10 at 7:30 pm in Mixon Hall, Davin and Gomez will present Nomads by Nature. The evening will include repertoire standards — some with a new twist — as well as two World Premieres which are grounded in 21st century cultural esthetics.

In a joint telephone conversation, Davin and Gomez said the program’s title is taken from a line in the text of Henri Duparc’s L’Invitation au voyage which opens the concert. Davin first encountered Duparc’s setting of Charles Baudelaire’s poem when he was asked to play at the 90th birthday party for French painter, critic, and author, Françoise Gilot. “They requested some French music and we settled on this piece,” Davin said. “I agreed to do the arrangement without knowing what I was getting myself into — the piano part is not particularly natural on the guitar. But since then it’s become more refined.”

The program moves to the Romantic period by way of two selections from Clara Schumann’s Sechs Lieder and two from Robert Schumann’s Liederkreis. “I was excited that Colin agreed to arrange these because they are gems of the art song repertoire,” Gomez said. “Obviously Robert’s Op. 39 is extremely well known. And while Clara’s Op. 13 is less known, they are little worlds in and of themselves. They’re not done a lot with piano and they are never done with guitar.”

Libby Larson set her Three Rilke Songs for guitar and high voice to the poetry of Bohemian-Austrian poet and novelist Rainer Maria Rilke. And while the piece was written 1980, much to their surprise, Davin and Gomez were unable to find any recordings or performance history of the piece. “When we were planning this program I did some poking around the voice and guitar section in the library at CIM and I found this barely-touched score — I think it was checked out once: there were no pencil markings or anything, but I thought it looked interesting,” Davin said.

The artists agree that Larson’s settings are both beautiful yet in many ways strange. “There’s a lot of activity and the music doesn’t stay in one place for very long,” Davin said. Gomez added that the translation of the poems, originally in German but to be performed in English, can come across as somewhat formal. “But we’re having fun with them because they can be shaped however we want them to be shaped,” she said.

Gomez looks forward to singing Manuel de Falla’s Siete canciones populares españolas. “It’s always wonderful to sing in Spanish since I grew up speaking both it and English. Whether it’s a folk song or art song it’s always a pleasure, and this piece is kind of both.”

The program’s first World Premiere will be Richard Beaudoin’s Three Moraga Songs. Gomez said that she first met the composer though her work with the Grammy-winning vocal ensemble Roomful of Teeth. “I always had the sense that he had so much to say as a composer setting text, which is not what I usually get when working with a Roomful composer — the ensemble is all about abstracting sounds and combining them with various extended techniques.”

While Davin and Gomez said the process of creating the work was long, it had been well worth the journey. “In my experience of working with composers this has been one of the most in-depth processes,” Davin said. “Particularly when it came to finding the poets and the poetry — I read a lot more poetry than I usually do.”

The process of searching for the right poems became personal for Gomez. “I even got my cousin involved,” the soprano said. “She’s a professor of translation of Latin American Literature, so I thought ‘what better person to help us find a female bilingual poet who is maybe still living.’”

Through her guidance, Gomez, Beaudoin, and Davin were introduced to poet and essayist Cherríe Moraga, a founding member of La Red Xicana Indígena, an organization fighting for education and cultural rights. “The poems are astounding,” Gomez said. “We have come to understand that this is a seminal book in the context of bilingual identity associated with Xicana literature. We could have never found this on our own— you don’t just search for free-domain Xicana literature. It’s also so personal because I am a Latinx woman from California. This is really special for me.”

Davin described the music in Benjamin Britten’s Songs from the Chinese as being inspired by the far east, but said there are few explicit references to Chinese music. He also noted that the work is very well written for the guitar except for one place. “The 5th song, ‘Depression,’ is not great. The guitar part is almost entirely made up of glissandos between two chords. I’ve never been satisfied with how it sounds even when played by the best guitarists in the world.

Davin began to experiment. “I was at my dad’s house — he had started playing around with a steel guitar — so I asked if I could play around with it. I did and thought, hey, this metal slide bar is kind of handy. Then it occurred to me that it could be useful in the Britten. I know this is sacreligious, but I will put the guitar on my lap and play it with a metal slide bar.”

The second World Premiere, Becca Stevens’ Three Songs, is set to poetry by Jane Tyson Clement. “I came to know her music through my old roommate in NYC,” Davin said. “He would suggest musicians to check out and Becca was one of them.”

Over time it became clear that both Davin and Gomez had numerous sixth-degrees of separation with Stevens, which included the members of the Attacca Quartet — Stevens is married to the violist. Still it took an off-chance meeting in a coffee shop between Davin and the Quartet’s cellist to get the commissioning ball rolling. “I seized the opportunity. We were introduced through email and it grew from there.”

It was not until last week that Gomez and Stevens met for the first time. “I was doing concerts in the Netherlands with Roomful and Becca was performing on the same festival,” Gomez said. “Since everything had been done through email It was nice to meet in person and talk about how much of Three Songs needed to be notated — she does her own stuff all of the time so there’s not much need for her to notate everything.”

Davin noted that Stevens wrote the guitar parts on three different plucked instruments: ‘For You the Night Is Still’ was written on a charango, ‘I Am No Artist’ was written on the guitar with an alternate tuning that requires a capo to be placed halfway up the neck, and ‘Response to Criticism’ was written on the kora. “I will play the guitar on the last two, but I will play charango on the first. It’s great because Becca was working on a project with David Crosby, and the charango I borrowed from her once belonged to him.”

Davin and Gomez will close their program with the hauntingly beautiful Bachianas Brasileiras no. 5 of Heitor Villa-Lobos.

The Cleveland Orchestra’s second performance of the new season on Sunday afternoon, October 17 at the newly renamed Mandel Hall at Severance Music Center was just such an occasion. If the ensemble’s return to public concerts under the baton of Franz Welser-Möst wasn’t enough reason to light a bonfire, the Cleveland debut of a new work written for one of the Orchestra’s most popular soloists, and the swan song of one of its longest-serving members added extra fuel to the celebration. END_OF_DOCUMENT_TOKEN_TO_BE_REPLACED

Cleverly, CityMusic’s latest concert led listeners through these changes one step at a time. “Musical Matrix” took transformation as its theme, and each piece on the October 2 program at the Maltz Performing Arts Center (the second of two performances) put its spin on the subject. END_OF_DOCUMENT_TOKEN_TO_BE_REPLACED